There are more than 100 different species of poison dart frogs. These types of frogs didn’t earn their name from speed, but rather from traditional techniques used by native peoples who would rub their darts across the frogs to obtain the poison for use in hunting. A dart frog’s poison comes from its diet in the wild. Ants and other small insects have chemicals in their bodies that the frogs are immune to, but it results in the many species’ own toxicity. While only a handful of species are toxic to humans, many animals who attempt to consume the frogs become ill with nausea, swelling, numbness or temporary paralysis. Only a few dart frog species are deadly, and one any animal or human would want to prevent coming into contact with would be a wild golden poison frog, the Phyllobates terribilis, which is the most toxic of all the frog species.

Golden poison frogs are native to lowland tropical rainforests in Colombia, South America. This frog species has many names, including the golden poison arrow frog and simply the golden dart frog. This species, like other dart frog species, is brightly colored. Instead of camouflaging with its environment like many animals, the bright yellow or golden color is a warning display to deter any potential predators from attempting to eat them. But what if we told you this species actually comes in another color too?

The mint phase is a unique adaptation of this species. The mint, metallic green, pale green or white-colored golden dart frogs are only found in the La Brea locale of Colombia and are a different color variation of the same species.

Whether golden or mint, this species toxicity is 20 times stronger than its other dart frog counterparts. Just one frog, which can measure up to two inches in length, has enough poison to kill 10 grown men. The good news for our Zoo Keepers is that these frogs are non-toxic in human care because of their diet, which consists of fruit flies, beetles, crickets, wax worms and wax worm moths.

At the Virginia Zoo, there are just over 50 individuals of this species: 34 golden dart frogs and 20 mint golden dart frogs. Most are unsexed juveniles, and a dozen are adults capable of breeding. In 2019, five of those adults made the 22 mile journey from the Virginia Aquarium and Science Center to their new home in the Zoo’s World of Reptiles Frog Lab. Other adults arrived earlier, starting in 2013, from the Santa Ana Zoo and Metro Richmond Zoo. 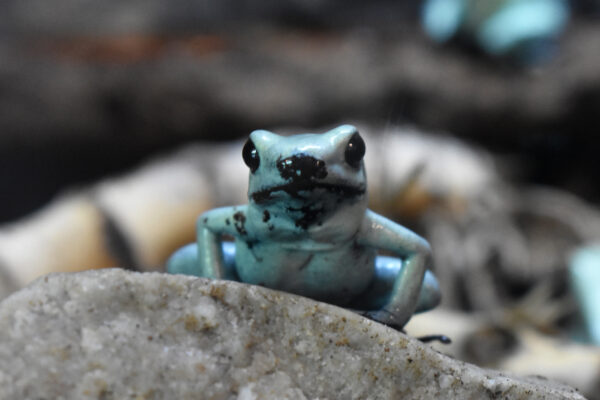 In the near future, the Zoo will be sending around 20 individuals to other zoos for breeding and educational purposes. While there is no Species Survival Plan® for this species, which is listed as endangered according to the International Union for Conservation of Nature’s Red List, the Virginia Zoo and many other facilities have breeding programs to create assurance colonies, which prevent the species from becoming extinct.

Depending on the day, Keepers will see these dart frogs breeding, hunting for their food or resting among the bromeliad foliage in their exhibits. Coconut huts are also a popular shelter for these animals when they do not want to boldly sit out in the open.

« Sweet and Salty Explore Norfolk’s Backyard Like Never Before »