Singin’ in the Crane

Just as the actors in old-time movies often had to be what is called a triple threat – able to sing, act and dance – the sarus crane also does the same….in a similar way.

The sarus crane is the tallest flying bird and the largest species of crane, standing up to six feet tall and weighing up to 26 pounds. This particular species can be identified by its gray body and wings, black neck ring, black wingtips and striking red and bald head. It is hard to tell where the natural habitat of this species would be based on its looks, but they are endemic to wetlands, marshes, swamps and flooded plains in northern Australia, southeastern Asia in Cambodia, Vietnam, Myanmar and countries in the Indian subcontinent including Pakistan, India and Nepal.

So how is this bird so amazing at singing, dancing and acting? Sarus cranes have some of the best vocal abilities in the animal kingdom. Not only can they make a range of sounds from hissing to purrs and screams, but they are known for their loud trumpeting calls that can carry for several miles, which aids in declaring territory or seeking a potential mate.

As for their dancing skills, sarus cranes are always on beat. When they find a potential mate, an intense and elaborate dance begins between the pair that includes deep bowing, head bobbing, leaping, running with their wings flapping and short flights accompanied by their loud, trumpeting calls. Dancing strengthens a pair’s bond over their lifetime, as these birds mate for life, and many times make a good impression on their chicks, who often mimic the dance!

The word acting has a different meaning in the animal kingdom than it does in Hollywood, and in this sense, these birds are known for their active lifestyles and ability to seek food sources. Sarus cranes are omnivores, eating anything from frogs, lizards, grasshoppers, insects, fish, water snakes and eggs of other birds, but also rice, seeds and aquatic plants.

Despite their excellent skills and adaptations, these birds are finding themselves in tougher conditions every day. Habitat destruction and conversion for agricultural purposes, as well as pollution, hunting and collection of eggs, chicks and adults for food, medicine and the illegal pet trade have led this species to be listed as vulnerable to extinction by the International Union for Conservation of Nature’s Red List of Endangered Species. It is estimated that there are less than 20,000 cranes left, and while complete protection of this species is difficult due to different countries’ laws, sarus cranes are protected in parts of their range.

Zoological institutions across the globe have also taken on the responsibility of helping this species. The Association of Zoos and Aquariums’ Species Survival Plan ® (SSP) oversees and manages species’ population in zoos by pairing individuals and monitoring breeding to maximize genetic diversity and long-term sustainability of populations. The SSP also ensures the species’ survival in the wild through supporting conservation efforts such as programs that protect or restore habitats. The Virginia Zoo is a participating institution and has two sarus cranes. 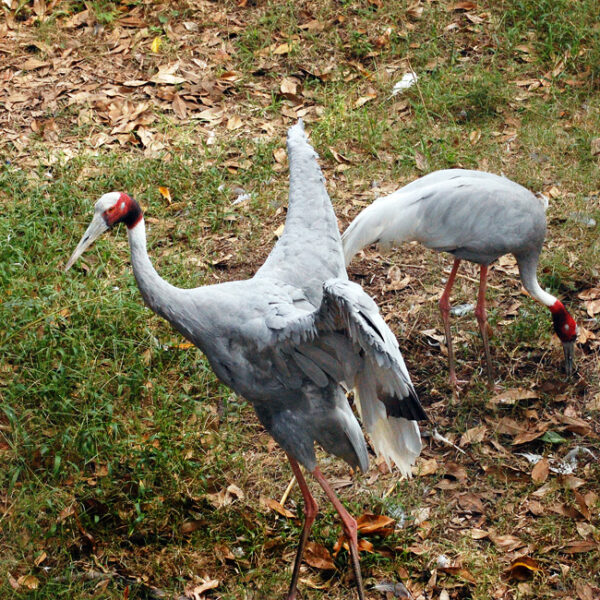 Ichabod is a nine-year-old male sarus crane. He arrived at the Virginia Zoo in February 2012. Ichabod stands around six feet tall and weighs almost 18 pounds. For enrichment, he enjoys foraging for superworms in a pile of leaves, but also eats a pelleted diet specifically created for cranes, as well as frozen and thawed pinkies, which are very young mice.

Sally is Ichabod’s mate. She is 10 years old, slightly shorter than Ichabod and weighs 15.5 pounds. She eats the same foods as her mate, but for enrichment, prefers dipping items such as oyster or mussel shells into a water bowl. The pair can also be seen standing around their water sprinkler and can always be heard around the Zoo, sometimes surprising nearby guests and staff by their sudden and very loud calls.

Ichabod and Sally can be seen on-exhibit year-round along the Asia-Trail of the Tiger. They may, on occasion, also have a fellow bird guest in their exhibit – a male peacock – who drops in every now and then to check on the pair and see what delicious food the Keepers have left out for them.

« Case-a-Dillo New Bird is the Word »