Not Your Typical Basilisk

When you hear the word basilisk, you may initially think of the giant serpent from legends and myths that is also featured in a popular book series, Harry Potter. While that basilisk is considered fictional, there are real basilisks today that walk across the land, and even water. There are multiple species of basilisks including the common basilisk, brown basilisk, western basilisk, and a species you can find at the Virginia Zoo: the green or plumed basilisk.

The plumed or green basilisk earned both of its names from its appearance: as an adult, it is bright green in color and has four crests protruding from behind the head, back, dorsal and tail. This lizard species also has another name – the Jesus Christ lizard, for its unique ability to run across water when escaping predators or finding food.

If frightened while on land, basilisks can run on their hind legs, sprinting so rapidly that they can move at speeds of over 7 miles per hour. That speed, along with specialized scales on the bottom of their feet, allows them to run across a fair distance of water before breaking the surface tension and having to swim the rest of the way. The lizards can also stay submerged under water for up to 10 minutes.

This lizard species is native to tropical rainforests of Costa Rica, Honduras, Nicaragua and Panama. They are considered to be semi-arboreal and semi-aquatic, and are typically found near bodies of water. Their habitat boasts a variety of items to eat. A basilisk’s diet ranges from meals they can find on land, such as insects, spiders, smaller lizards and small mammals, to fare they can find in water such as crawfish and snails.

Plumed basilisks are listed as least concern according to the International Union for Conservation of Nature (IUCN) Red List for Threatened Species. This means their species is not threatened with extinction, but they do have threats such as the pet trade and habitat loss due to human development. 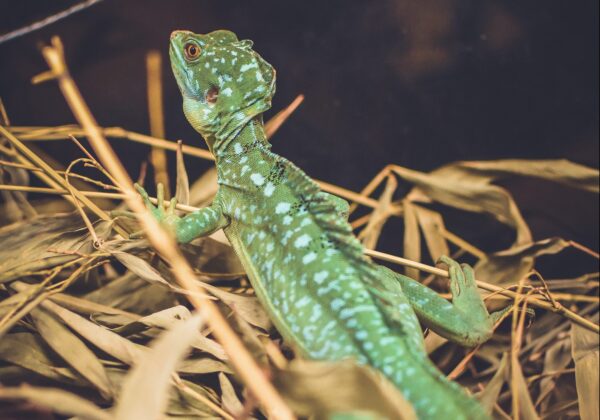 There are currently two basilisks at the Virginia Zoo, a male and a female. The male arrived at the Zoo from Zoo Atlanta in January 2018. At thirteen years old, he measures 27 inches in length. He is fed a diet consisting of crickets, superworms and nightcrawlers, and enjoys being misted and sprayed with water by Keepers. Keepers also say he bobs his head to communicate with them.

The female arrived at the Zoo in May 2018 from the Albuquerque Biological Park Zoo. At three years old, she measures 24 inches long. She is also fed the same diet as the male and also enjoys being misted by Keepers. Keepers say her favorite hobbies seem to include basking under the heat lamp in the morning, then hiding or napping behind the rocks in the exhibit as the day goes on.

The male and female are both currently on exhibit towards the beginning of the World of Reptiles, but will soon move into a shared exhibit with the Caiman lizards and matamata. Stop by this heated exhibit space to see the basilisks and other unique reptile, amphibian and even mammalian species!