Making a habitat a home

April 7, 2016
Chester and Rico, our new cheetahs, have moved into their home and have been eagerly checking out the space and all it has to offer. But what had to happen before they could move in? More than you probably think!
Since cheetahs can jump more than seven times their body length (up to 20 feet), a few modifications had to be made to the fence. From the pathway, you can’t tell, but the ground drops about eight feet and the moat is approximately 15 feet wide. It was drained, cleaned and refilled with nine feet of water. 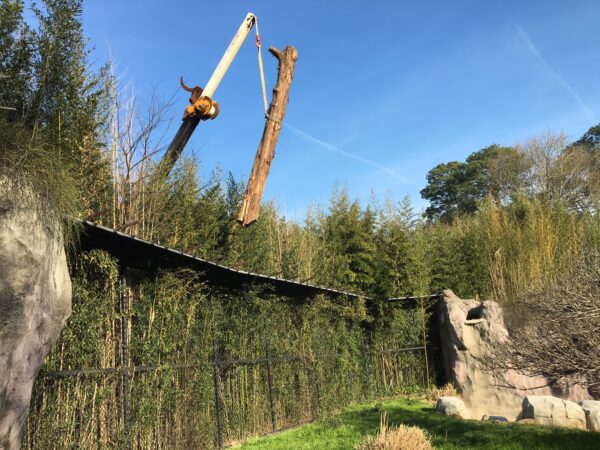 The exhibit had to be cleared of any debris and a lot of vegetation was removed. New deadfall – or trees – were placed in exhibit for the cheetahs to sit, scratch and perch on. For this exhibit, we used cedar trees that were downed in another area of the Zoo. They were placed using a crane.
Most recently, this exhibit featured storks and cranes. However, it was originally built as a primate house so the holding facilities also needed to be modified. Two tables were built by Zoo staff to serve as steps onto the platforms that the mandrills used to sit on. The feeding chutes were adapted for easy use by the cheetahs.
“I’ve been involved in a lot of the construction of new spaces or exhibits, so it was really cool to have the chance to modify an existing exhibit that was originally built for something else,” said Keith Krause, Operations Manager at the Virginia Zoo. “It’s really interesting to learn about the adaptations necessary for each animal.”
« Animal Ambassadors Make Appearance at Glass Wheel Studio Cheetahs arrive at the Zoo for the first time in history »