The Best Place to Bee

You’re probably familiar with the fact that more than 700 animals representing 150 species can be found at the Virginia Zoo, but did you know there are also more than 30,000 pollinators that also live on Zoo grounds? They may not be the most exotic animals at the Zoo, but the bees that live in the Virginia Zoo’s beehive are equally just as interesting and important as all of the other fauna found here.

For more than 25 years, local beekeeping organizations, such as the Norfolk Beekeepers, have tended to hives at the Apiary in Flora Point, but it wasn’t until recently that Zoo guests were able to see what all the buzz is about. The Zoo installed what is called an observation hive in the ZooFarm barn, the perfect location for a beehive.

Observation hives aren’t optimal for bees, but they can thrive in these types of hives with proper care. Bees prefer the inside of the hive to be dark, so the Zoo made sure the observation hive was in a covered area and staff also outfitted the hive with blackout curtains to give the bees some privacy. The hive is also easy to maintain and is cleaned once a year by the beekeepers.

The Zoo chose this type of hive as a new medium for visitor experiences and education. Part of the Zoo’s mission is to educate the public on species, their niche and how to conserve them for the future and this beehive checks off every item on the list. Visitors are able to see the bees in various developmental stages, watch them turn nectar into honey and even spot the queen bee, who is “wearing makeup”. The queen is difficult to pick out by the untrained eye, so she has been marked with a bright orange dot on her back to help distinguish her from the rest of the hive.

These bees are European honey bees, a species that hitched a ride to North America via settlers’ ships all the way back in the 1620s. The most common bee species, European or Western honey bees are pollinators. Pollinators are responsible for helping the foods we eat grow. In Virginia, honey bees pollinate 80 percent of the food crops grown in the state and the other 20 percent is pollinated by other insects including butterflies.

Honey bees are also known for creating that sticky, sweet substance known as honey. The average honey bee makes five drops of honey in the average lifetime of about six weeks, and collectively more than 550 bees have to travel nearly 55,000 miles and visit two million flowers to gather enough nectar to produce one pound of honey.

At the Zoo, the hive’s honey won’t be harvested for sale because there isn’t enough to go around for everyone. It’s best for a small hive, such as this one, to keep the honey and store it for use as food in the winter months. Once the temperatures drop, the bees in a hive will cluster closer together over the eggs and larvae to help keep them safe and to maintain a core temperature of just over 93 degrees. Since they won’t leave the hive for months, the bees use any honey they have stored in wax combs or cells as food until they can reemerge in spring.

Once the weather warms up again, the bees leave the hive in search of the brightest and most colorful flowers. Sometimes the bees decide to divide and create a new colony, creating a swarm. The queen and half of the bees will leave the hive and eventually land in a cluster on a tree branch, bush or any object they can find to rest on. A few of the bees will then fly out in search of their next home while the queen and her protectors wait. While many people see bees as a nuisance during a swarm, it is best to leave them alone and call for help. 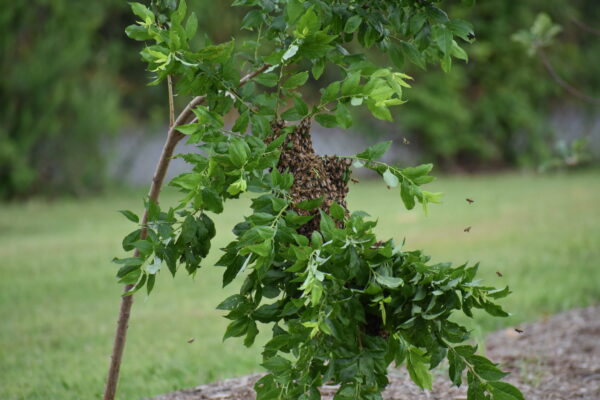 The number one rule for a swarm is to not spray the bees with any chemicals or pesticides. Leave them alone and call your local beekeeper who will come to the swarm location, free of charge, to gather the bees and safely relocate them to a new hive. It is important to save the bee swarm so they can continue pollinating and providing us with food, but it is also important to help all bees in general. A bee only stings if it feels threatened and will die shortly after, so it must feel threatened enough to lose its life.

A typical bee that leaves the hive to pollinate and gather nectar for the day will forage a one, two and three mile radius around the hive. Neighborhoods such as Riverview, Park Place, Colonial Place and the Zoo’s grounds are being foraged by the Zoo’s bees, so we encourage the planting of native flowers and plants for the pollinators and also discourage the use of chemicals and pesticides on your lawn in these areas as well as all neighborhoods. This will help keep the bees healthy and your yard will be beautiful and inviting.

We invite you to come to our hive and learn more about our new friends on your next visit to the Zoo, and be sure to visit the Norfolk Beekeepers website to learn even more fun facts about bees!

« Going to the Baa-Baa Shop Mobservations »