Tales of the TailsHer Majesty, the King

There are more than 3,000 species of snake spread out across every continent except Antarctica, and of those thousands, only a fraction are venomous. Out of more than approximately 600 venomous snake species can stand only one king – and yes, they actually can stand. We’re talking about the world’s largest venomous snake, the King cobra.

King cobras are endemic, or native, to India and Southeast Asia including in Southern China, Hong Kong, the Philippines, western Indonesia and along the Malay Peninsula. They are typically found in dense or open forests, in bamboo thickets, along mangrove swamps and near streams. They can be seen on the ground, but also spend some of their time in trees or bushes.

These snakes are among the longest in the world, growing to be 10 to 12 feet on average, with some individuals growing up to 18 feet in length! King cobras can be black, brown, green or yellow in color and just like all cobras, have the signature “hood”, in which the snake will flatten its neck ribs. The cobra displays its hood as a warning to potential threats, but typically will flee instead of striking. If they feel threatened enough, king cobras can “stand” up to four feet tall and chase after their target.

A king cobra’s fangs are nearly half an inch long and one single bite can kill an elephant or 20 humans! Their venom contains a neurotoxin that affect’s the victim’s nervous system. King cobras aren’t the most venomous snake, but are known as the “king” of cobras because they are the only cobra species to eat other venomous snakes, including other cobra species and even juveniles of their own species.

On average, these fierce-looking snakes can live up to 20 years in the wild, however their species is slowly going extinct. They are listed as vulnerable by the International Union for Conservation of Nature Red List due to habitat destruction, collection for parts and the illegal pet trade, and human persecution due to their potential danger to humans. In Vietnam, the king cobra is now a protected species and the King Cobra Conservancy was established in 2016 to better understand the species to help educate the public and save the species. 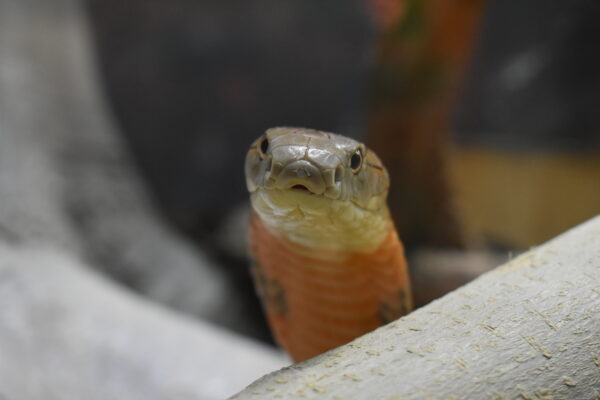 Only one king cobra rules over its exhibit at the very front of the Virginia Zoo’s World of Reptiles. This queen, coined Clarice, is estimated to be around five years old and measures around nine feet long. She arrived at the Zoo on June 14, 2018 and captivated everyone who laid eyes on her almost immediately.

When dealing with one of the most venomous snakes in the world, special precautions must be taken including always having a supply of an antivenom called Neurotoxic Polyvalent, which can be publicly seen in the fridge right next her exhibit in a box labeled “A”. The other three boxes labeled “B”, “C” and “D” are antivenoms, also known as antivenins, for the Zoo’s various vipers, adders and rattlesnakes. The local hospital also stocks antivenom for Virginia-native species, and the supply is checked and verified by Zoo staff every six months.

Keepers almost never handle Clarice, but have a unique method of feeding her and cleaning her exhibit. On the very right of her exhibit is a hole leading to a smaller shift area. Keepers open the door to this area and Clarice will slither into the enclosed box and curl up on a heating pad – remember, snakes use heat to regulate their body temperatures, so Clarice thoroughly enjoys her heating pad! Keepers say Clarice will also often “let you know she is a king cobra and that she demands your respect” if you look at her through the plexiglass in her shift box.

The white hole behind Clarice leads to her secure behind-the-scenes shift box.

Once Clarice is in her shift box, Keepers will clean out her main exhibit and place food inside, which consists of one to two rats every other week. They will then secure the exhibit and give Clarice access. The Keepers will mist her from above while she is on exhibit, and say she frequently drinks from the rain shower.

Clarice is a great ambassador for her species and Keepers say that the Zoo is lucky to have her in its collection. They also mention that she constantly shows staff that king cobras are smarter than other snakes. She certainly keeps them on their toes!