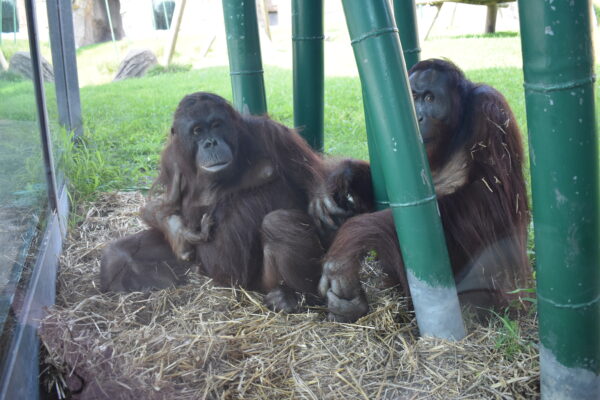 Orangutan Caring Week is celebrated every year during November, and it’s no coincidence that this week of honoring orangutans occurs during a time the Zoo is most thankful for all of its animals. While our five orangutans are always the center of attention when in the presence of their Zoo Keepers, this week of celebrating our reddish-orange friends isn’t all fun and games. The Virginia Zoo is on a serious mission to help these primates from going extinct, and you can help, too.

Orangutan populations in Borneo and Sumatra, islands off of the coast of Indonesia and Malaysia, are drastically depleting and humans are primarily to blame for the demise of the species. More than 80 percent of the orangutans’ habitats have been demolished due to humans clearing palm tree forests to harvest palm oil, an ingredient found in baked goods, candy and even shampoo and candles. Orangutans are also under constant threat from poachers and hunters who see the great apes as pests living in forests that are to be harvested for the palm oil or for making paper.

The rate in which orangutans reproduce also doesn’t help the species’ population rebuild, since they can only have three to four offspring in a lifetime. Orangutans give birth to one infant after a nine month gestation period. That baby will then nurse and cling to mom from two to up to 10 years, and the mother will not reproduce again until the infant becomes fully independent, which makes orangutans one of the slowest reproducers in the animal kingdom. 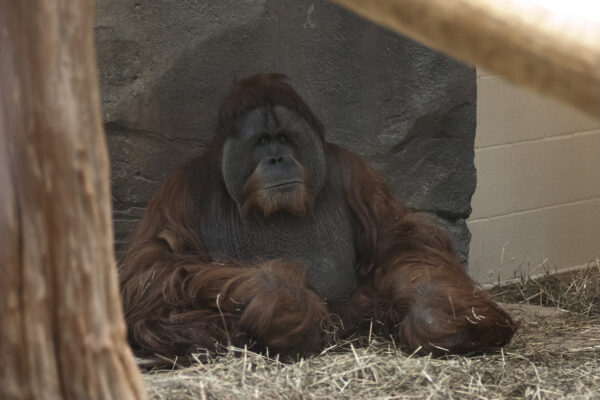 All of these factors combined make it difficult for orangutans to thrive in the wild, which is why multiple conservation programs have been created to help save them from going extinct. The Association for Zoos and Aquariums has a Species Survival Program® for orangutans, which oversees and manages species’ population in zoos by monitoring breeding to prevent overpopulation and inbreeding. The SSP also ensures the species’ survival in the wild through conservation efforts such as programs to combat poaching.

Earlier this year, the Zoo contributed to the world’s orangutan population with the birth of Sofie in June. At almost five months old, Sofie, which is an acronym for Saving Orangutans from Extinction, has been growing up fast. According to her Zoo Keepers, Sofie has been spotted leaving mom, Dara, to experiment with climbing the mesh but is still uncoordinated. Sofie is also starting to reach for objects, is shy around Keeper staff and loves to ride and perch on top of Dara’s head. Sofie also loves interacting with dad, Solaris, who can be seen touching Sofie’s hands and feet.

The Zoo’s mission is to save and protect the world’s wildlife by inspiring a passion for nature and taking conservation action at home and around the world. For this year’s Orangutan Caring Week, organizations across the world are pledging to “Value Orangutans Over Profit to Avoid Extinction” by motivating people to care enough to make an action. We are committed to making an impact on the future of the orangutan species, so we are also encouraging our Zoo fans to make an impact as well!

You can donate to conservation here, but you can also make a non-monetary contribution to saving orangutans by purchasing items without palm oil in them, or items that contain sustainably-harvested palm oil as marked safe by the Roundtable on Sustainable Palm Oil (RSPO). By using these items, you’re taking a stand on protecting the orangutans’s habitats, and therefore, the entire species. You can read more on the palm oil crisis and how to make globally responsible consumer choices here.