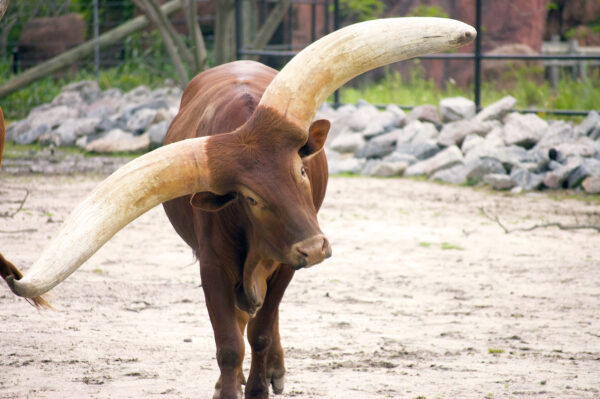 Animal Wellness More about Diallo and his Condition

Many questions surrounding Diallo’s condition have been asked in the past couple of days regarding why certain treatment methods were not performed on our five-year-old watusi cattle with the head tilt. The Zoo’s Veterinarian, Dr. Colleen Clabbers, has summarized the course of action and treatment options that were considered but ultimately not recommended by our veterinary colleagues at other zoological facilities.

How was this problem diagnosed?

Keepers began seeing mucus drain out of Diallo’s sinuses, which led them to monitor this condition. When his head tilt was first noted, he received a thorough exam, including several diagnostic tests to determine the root of his problem. The most valuable diagnostic tool in Diallo’s case were radiographs, which showed a significant buildup of mucous material in the base of his right horn, compared to the left horn. On radiographs, a normal horn should have good contrast between black and white (black being air and white being bone). Diallo’s radiographs showed there was a complete loss of structure in his right horn, compared to his left horn, which tells us that the tissue was very abnormal.

Why didn’t you just remove the horn?

Watusi have a matrix of epithelial tissue in their horn that helps with heat exchange (this is important as animals that are native to Africa). The sheer size of Diallo’s horn would have made this procedure extremely difficult to heal successfully. Also, it would have been necessary to remove both horns because of the weight imbalance, which complicates things even further. The circumference of Diallo’s right horn was more than two feet, making the diameter (the width of his horn) about nine inches. When you remove the horn of cattle, it creates an open space to the animals’ sinuses with no way to close the wound. For Diallo, this would have been a nine-inch open wound that would take many months to heal, if it healed at all. This also opens up the possibility for serious infections and would have been extremely difficult to treat.

After consulting with other veterinarians who have attempted the horn removal before at other facilities, the procedure was not medically recommended because the tissue in the sinuses was already affected and did not result in any improvement. Also, having such a large wound left to heal would result in a very high risk of bacterial infection. Unfortunately, even though this procedure has been performed in other cattle with smaller horns, it was not possible in Diallo and has not been successful in watusi at other facilities.

Was Diallo in a lot of pain?

The mucus accumulation is not thought to cause pain, but does cause a significant weight imbalance. Watusi have incredible neck strength to balance those large horns that sit on top of their head, so they are well adapted to handle the load. Keepers had been closely monitoring Diallo since the head tilt began. Even with his head tilt, they witnessed him interacting normally with his brother, Gamba, maintaining normal eating habits, participating in training sessions and he had no trouble keeping up with the herd. It recently became a welfare concern when Animal Care staff noticed that the bottom of the horn was dragging more and became damaged, which opened up the likely possibility for secondary bleeding and additional infections.

Why couldn’t you suction the mucus out?

The mucus inside the horn is very thick and the complex layout of tissue inside of the horn makes it too difficult to remove. Due to these features, suction would be unsuccessful.

The team here at the Zoo will miss Diallo dearly and we are very thankful to all of you who have inquired about him since his diagnosis and for your continued support. 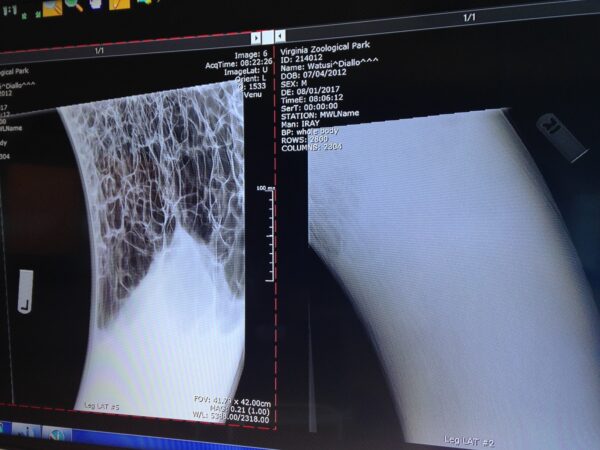 Diallo’s radiographs taken here at the Zoo in July.

RIGHT: The infected horn with significant buildup of mucous material.

Preserved cross section of a Watusi horn, showing the matrix of epithelial tissue.
Photo provided by a consulting institution.

To read our original blog on Diallo’s condition, click HERE.