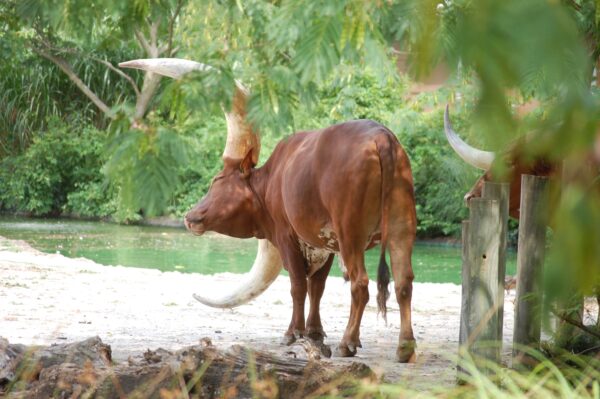 Animal WellnessWhat’s Up with Diallo?

If you’ve been to the Zoo recently, you might have noticed Diallo, one of our two five-year-old Watusi cattle has a slight tilt to his head. Inside all Watusi horns there are special cells that help with heat exchange and air filtration. These cells also produce mucus, and unfortunately in Diallo’s case, there is an overproduction of mucus in one horn, causing a weight difference between the right and left horn. It is unknown what exactly triggers this mucus production. 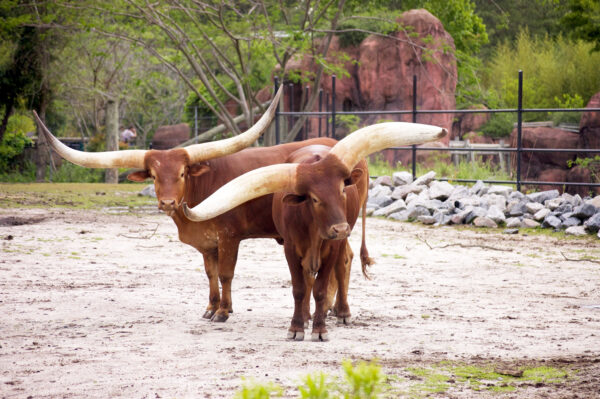 “We have been monitoring Diallo for the past couple of months as this condition has developed,” said Dr. Colleen Clabbers, the Virginia Zoo veterinarian. “His Keepers have been giving him guaifenesin daily, also known as Mucinex®, to help with the mucus,” Clabbers said. She added this is not a painful condition to Diallo, but more of a weight imbalance between the two horns.

Watusi are a medium-sized bovine with females, or cows, generally weighing from 800 to 1,200 pounds and males, or bulls, weighing from 1,000 to 1,600 pounds. They are especially resistant to drought, heat and direct sunlight because their huge horns act as a natural cooling system by circulating blood to the ends of the horn to disperse the heat before returning it to the body.

The Veterinarian and Animal Care Staff have contacted other institutions across the country that have experienced this same issue with their Watusi cattle. Many treatment options have been attempted, including drilling a small hole in the affected horn to drain and/or suction the mucus out. However, these attempts were unsuccessful for a number of reasons. One reason is that the mucus is very, very thick. Also, the inside of the horns where the mucus builds up is made of a matrix of epithelium. It is literally a maze of tissue inside the horns, so there is no straight track through which to remove the mucus. The thickness of the mucus combined with the maze of tissue inside the horn makes it nearly impossible to physically remove it.

An attempt was made to apply weights to the end of the unaffected horn to help counteract the weight from the mucus on the affected horn. However, this attempt was ultimately unsuccessful. “The weights were a bit of a trial and error process.” Dr. Clabbers said. “Watusi occasionally rub their horns on different objects, so keeping the weights in place was a challenge. It’s just a matter of finding what Diallo is comfortable with and what helps him the most.” 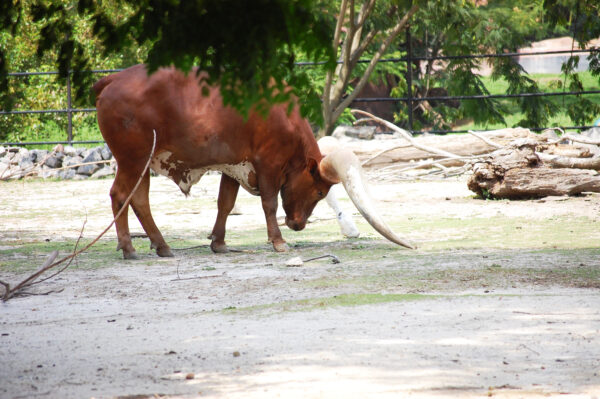 Unfortunately, Diallo removed the weights himself shortly after they were placed. Reapplication has been discussed but Keepers feel he will find a way to get them off. Permanently affixing them could be potentially damaging to his horn. As treatment options are explored, visitors may notice a change in appearance to his horns, but it is not painful and will not interfere with Diallo’s daily activities. Zookeepers are monitoring him closely to make sure he’s comfortable, and they have been observing him eating well and keeping up with his brother, Gamba, on exhibit. Staff will be monitoring his condition and behavior over the next couple of months to ensure he continues to maintain a good quality of life.