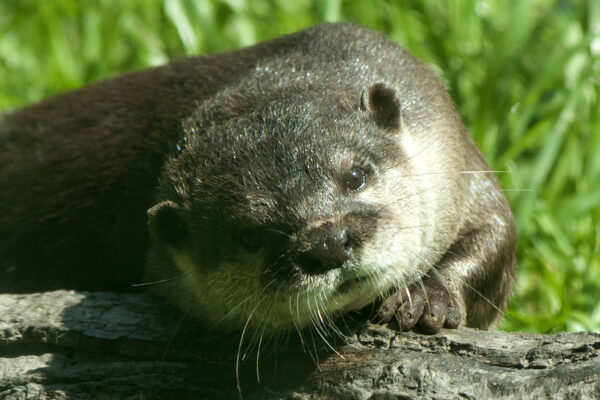 Tales of the TailsOtterly Adorable Animals

Since today is World Otter Day, we thought we “otter” tell you all about our two adorable Asian small-clawed otters and their intriguing species.

Hailing from Southeast Asia, southern China, Indonesia and the Philippines, Asian small-clawed otters are found in coastal mangrove swamps, marshes, freshwater wetlands and rice paddies. These semi-aquatic creatures spend half of their time on land as compared to other species of otter, but these little critters are still just as good of swimmers. In fact, otters’ bodies are designed for trekking through water. 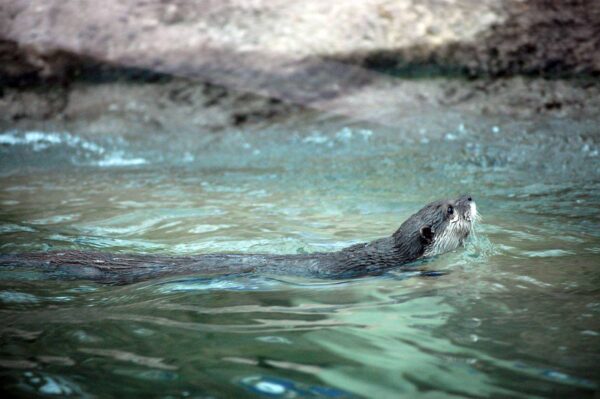 Otters have long, slender bodies with short legs. They have muscular tails and webbed paws that help propel them through water. While swimming under water, otters can close their ears and nostrils, and their water resistant hair makes them better at gliding through water with agility and speed.

Asian small-clawed otters are in fact the smallest species of otter. This species of otter can grow up to almost three feet in length and are half the size of Giant river otters, which can grow up to six feet in length. Otters are Mustelids, a mammal of the weasel family distinguished by having a long body, short legs, and musky scent glands under the tail. Believe it or not, otters are related to weasels, badgers, wolverines and SKUNKS! 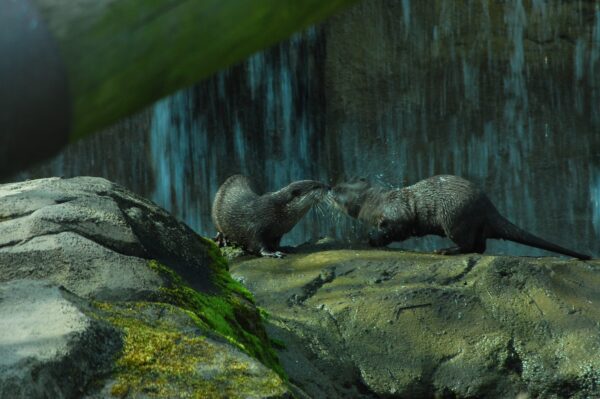 Otters are often found in the illegal pet trade, especially in Asia. The species is also killed because humans, especially farmers and fishermen, see them as pests who steal food and harm rice fields. They are also poached for their meat, soft pelts and body parts, which are used in traditional Asian medicine. These factors, plus others, have contributed to the species’ current conservation status.

Asian small-clawed otters are considered as vulnerable to extinction according to the International Union for Conservation of Nature and Natural Resources (IUCN). Laws have been put in place to prohibit the trade or sale of otter pelts, and otters are now wetlands ambassadors. Both acts are attempting to increase and protect the otter population. 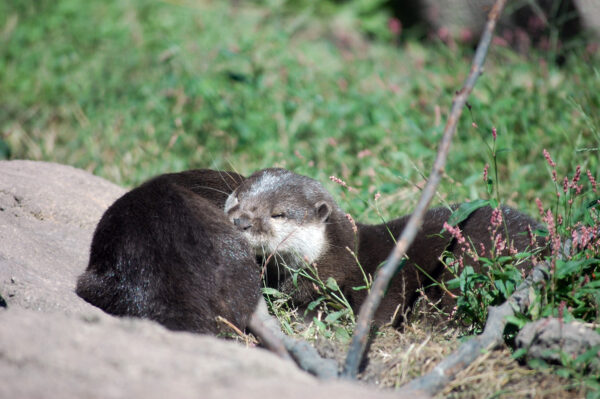 The Virginia Zoo has two otterly cute otters, Merrill and Sawyer. The bonded pair can be seen floating in their pool, napping on warm rocks and foraging for snacks in the grass in their enclosure. Guests will almost always see the two otters side by side, as the couple is inseparable.

Merrill is the female Asian small-clawed otter here at the Zoo. She was born on March 6, 2005 and is 12 years old. Before coming to the Zoo in February 2014, Merrill lived at Zoo Atlanta. Her favorite food is what all otters love to eat: FISH! However, she appears to enjoy shelling clams for enrichment. Merrill’s typical day includes sunbathing and cuddling with her mate in their nest, eating, and floating down the waterfall stream to swim in the pool and rest on the floating platform.

Sawyer, Merrill’s sidekick, is the complete opposite of Merrill. Born on October 24, 2008, this eight-year-old male otter is very active. Sawyer came from the Bronx Zoo in June of 2010. He enjoys fish for food, just like Merrill, but prefers playing with rocks and pebbles, sunbathing, marking his scent and making elaborate nests with straw, grass and bamboo. If you ever hear and otter talking, chances are it’s Sawyer doing the chatting! He is very vocal, communicates with Keepers when he has a suspicion of food nearby, and will often make a lot of happy noises, such as squeals, when he’s eating!

So how do Keepers tell the pair apart? Both weigh around eight to eight-and-a-half pounds, so they are roughly the same size. The otters move pretty fast, but if you pay close attention, you’ll notice one otter has a longer, more slender face. This is Merrill! Sawyer has more of a “snout” on his face. 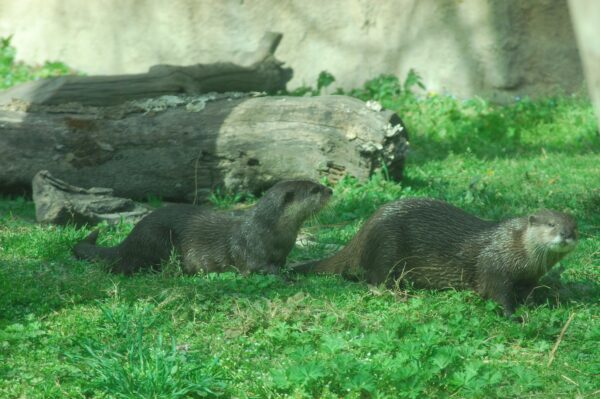 Merrill and Sawyer can be found in their exhibit in Asia – Trail of the Tiger. The White-cheeked gibbons are also found in the same enclosure, and the lesser apes can often be found playing tag with the otters for fun! Be sure to check them all out and Happy World Otter Day!

P.S. The otters are available for Zoodoption! You can help provide their care for one year! Packages start at $25 and can include adoption certificates, a photo of the otter and your very own cute otter stuffed animal!