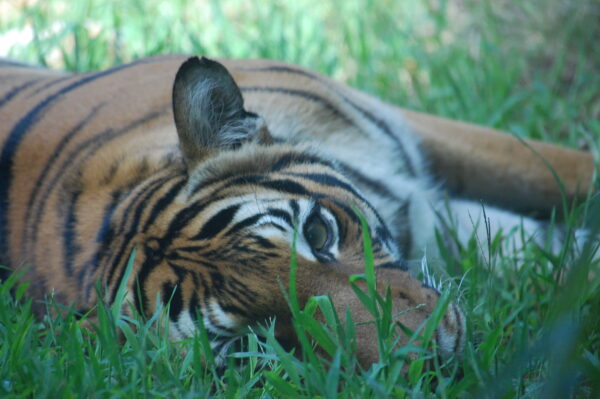 This day of observance encourages the conservation and protection of various species of animals that are susceptible to extinction in the near future. The Virginia Zoo partners with several conservation programs and participates in the Species Survival Plan (SSP), both of which help keep many species of animals from going extinct.

Several of the Zoo’s residents are endangered, or at risk for extinction. Christopher and cubs Stubbley and Osceola, the Zoo’s Malayan tigers, are one of the species that World Wildlife Conservation Day encourages the protection of. There are less than 450 of these tigers left in the wild due to poaching, illegal pet trading and habitat loss.

The World Wildlife Fund (WWF) has several efforts currently in place to help save not only the Malayan tigers, but all species of tigers. The WWF has designated several forests as “conservation forests,” or areas that cannot be touched or destroyed by man. These forests are homes to thousands of tigers and protect against habitat loss. To safeguard from poaching and the illegal capture and sale of tigers as pets, hidden cameras are placed along the forests which help alert authorities when man comes in contact with a tiger. The WWF also has education programs for people, such as farmers, that use easy-to-read comic books and webpages to help alleviate human-tiger conflict.

Rhinos are mostly poached and killed for the sale of their horns on the black market. Supposedly rhino horns, which are made of keratin (also found in human hair and nails), are believed to have medicinal value in several countries, although there is no scientific proof the horns can cure illnesses. Habitat fragmentation, another issue rhinos face, is a major cause of the decline in their population. Harsh landscapes and loss of habitats prevent rhinos from being able to come together and breed. With this increase in rhino deaths and the decrease in births, it is possible some species of rhinos will become extinct in our lifetime.

Virginia Zoo cheetah brothers Chester and Rico are also threatened by extinction. Only about 10,000 cheetahs are left in the wild today. The number of cheetahs has dropped so drastically that December 4 has also become a day to preserve the species, known as National Cheetah Day. The Cheetah Conservation Fund (CCF) uses holistic approaches to help save the cheetahs in the wild. Check out our blog from November that discusses what the Zoo learned from the CCF about the cheetahs’ current status in the wild and what is being done to save them.

Many people depend on animals, plants and other wildlife to survive and live on, including for food, shelter, clothing, medicine and other uses. Some types of wildlife even help contribute to local economies, especially through tourism, which can be instrumental to conservation. However, over-exploitation of wildlife exists and continues to be a major issue for the many species of animals at risk of extinction. It is essential that everyone helps to protect all wildlife.

Tigers, rhinos and cheetahs are only just a few of the more than 40,000 different species of endangered or threatened with extinction. The protection and conservation of these beautiful creatures starts with you! You can learn more about conservation here, and we encourage you to donate to the Virginia Zoo and its many conservation efforts here!