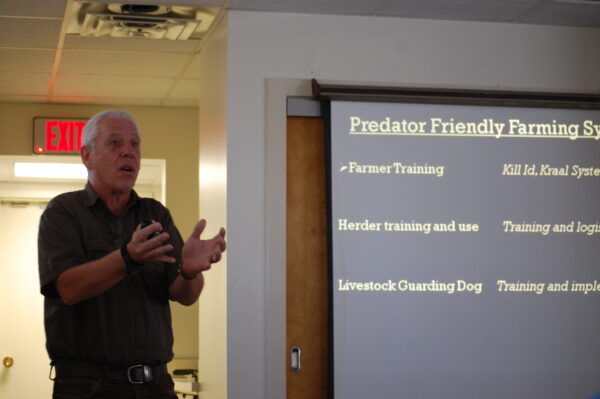 The cheetah (Acinonyx jubatus) is a wild cat that is found in parts of eastern and southwestern Africa, as well as parts of Iran. These unique cats are distinguished by their slender tan bodies, which are cloaked in black spots from head to tail. Cheetahs are known as the world’s fastest land animal, and can reach speeds of up to 68 miles per hour.

Despite its speed, the cheetah has become Africa’s most endangered cat and is vulnerable to extinction. Almost two decades ago, there were over 100,000 cheetahs. Today, only about 10,000 cheetahs still exist.

Brian Badger, the director of conservation and outreach with the Cheetah Conservation Fund (CCF) recently visited the Virginia Zoo to educate Zoo keepers and staff about the CCF’s current efforts that are in place to help save the cheetahs. The CCF was founded in Namibia in 1990 and is the global leader in research and conservation of cheetahs. 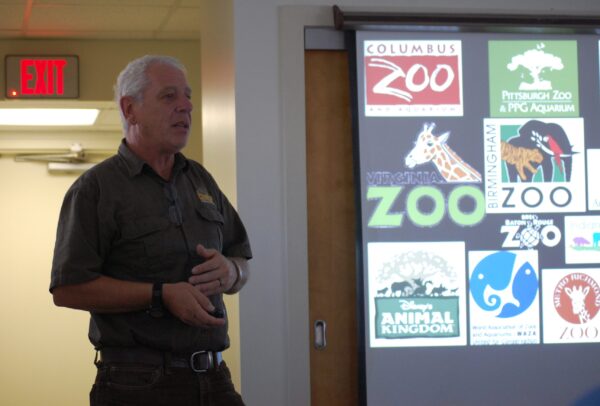 Badger’s presentation shed light on several reasons as to why the number of cheetahs is declining, as well as solutions to the issues at hand. Poaching is not a major issue, but does occur. Baby cheetahs are often captured and illegally sold into captivity, while the mother is killed. The CCF is active in preventing the illegal pet trade of wildlife, especially the cheetahs.

Disturbances in the balance of nature has an impact on the population of cheetahs and wildlife in general. Too little rain can affect how dry the land is, and as a result, fires can break out more easily and wipe out everything that is living.

Habitat loss is also another issue cheetahs face. Native Encroaching thornbush is overtaking much of the cheetahs’ natural habitat. The dense bush grows rapidly and is extremely thorny, which makes it impossible for cheetahs and their food sources to thrive in. In 2001, the CCF began its mission to restore the cheetahs’ habitat by processing the encroaching bush into high-heat, low-emission, compacted logs for use as a cooking fuel or for home heating. The sustainable practice not only positively affects the cheetahs, but the environment, the economy and the people.

The biggest issue for cheetahs is that the land they live on is also inhabited by farms and livestock. Cheetahs are natural predators, and it is common for them to prey on livestock, such as goats. As a result, human contact from farmers harms the cheetahs. Farmers often set traps on their land in which the cheetahs are caught and killed.

The CCF engages with farmers to establish relationships and a point of contact to communicate with in case of human-wildlife conflicts. Farmers often have a lack of education about their impacts on the cheetahs, so the CCF offers classes and safe solutions on dealing with cheetahs.

Farmers are trained in predator-friendly farmer systems, including capturing the cheetahs and turning them over to the CCF to release at a safe distance away from the farm. Farmers also participate in the Livestock Guarding Dog Program. The CCF breeds Anatolian shepherd and Kangal dogs, known for herding livestock, and places them with farmers to guard their livestock and scare off any potential predators. This program is proven to be effective and reduces livestock loss from all predators by over 80 percent and up to 100 percent.

The CCF uses these holistic approaches to help save the cheetahs in the wild. For more information on cheetahs or the CCF, visit http://www.cheetah.org/.

December 4, 2016 is National Cheetah Day, a day that honors the cheetah for its iconic status as the fastest mammal on Earth and calls attention to its plight as the most endangered of all African big cats.