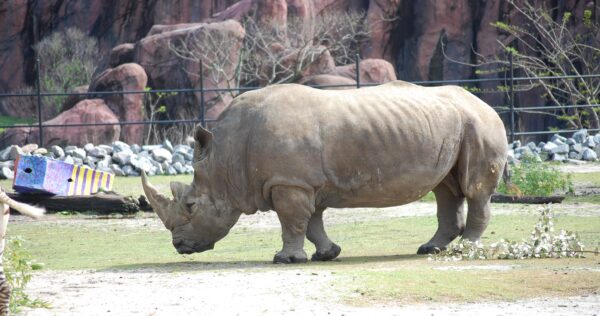 Meet AlfredGet to know our rhino!

While in the Africa section of the zoo, you may be fortunate enough to get a glimpse of Alfred, our White rhinoceros lumbering around the yard. The continent of Africa has two species of rhinos, the black rhino and the white rhino. The Black rhino is a smaller species, weighing in at about 3000 pounds and consuming primarily browse (leaves and branches from trees). They are easily identified by their pointed lip used to pull leaves and branches towards their mouths. The white rhino is quite a bit larger, weighing in at about 5000 pounds and eating an almost exclusive diet of grass. Their lips are wide and flat so they can pull grasses up from the ground in bulk.

Alfred was born in 1968 and at the age of 47 years, Alfred is one of the oldest White rhinos in captivity. He spent the first part of his life at Kings Dominion, then moved to The Wilds in Ohio.  He came to Virginia Zoo in the late 1990’s and has been here for over two decades. He currently shares a yard with our Hartmann’s Mountain Zebra and Watusi cattle.  He is not always easy to see.  He usually comes out first thing in the morning and explores the yard for a bit.  Then he usually will move to the back left corner of the exhibit (closest to the giraffe exhibit) for his midday snooze. A lot of times, you can just see his enormous grey hump (which is mostly muscle) in the distance next to the moat.  Around 3PM, he’ll usually get up and start to make his way back across the yard towards the gate. 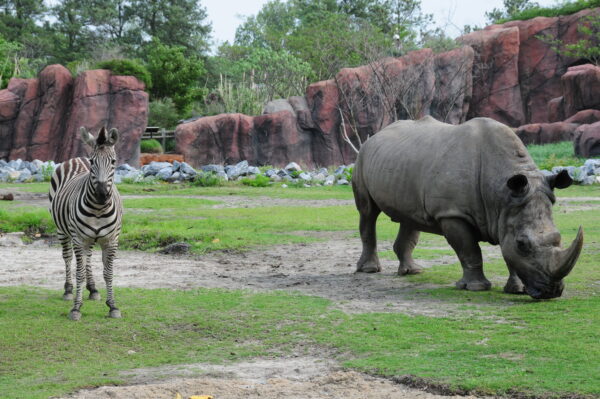 When Alfred was born in the late 60’s, there were over 70,000 African rhinos in existence.  Today, there are possibly fewer than 25,000 African rhinos remaining.  In fact, some scientists are predicting that we may see all rhino species become extinct within the next 20 years.

Why the drastic drop in population?  In some regions of the world, rhino horn is highly valued for its perceived medical properties.  In Chinese medicine, rhino horn has been touted to cure arthritis, headaches, and even cancer.  These claims are incorrect, as rhino horn is actually made up of a substance called keratin; the same material that makes up your hair and fingernails.  For example, in 2007, less than 40 rhinos were poached.  However, over the past 5 years, the number has risen almost 300% to well over a thousand rhinos poached each year.

“But what can I do?” – The Virginia Zoo’s Conservation Fund contributes approximately $5000.00 a year to the International Rhino Foundation.  So, by visiting the zoo, and Alfred, you actually do help fund some of the rhino conservation efforts in Africa.  IRF supports the rangers on the ground fighting poachers, helps to track rhino populations, and campaigns to make poaching laws and punishment more effective.  To learn more about the International Rhino Foundation and their efforts, visit www.rhinos.org .  IRF also has a Facebook page you can follow that keeps you up to date on the latest news in the fight to save the world’s rhinos.  The American Association of Zookeepers also hosts a yearly fundraiser, called Bowling For Rhinos, that raises money for rhino conservation. For more information on Bowling for Rhinos, go to www.aazk.org/bowling-for-rhinos/.