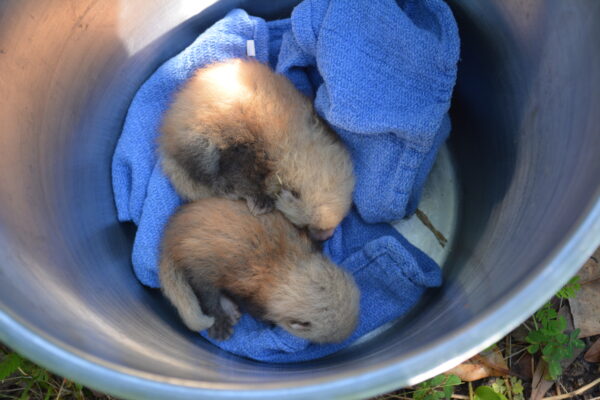 It's a Boy! And a Girl!Red Panda Cubs

There are two new residents in the Zoo’s Asia – Trail of the Tiger exhibit – baby red pandas. This is the third set of twins born at the Zoo in the last three years.

Born Thursday, June 25, the cubs are the first mixed-gender set for mom Bernadette. The female tips the scales at 85 grams and the male weighs in at 78 grams. Zoo veterinarian Dr. Amanda Guthrie says that the cubs are in good health and appear to be thriving under the watchful care of mom Bernadette.

“These are very significant births for the species,” states Dr. Guthrie. “Bernadette is a great, experienced mother so we are confident these cubs will do well. They look healthy at this time and we’ll continue to monitor their progress closely.”

The cubs will stay in the nest for more than 90 days, but lucky visitors might see mom Bernadette occasionally carrying a cub in her mouth throughout the exhibit from one nest site to another – a panda’s way of diverting attention away from the cub’s scent, and nest site, from potential predators. The Zoo’s Panda Cam also offers the public a chance to see the cubs inside the nest.

Red pandas are tree-dwelling animals native to the eastern Himalayas and southwestern China. They were the first panda discovered, about 40 years prior to giant pandas, although very different both species share the name. Slightly larger than a domestic cat and with markings similar to a raccoon, red pandas have soft, dense reddish-brown and white fur. They feed mainly on bamboo, but also various plant shoots, leaves, fruit and insects. Red pandas are shy and solitary except when mating. Females give birth in the spring and summer, typically to one to three young.