Tales of the TailsThe National Mammal

If you think of the largest mammal in the United States, what would come to mind first, a moose? A bear? What about a bison? 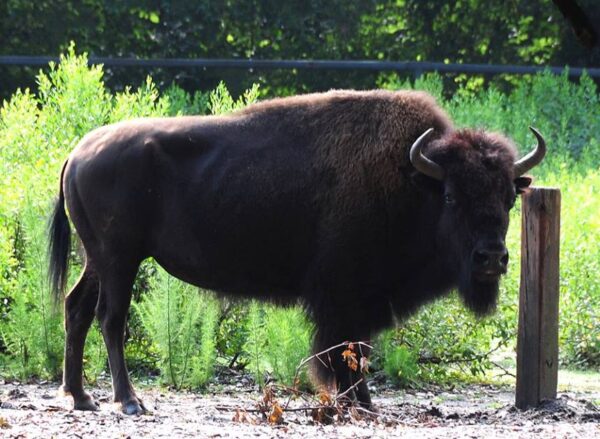 Bison are the largest mammals in North America (and now the official National Mammal!) but can still run pretty fast; up to 35 miles per hour to be exact! They can weigh up to one ton, and are constantly munching on food. Bison are actually ruminants, just like cows, giraffes and bongo, which means they barely chew their food, swallow it, then regurgitate it hours later to chew on as “cud”.

A bison’s diet usually consists of grasses, shrubs, and leaves, but the bison at the Zoo get served herbivore grain, Timothy hay, a variety of other browse that our Horticulture Department provides for them and a small amount of mixed produce like sweet potato, carrot and apple.

Today, more than 500,000 bison can be found all across the US. There are two pure wild species of bison: wood bison (Bison bison athabascae) and plains bison (Bison bison bison). Around 30,000 of the total population consists of pure wild bison that roam free around the Midwest. Other types of bison are cross-breeds of the wood and plains bison. It is estimated that a bison’s life expectancy is between 12 and 20 years, or even longer with individuals under human care.

The Zoo has two female bison, Oakley and Lily, who have been Virginia Zoo residents since November of 2000.

Lily was born on June 5, 1998 at Lehigh Valley Zoo in Pennsylvania. She can be identified by her lack of horn sheaths, which are the keratin covers over her horns. They likely came off as she was rubbing her head on branches or logs, and Keepers found them laying in the bison yard and now use them for educational purposes. Lily spends her time enjoying mulberry browse and knocking around barrels with her head. Keepers say Lily is sassy and often puts her head between the exhibit bars at unsuspecting Keepers. She also enjoys running laps around her exhibit when the weather is cold and snowy. As the weather gets colder, the lovely ladies will grow a thicker coat of fur, which will shed in the spring time. There are street sweeper brushes that hang on their fence to help them shed during that time.

Oakley, the bigger bison of the two, has both of her horn sheaths. Due to her age, her horns have also turned downward. She was born on May 24, 1998 at the Lehigh Valley Zoo. Although she is shy around Keepers and slower than Lily, she is typically the dominant one in the pair. Oakley likes to spend her time resting, but enjoys enrichment such as pumpkins and watermelons that she can smash or roll around.

Oakley and Lily’s yard can be found in between the ZooFarm and the Bald Eagle enclosure. Be sure to stop by and pay tribute to our National Mammal!