World Lion DaySaving the Kings and Queens of the Jungle

Of all the cat species in the world, lions probably best embody the idea of “teamwork makes the dream work!” Most felines are solitary, often territorial animals who are experts at hunting and surviving on their own. But, as most people know, lions live in family groups known as prides.

Prides of lions generally consist of anywhere from two to 40 lions. Up to three or four males (usually brothers, if more than one) defend the pride and its territory from rival males and other predators such as leopards and hyenas, which may be a threat to any cubs. The majority of the group, however, is made up of females. All the adult females in a pride are related – mothers, daughters, sisters, aunts and cousins – and are the primary hunters for the group. 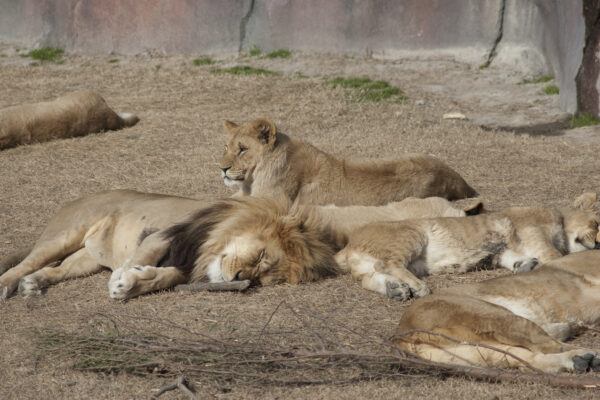 Mramba, his former mate Zola and their four cubs lounging in the sun in 2011.

Many of the common prey animals for lions, such as antelope, wildebeest and zebra, are much larger or faster than any individual lion. By working together, the female lions can strategize and overwhelm prey and are more successful than they would be on their own.

In that same spirit, the Pride Lion Conservation Alliance was formed by women who are leaders in the field of African carnivore conservation.

Launched at the Houston Zoo in 2015, the alliance is made up of five leading lion conservation organizations working on the ground in Africa: Ewaso Lions, Lion Guardians, Niassa Carnivore Project, Lion Landscapes, and Ruaha Carnivore Project. The Pride Alliance collaborates by eliminating competition, sharing information, and distributing funds in a way that is sustainable for long-term projects. Between these five organizations, they work in Kenya, Tanzania, Mozambique and Zambia to research and protect 20% of Africa’s existing wild lion population.

Lion populations have declined by nearly 90% in the last 50 years. The main threat is human-wildlife conflict, which can include everything from habitat loss and prey depletion to persecution hunting to accidental snaring and poisoning. As in all areas where humans and animals live together, work must be done to find a balance in sharing space and resources.

As one half of “human-wildlife conflict” is the needs of humans, the Alliance focuses on providing opportunities and education to locals. They employ hundreds of local people and engage thousands of community members. They provide many services and trainings such as:

To learn more about the Pride Lion Conservation Alliance, visit their website.

If you can, please consider donating to their cause! The Virginia Zoo’s Conservation Fund, which has supported the Alliance in the past, continues to support conservation programs locally and around the world. If you’d like to give to the lions a little closer to home, our males Mramba and Emery, consider making a donation to the Emergency Operating Fund, which helps the Virginia Zoo recoup some of its losses due to the COVID-19 pandemic. We couldn’t do it without you! Teamwork makes the dream work!