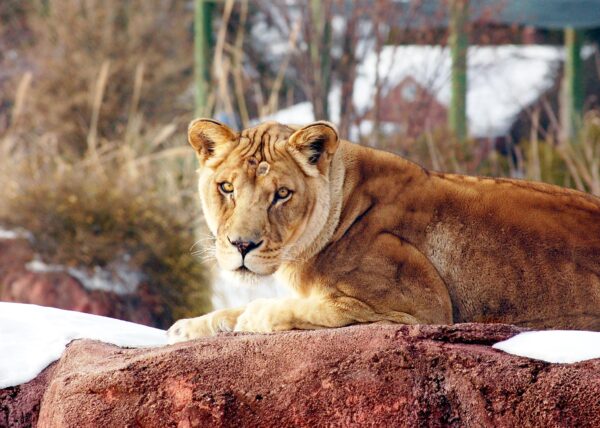 On the BlogZoo Saddened by Loss of Lioness

The Zoo is deeply saddened to announce the loss of our matriarch lioness, Zola. An older lion, at almost 16 years old, Zola was a longtime beloved member of our Zoo family.

A little over three weeks ago, Zola’s appetite started to decrease and Zoo Keepers noticed that she wasn’t really acting like her normal self. A subsequent veterinary exam revealed a problem in her liver. Medical treatment was immediately initiated with fluids, antibiotics, pain medications and gastroprotectants. Keepers worked with Zola daily to encourage her appetite with some of her favorite foods, in addition to her regular diet. Unfortunately, her disease ended up progressing further and both her liver and kidneys began to fail despite all efforts from Keeper and Veterinary staff. As hard as the animal care team tried to help her feel better, her attitude and appetite never rebounded and the difficult decision was made for humane euthanasia. Post-mortem examination from necropsy suggests a cancer in her liver, but final results are pending.

Keepers report that our two male lions, Mramba and son Emery, are doing well as they adjust to this significant change in social dynamics. Since being paired at the Zoo in 2005, Zola and Mramba have produced seven cubs split between three different litters. Zola’s legacy and bloodline lives on in 2 ½ year-old Emery, as well as in several offspring from previous years that have since gone on to other zoological facilities to form prides of their own.

Zola will be dearly missed by all of the Animal Care Staff who had the incredible opportunity of working with her, as well as by our entire family of Zoo staff, volunteers, members and visitors. She inspired so many to care about lions and their conservation needs, and to take action to help protect vulnerable lion populations in their native range. Zola was a magnificent lioness and will be remembered by us all.