Tales of the TailsCheck Out These Rad Tortoises

One of the most easily recognized types of animals in the world is a turtle or tortoise. These reptiles are easy to identify by almost anyone thanks to one physical feature – the shell. Before we fully break out of the shell and introduce you to our rad friends, let’s slowly learn a little more about what classifies a tortoise versus a turtle.

All tortoises are turtles, however not all turtles are tortoises – but what does this mean? Turtles have various types of feet and typically live in areas with water – marshes, ponds, bogs, oceans. Tortoises have  “elephantine” feet and are specifically land-dwelling, but they are still fond of water and often take dips in shallow pools or mud bogs, which helps regulate their body temperature.

Other than the shape of their feet, the anatomy of both turtles and tortoises is similar. They have four legs, a tail, a head and their shell is made of two parts; the top is called a carapace and the bottom is called a plastron, with their shells made of bony plates called scutes.

It is estimated that there are more than 350 species of turtles and tortoises, which include the world’s second largest, the Aldabra tortoise – which weighs more than 500 pounds, and the smallest species in the United States, the bog turtle – which weighs less than five ounces, both of which can be found at the Zoo. While both of these species are cool, there is one species that is pretty rad, and their species has been in the news recently. 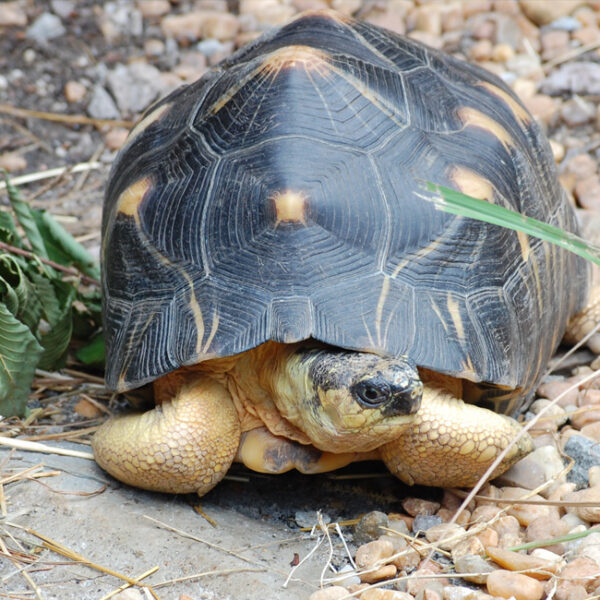 Radiated tortoises are native to one of the most diverse places on earth, Madagascar, and are found nowhere else in the world, at least not legally, but we’ll get to that in a bit. These yellow tortoises are identified by their tall, domed carapace and unique yellow star pattern that appears to “radiate” from the center of each scute on their dark shell.

Radiated tortoises can grow up to 16 inches long and weigh 35 pounds. They are herbivores, mostly grazing on grasses, flowers and fruits. These tortoises, like all turtle and tortoise species, are attracted to brightly-colored plants and reds, oranges and yellows seem to be the most appetizing to them.

These reptiles can live for 40 to 50 years, however many never reach the end of their lifespan. Radiated tortoises are considered to be critically endangered by the International Union for Conservation of Nature (IUCN) because they are collected from their habitats by humans for consumption and sale in the illegal pet trade, and their habitats are being destroyed by deforestation. In 2018, more than 17,000 radiated tortoises were seized from wildlife traffickers, including a bust where nearly 10,000 individuals were found inside a vacant house without food, water or adequate space for an unknown amount of time.

Organizations such as the Turtle Survival Alliance have stepped up in the fight to save this species among others. The Virginia Zoo is fortunate to work with the TSA and has also donated to their cause. The Zoo also participates in the Species Survival Plan® and has a breeding pair of radiated tortoises that will help contribute to the survival of the species.

In the hills of our Africa – Okavango Delta just across from the Meller’s chameleon and White-throated monitor, during the warmer months you can find our pair of radiated tortoises, Sokatra and Malia, out and about exploring their exhibit.

Sokatra was hatched on July 10, 2003 at the Gladys Porter Zoo in Texas. In 2016, he was transferred to the Virginia Zoo. Keepers say Sokatra is fond of fruit, rain or misting, and doing what a tortoise does best – bulldozing his exhibit by eating vegetation and roaming around.

Malia is the Zoo’s female radiated tortoise, who hatched on April 24, 1994 at the same zoo as Sokatra! Keepers say she enjoys magnolia tree leaves as enrichment and can often be seen munching on them or hiding among the browse and other types of leaf litter.

The pair are inseparable and are always intrigued when Keepers come into their exhibit. Keepers say the two typically approach them to see if staff brought any treats. Keepers also enjoy searching the exhibit for potential nests. They have found eggs before, and although none have hatched, are still optimistic for babies in the future!

What do you think of these reptiles? We hope you think they’re just as rad as we do!