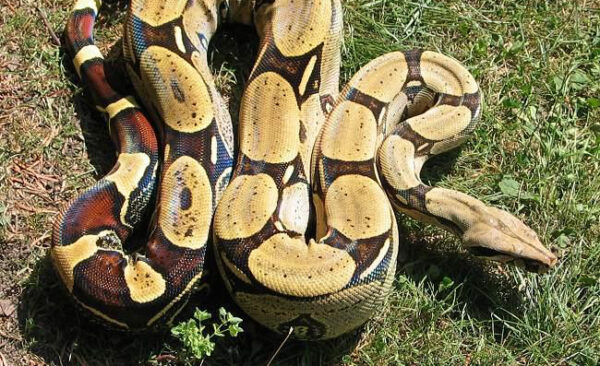 On the BlogResponsible Exotic Pet Ownership

Pets. They come in all different shapes, sizes, colors and species. The most popular pets in the United States include cats and dogs (we saw that one coming), fish, birds, rabbits, guinea pigs, hamsters, ferrets, horses and some reptiles. While many of us find our domesticated pets via shelters and breeders, there is a growing interest in exotic pet ownership.

Eclectus parrots like Zeke are one of several parrot species found as pets. Zeke is only 15, but individuals in his species can live to be 40 years old.

An exotic pet can be described as a non-domesticated animal that is considered to be a wild animal. Many people may simply look at an animal’s cute or unique demeanor and want to have it as a pet without realizing the animal could require highly specialized and costly care, have complex social needs, and could be potentially extremely dangerous. Additionally, most states require that owners apply for a permit from their state wildlife agency in order to keep certain exotic animals as personal pets; there may also be local rules and ordinances for what types of animals you can keep on your property. It is always recommended that you check with your state and city laws and regulations first. Even some domesticated animals, such as chickens, goats or pigs, may have regulations regarding ownership in your area. When considering adopting or purchasing an exotic pet, research is key to ensure your pet is not part of the illegal wildlife trade, did not come from the wild and is not contributing to a species’ population decline in their native habitat.

It is important to note that these types of animals may have substantially more specialized needs than a dog or cat. For example, many primate species such as monkeys or lemurs live and thrive in social groups. This means that they may rely on other individuals within the same species for socialization, food, grooming, communication, raising the young and even protection against predators. When a normally social animal is kept secluded from other members of their species, this can cause the animal to suffer and experience poor welfare, even leading them to potentially become aggressive.

Bolivian gray titi monkeys Paris and Ziggy, who are cousins, are a social companion pair under the Species Survival Plan®.

Turtle and tortoise species require specialized diets and larger species may require a large enclosure they can’t outgrow, dig or climb out of. Some reptiles like turtles, and bird species like macaws and parrots, can outlive many humans, which must be considered to ensure the animal will be care for its entire life.

Thanks to the popularity of a recent documentary, you may be thinking that having an adorable tiger cub as a pet may seem like an easy task, until you realize they grow into big cats that can weigh more than 600 pounds and have the ability to kill prey, including a human, with one bite. All tiger species populations are in major decline, with the pet trade as one of many reasons big cats are facing extinction. Having a tiger as a pet isn’t the same as having a domesticated cat. Caring for a tiger is extremely complex; these animals require up to 20 pounds of meat per day, need large, strong habitats/enclosures, call for regularly scheduled enrichment to keep them mentally and physically stimulated, and are susceptible to some of the same diseases as cats and dogs. Many small animal veterinarians would likely not be experienced in providing care for exotic pets, or are unable to take them on as patients. Identify, in advance, a veterinarian in your area who specializes in exotics to provide care for any potential exotic pets before you acquire one.

Malayan tiger cubs Stubbley and Osceola were born at the Virginia Zoo in 2016 thanks to the Species Survival Plan®. It is estimated there are less than 300 of these tigers left in the wild.

The Virginia Zoo receives many requests regularly from exotic pet owners asking if we can take their animal when they can no longer or simply don’t want to care for them. Unfortunately, the Zoo doesn’t have unlimited space to take on the high volume of these kinds of requests. There are other options to re-home an exotic pet, such as working with a local shelter, exotic pet rescue group, or wildlife rehabilitation center to find a suitable home, but the best way to ensure an animal receives adequate care is to know your ability to provide the best life-long care prior to adopting an exotic pet.

If you are unable to care for an exotic pet, or even a pet like a cat or dog, do not ever release the animal out on its own. Animals under human care often cannot survive on their own because they may lack the skills to hunt or find food, seek shelter, or avoid dangers such as predators or busy roadways. Always try to re-home the pet or reconsider giving the pet away. Additionally, releasing exotic pets into the wild is illegal in most states and can threaten native wildlife populations.

Reticulated pythons have been spotted as an invasive species in Florida. This species can grow up to 20 feet long and is native to Asia, but was once legal to have as a pet in the United States until 2015.

When in human care, exotic animals, especially those whose species are facing extinction, are best cared for by highly trained animal professionals, including the dedicated animal care staff in good, accredited zoological facilities. The reason zoos exist, including the Virginia Zoo, is to help vulnerable, threatened and endangered species populations thrive. The Zoo participates in more than 80 Species Survival Programs dedicated to ensuring the long-term sustainability of populations in AZA-accredited zoological facilities, helping rebuild populations in the wild, and to protecting species’ native habitats.

Thank you for carefully considering all of the factors that go into caring for an animal before acquiring an exotic (or any) pet! By doing your research and being a responsible pet owner, you are helping to ensure the best possible welfare of your pet, whether domestic or exotic.