What do internet sensation Doug the Pug and an African bullfrog at the Virginia Zoo have in common? Read on to find out!

There are more than 3,000 known frog species in the world, with more discovered every day. Some are so tiny or well-camouflaged that the naked eye may never spot them. Others are so big, they’re hard to miss. The African bullfrog is one of those species.

Although they aren’t the largest in the world – the goliath frog holds that title – African bullfrogs are the largest in South Africa. Just how big are they in comparison to their massive cousins? Goliath frogs’ bodies can grow to 12.5 inches and weigh over seven pounds, while African bullfrogs’ bodies can grow to nine inches and weigh up to three pounds. These numbers are specific to the males of both species; females are typically much smaller. 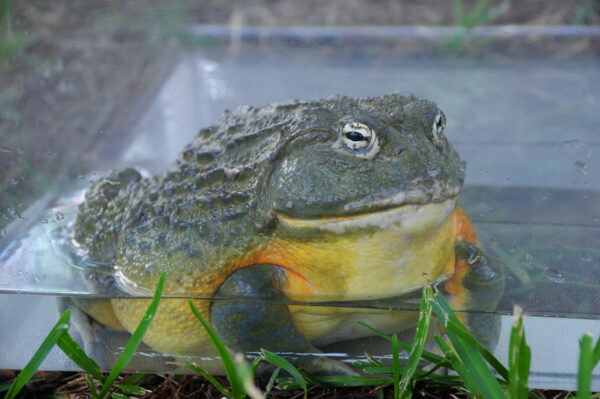 African bullfrogs are native to South African countries such as Malawi, Zambia, Nigeria, Somalia, Mozambique, Angola, Kenya, Rhodesia, Tanzania and Sudan. The bullfrogs are adaptable to many types of climates, even harsh ones. When areas of their range are dry (sometimes for years), or temperatures are too hot or cold, the frogs burrow deep into the ground and wait for the rainy season to begin before emerging.

Lucky for these big frogs, many sources of food can be found both underground and above ground. African bullfrogs are considered carnivores and can eat anything that fits into their mouth from invertebrates to other species of frogs, reptiles, small mammals and even small birds. These frogs can also find themselves as prey to other animals including larger birds and humans, who commonly hunt the species for consumption.

The species is listed as a least concern by the International Union for the Conservation of Nature, however the species’ population is declining due to several factors including hunting and for sale in the international pet trade. These frogs make popular pets, but require specialized care.

So with a little knowledge on the species, you’re probably still wondering – what do a dog and a frog have in common?

African bullfrogs are commonly known as pixie frogs due to their scientific name, Pyxicephalus adspersus, however as you can tell, these frogs aren’t as small as the name “pixie” may imply. Through a rare and special arrangement, Doug the Pug’s owner actually donated Prince Charming the African bullfrog, who had grown bigger than she expected, to the Virginia Zoo’s ambassador program more than ten years ago!

(Note: The Zoo’s acquiring of Prince Charming was a rare occurence. The Zoo is unable to accept donations of animals who need re-homing as we are working to conserve endangered species through management plans for our collections and for individual species.)

Prince Charming came to the Zoo in 2007 and lived behind-the-scenes as he began conditioning to become an animal ambassador. He was presented during educational programs before officially retiring from animal ambassador programs and moved on exhibit to a “bachelor pad” in the World of Reptiles in 2018.

Prince Charming spends his days burrowing in the fresh substrate in his exhibit and eating his favorite foods: roaches, crickets, nightcrawlers and mice. Keepers have noticed that when they spray Prince Charming’s exhibit down with water, he will try to grab the water with his tongue and attempt to eat it.

While Prince Charming is viewable on exhibit, the Zoo has also acquired two young African bullfrogs that live-behind-the-scenes. The pair will eventually make their way onto exhibit in the World of Reptiles.