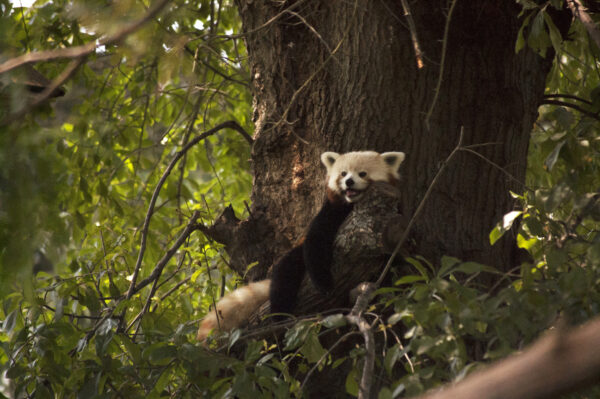 For the past four years, hundreds of images have been submitted by amateur and professional Zoo Fan photographers for consideration in the Zoo’s annual calendar. As staff rummage through every photo, a pattern has emerged with many spectacular images of the same animals appearing by the multitudes. Which animal or species prevails as the most photographed at the Virginia Zoo? They’re fluffy, adorable and red – the Red pandas!

Red pandas are house cat-sized mammals that live in Asian countries such as Nepal, Myanmar, China and India. They earned their name from the reddish color of their bushy fur, although they do have black fur on their legs and white markings on their face, as well as rings on their tail. In their native bamboo forest habitats, it’s fairly easy for these excellent tree-climbers to find food. Between 85 and 95 percent of a panda’s diet consists of bamboo, while the other five to 15 percent is comprised of fruits, insects and the occasional invertebrate or small mammal.

While red pandas and giant pandas share a similar name, habitat and eating habits, the two species are completely different. Giant pandas are more closely related to bears while red pandas are in their own taxonomic family and considered to be a close relative of the raccoon. Another interesting fact about these two types of animals is that red pandas were actually discovered approximately 50 years prior to the giant panda.

Red pandas can live to be between 12 and 14 years old. They reach sexual maturity when they are around 18 months old and breed in the cooler months from January to March. The females give birth to one to four cubs in their self-created nest after at least a three-month gestation period. The young are fully developed and independent after one year.

Like many other arboreal animals, red pandas are at risk for extinction due to deforestation caused by commercial logging. The species is listed as endangered on the International Union for Conservation of Nature’s Red List. The IUCN notes that red pandas are also threatened due to poaching for their pelts and for sale in the international illegal pet trade. As a result of the rapid decline of their species and to help ensure a future stable population, red pandas are now a protected species in many of their native countries.

The Virginia Zoo contributes directly to the conservation of red pandas by participating in the Association for Zoos and Aquariums’ (AZA) Species Survival Program®, which oversees and manages species’ populations in zoos by pairing individuals and monitoring breeding to maximize genetic diversity and long-term sustainability of populations. Both the SSP and the Virginia Zoo also ensure the species’ survival in the wild through support of conservation efforts and programs such as the Red Panda Network, a non-profit organization dedicated to protecting red pandas and the habitats they live in..

Currently, there are eight red pandas at the Virginia Zoo split into three different areas. Red pandas are generally solitary unless breeding or raising offspring. Bo is the Zoo’s single lady of the red panda pack. At two years old, she currently lives in the exhibit along Asia – Trail of the Tiger. Prior to coming to the Virginia Zoo in May 2018, Bo lived at the Binder Park Zoo in Michigan. Her hobbies include munching on her favorite foods like apples and grapes, taking power naps and of course, exploring and climbing new logs in her exhibit! Keepers say Bo is fearless and is often spotted at the top of the highest tree. Bo’s story is unique because her mother is Cinnamon, who was born at the Virginia Zoo in 2014 and later left to breed at another Zoo as recommended by the Red Panda SSP.

Along the main pathway near Asia is the second red panda exhibit. Currently, one male red panda can be spotted in this exhibit – Timur. Timur was born on July 6, 2015 at the Jackson Zoo in Mississippi. Timur, also known by some as Timmy, spends his time scent marking his exhibit and foraging for his favorite treats – grapes – in various types of enrichment. He also enjoys receiving grapes and apples during training sessions with Keepers. Timur has fathered two different litters of cubs here at the Zoo with female Masu.

Behind-the-scenes at the Animal Wellness Campus is where the two brothers born here at the Zoo last year are temporarily residing. Freddie and Adam were born to mom Masu and dad Timur in June 2018. They were previously on exhibit with dad Timur, but were moved to the Animal Wellness Campus recently to prepare for a move together later this fall to another zoological facility based on recommendations of the red panda SSP.

Lastly, female and two-time mom Masu can also currently be found at the Animal Wellness Campus. Masu was born on June 6, 2016 at the Denver Zoo in Colorado. Keepers say she enjoys receiving ice blocks as enrichment and is very friendly toward her Keepers. Masu is quite the busy gal, with her hands, or as we should say paws, full at the moment with three new roommates. On June 18, she gave birth to triplets.

The triplets, two males and one female, are healthy and growing. They spend most of their time napping and nursing from mom, and have more recently started exploring the nest box and outside of the nest. The Zoo auctioned off naming rights of each cub, with the proceeds, which totaled $7,500, going to support the Red Panda Network’s conservation efforts.