Tricks of the TradeClever Cat

As you may know, the animals at the Zoo all have some form of training. Training is beneficial for multiple reasons, including being mentally and physically stimulating for the animals, plus it often makes Keepers’ jobs easier when it comes time for a visit from the Zoo’s Veterinarian, Dr. Colleen Clabbers.

There are many ways animal care staff can monitor the animals’ health, such as taking fecal samples and visually looking over each individual animal on a daily basis, but occasionally they need to look deeper. Sometimes the animals have to be anesthetized for a better look-over, but doing so isn’t always the best or easiest option. Keepers are instead voluntarily training the animals, using positive reinforcement, to participate in their own exams that may involve receiving injections or having blood drawn. 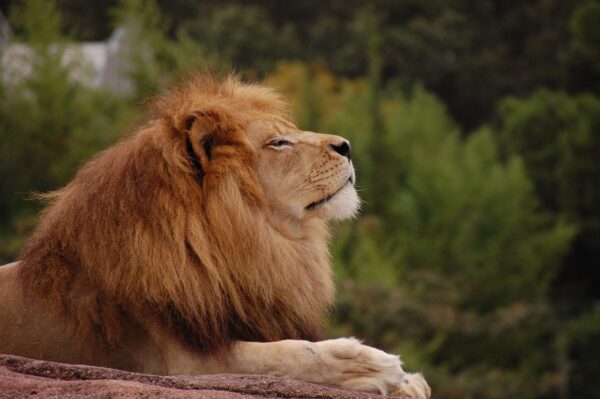 The Zoo’s adult male African lion, Mramba, has recently began voluntarily participating in weekly training sessions where Keepers are teaching the new behavior. The session starts off with Keepers separating the lions into separate stalls in their indoor enclosure. Two Keepers and Mramba then interact through protected contact, in which there is always a barrier between people and animals for safety.

One of the Keepers gives a verbal cue, along with the use of a target pole, asking Mramba to demonstrate a lying down behavior. If he chooses to lie down, the Keeper then positively reinforces the behavior by offering Mramba a reward. One might think meat would be the ultimate treat, but nothing is better to this big cat than a squirt of goat’s milk into his mouth.

Once Mramba is comfortable lying down, the second Keeper will then desensitize Mramba to having his tail touched. The Keepers communicate with each other, as well as with Mramba, so everyone has an idea of what is going on. Mramba receives a squirt of milk for every behavior demonstrated and every step the Keepers take.

Once the Keeper has Mramba’s tail, they begin conducting a fake blood draw from his tail, which will hopefully eventually become a real blood draw. The blood can then be used to monitor the health of Mramba’s organs, such as the liver and kidneys.

The next step is to clean and sanitize the area of the tail in which the needle will enter. For now, the Keepers use a blunted needle, which simulates the pressure of a real needle without piercing the skin.

Next, the Keeper uses the needle and begins drawing blood. Keepers say Mramba doesn’t even flinch and maintains his focus on the Keeper offering him goat’s milk. Keepers are hoping to attempt an actual blood draw soon. After they have collected enough blood, they then remove the needle and conclude the training session.