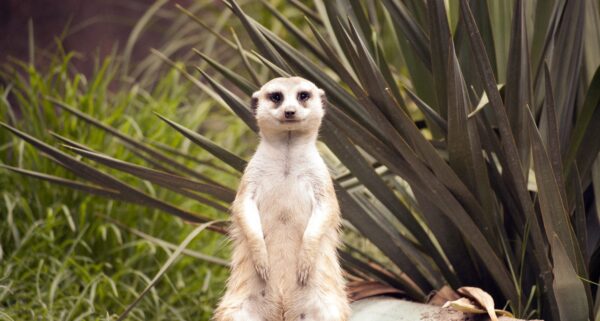 The words “cute” and “mob” normally don’t go together, but we can make an exception when it comes to one thing: meerkats. A member of the mongoose family, meerkats (Suricata suricatta) are small burrowing mammals that can be found in dry, open plains, savannas and grasslands in African countries such as Botswana, Mozambique, South Africa and Zimbabwe. They have mostly gray and brown-colored fur with dark spots on their back and around their eyes, which help protect their eyes from the sun.

Meerkats are slender and can grow up to 14 inches tall with up to a 10 inch-long tail. They love to dig and dig and dig – no seriously, they do a lot of digging; they have powerful front claws and a pointed snout that helps them to excavate for food. A typical meal for a meerkat can consist of insects, such as termites and grubs (just like Timon from the Lion King!), but they will also eat small vertebrates, some plant matter and eggs.

Meerkats live in groups called mobs, and up to 30 individuals and three different families can make up one mob. Within the group, a hierarchy is established with a breeding female at the top with her male mate. She is the only female allowed to reproduce and any other sexually mature females are typically banned from the mob and must search for a family of their own.

Gestation lasts 11 weeks, yielding a litter of two to five pups. The offspring will leave the burrows after three weeks and become independent after nine weeks. After two months, the young look like mature adults. They can live up to seven years in the wild, but can live to be 14 years old under human care.

This species is listed as least concern by the International Union for Conservation of Nature and does not have any major threats at this time.

The Virginia Zoo has its very own mob of meerkats – brothers Amadi, Tim and Hardy. The boys all share the same parents, but were born in different litters within the same year. They were born at the Cleveland Metroparks Zoo in Ohio and have been at the Virginia Zoo since December 2015.

At the top of the hierarchy in the Zoo’s mob is Amadi. Also known as Nub because his tail is the shortest in the group, Amadi was born on January 15, 2012. Meerkats are notorious for standing on their back legs to scope out their surroundings and Nub’s favorite hobby is doing just that. He also likes to explore new items in his habitat, which can be a cardboard box or container of shredded paper with hidden snacks.

Next in the hierarchy is Tim. He was born on November 16, 2012 and can also be identified by his tail, which has the tip missing. It is common for meerkat pups to chew on each other’s tails, which is why some of the now-adult brothers’ tails are shorter or longer than others. Tim spends most of his time laying out in the sun and is often curious about visitors, so he can often be spotted checking out his company.

At the bottom of the hierarchy is Hardy. August 26, 2012 is his birthday and he can be identified by tail as well, which is the longest of the trio. Keepers say Hardy is the shy one in the mob and that he often spends his time exploring the burrow.

The meerkats love to eat mealworms and a special canned diet. Keepers say they are very eager for training sessions to start and still want to keep training when they end. The brothers are currently being crate trained to help when transporting the boys for their regular check-ups from the vet.

Stop by and meet the mob in their exhibit in the Africa-Okavango Delta and if you think they’re as cute as we do, symbolically adopt them here!