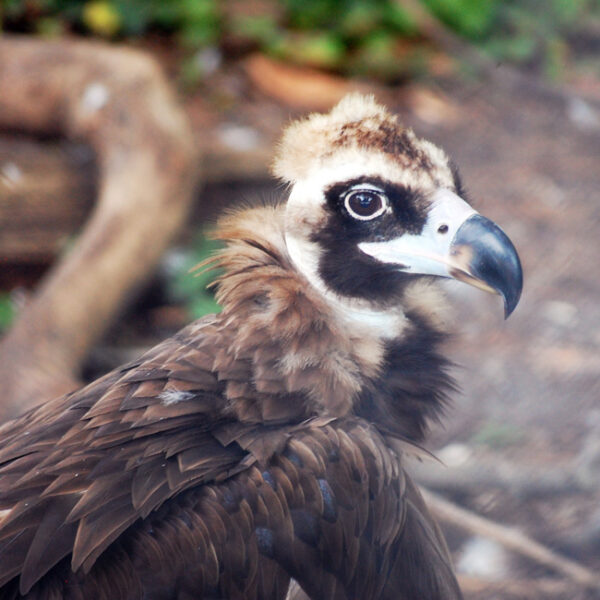 Tales of the TailsKeep Calm and Carrion

When you think of Mt. Everest, do you picture seeing anything more than snow on top of the tallest mountain in the world? We bet you wouldn’t anticipate seeing a large bird at the peak, but they have been sighted. We’re not talking about penguins, because this species can actually fly – the cinereous vulture!

Cinereous vultures, also known as monk vultures, black vultures and Eurasian black vultures, are one of the largest and heaviest raptors, or birds of prey. These flighted birds can weigh up to 28 pounds and measure over three-and-a-half feet tall with a massive wingspan of 10 feet!

Cinereous means ash-grey, like the color of the birds’ bald heads and necks. Their bodies are dark brown, and their fluffy, monk-like feathered neck collars become lighter brown to white as they age. These vultures have short feathers on their feet, necks and heads to keep the birds from accumulating debris and becoming overly dirty while eating.

Cinereous vultures have thick beaks that are well suited for feeding on tough organic materials. Like most birds of prey, these vultures mainly eat carrion, or decaying animals, from medium-sized or large mammal carcasses. Snakes, fish and insects have also been recorded as food items. Under human care, these birds are typically fed rodents and fish.

While vultures are toward the top of their food chain, they face ongoing threats from their only true predator: humans. Cinereous vultures are viewed as pests in their native habitats in European countries like Spain and France, and in parts of Asia and the Middle East like China, India, and Turkey. As food sources continue to decrease, the birds are seeking out new food sources. Humans often shoot or deliberately kill the birds by setting traps with poisoned bait, and the birds are listed as near threatened to extinction by the International Union for Conservation of Nature (IUCN) due to these threats. The species’ global population is estimated at only roughly 14,000-20,000 mature individuals.

The Virginia Zoo currently has two cinereous vultures. Eve is the oldest of the two, at 13 years old. She just recently celebrated her birthday on June 7. Eve was hatched at the Birmingham Zoo then moved to the Milwaukee County Zoological Gardens in 2010 and arrived at the Virginia Zoo in 2014. Eve spends her time training with Keepers and chasing Meera around the exhibit. For enrichment she enjoys ripping up cardboard and often suns her wings after bathing.

Meera was born on June 15, 2011 and will be turning 8 years old this weekend! She was hatched at the Buffalo Zoo and arrived at the Virginia Zoo one year later in 2012. Meera enjoys anything that can roll around and grab with her talons for enrichment, including coconuts and ostrich eggs. Keepers say she seems big, scary and tough when she stomps around the exhibit with her wings open, however she is often scared by a lot of things.

Even though Eve is the oldest of the two raptors, she only weighs around 18 pounds while Meera weighs just over 20 pounds. Both are fed a daily diet of rats, mice and Norfolk spot or smelt fish. The birds will ocassionally leave random fish heads around the exhibit, which can best be seen by riding the Norfolk Southern Express Train.

Did you know that all of the animals at the Zoo, including the vultures, are available for Zoodoption? Symbolically adopt these birds of prey today!