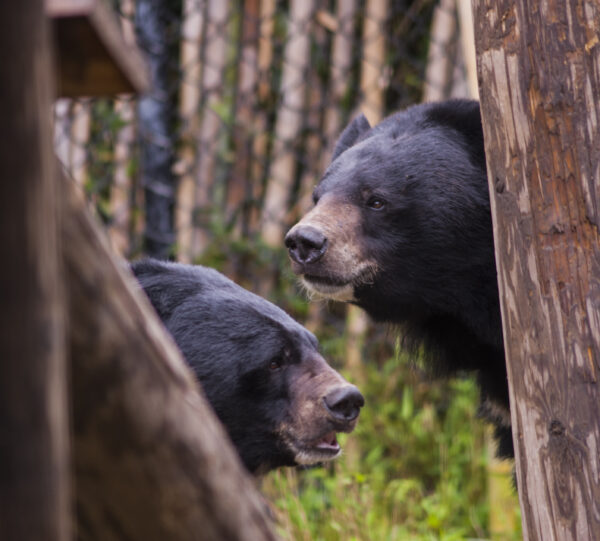 Tales of the TailsTo the Moon and Back

In early 2018 we introduced you to a beary cool pair of animals, the sun bears. But did you know the Virginia Zoo is home to another pair of bears? Although the two species are similar – they both are black in color, have a crescent moon on their chests and are native to Asia, the moon bears are a unique species that you’ll soon find yourself…loving to the moon and back. It’s National Bear Awareness Week, so why not get to know these unbearably awesome mammals?

This species of bear has many nicknames. We know them best as moon bears, but they are also known as white-chested bears as well as their formal name, Asiatic black bears. They are called moon bears and white-chested bears for the signature white, off-white and sometimes yellow crescent moon-shaped patch on their chests. Apart from their chest, the bears are covered in sleek, black fur and are similar in size to their North American bear relatives. Moon bears weigh between 200 to 400 pounds on average and can stand up to six feet in height.

Asiatic black bears are native to parts of the Middle East and Asian countries such as Afghanistan, Bangladesh, China, Japan, and Vietnam and have recently been spotted in a rare sighting in Korea. Their typical habitat can range from forests to shrublands, grasslands or even wetlands.

The species is listed as vulnerable to extinction by the International Union for Conservation of Nature (IUCN) due to habitat loss from logging and expansion of infrastructure such as roadways. The bears are also illegally hunted for their skins, paws and gall bladders, which are believed to hold medicinal qualities by native people, although this has not been proven scientifically.

Moon bears are omnivorous and in the wild their diet consists of shoots, forbs and leaves in spring, insects and a variety of tree and shrub-borne fruits in summer, and nuts in autumn. The moon bears at the Virginia Zoo are fed a diet of fruit and root vegetables daily, with an occasional meal of fish such as smelt or Norfolk spot, hard-boiled eggs, superworms and mixed nuts. The Zoo’s moon bears also recently received a special Animeals with a unique twist on their regular diet.

Chai and Thai are the Zoo’s two moon bears that share an exhibit in the Asia – Trail of the Tiger. The pair have been at the Zoo since 2011 and lived at the Metro Richmond Zoo before coming to Norfolk. The brothers were both born in a litter of four cubs on January 16, 2006 at the Denver Zoo in Colorado.

Chai is the larger of the two bears, weighing 368 pounds. He is distinguished from his brother by his larger ears, which staff often refer to as his “Mickey Mouse” ears. Chai spends his time swimming in the pool in his exhibit and often enjoys receiving his daily diet inside cardboard boxes, which he usually shreds and makes a nest with. Chai also likes to stick out his tongue at Keepers, which reaches farther than his brother’s.

Thai weighs in at 315 pounds and has smaller, less prominent ears unlike his brother. His favorite food is watermelon. Thai can often be seen climbing the logs and platforms in his exhibit or playing with a large weeble-wobble toy or puzzle feeder with his diet inside. Keepers say Thai thinks he’s smarter than his brother, and often proves his intelligence by learning new husbandry behaviors quicker than Chai.

The brothers can often be seen on exhibit together, but are also given alone time while feeding and to prevent sibling rivalries, just as human siblings fight with each other. On your next visit to the Zoo, be sure to say hello to Chai and Thai and be sure to symbolically adopt the brothers through our Zoodoption program. Adorable moon bear plush can be included!