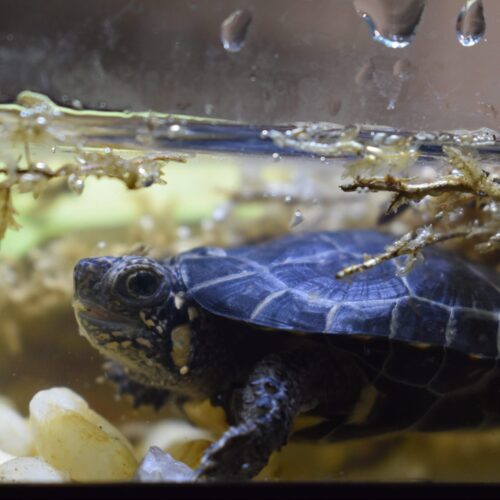 It’s World Turtle Day! The Zoo has more than a dozen species of turtles and tortoises, from program animal ambassadors who live behind-the-scenes, to hatchlings that can be found in the World of Reptiles Nursery. The species that live at the Zoo include the second largest in the world – the Aldabra tortoises, to the smallest in North America – the bog turtles. Although small, this species is proving size doesn’t matter when it comes to impact, which is why it’s important for you to learn about bog turtles.

Bog turtles are relatively small, with adults averaging three to four-and-a-half inches in length along the shell and new hatchlings measuring around the size of a quarter. The species earned its name from the habitat it can be found in, which can include bogs, swamps, marshes and wetlands away from large bodies of water in North American states as far north as New York down to Georgia and reaching west into Tennessee.

These tiny turtles have two important roles in their habitats. The first role they play is pest control. Bog turtles are omnivores that eat seeds, berries, green vegetation and bugs – a lot of bugs. They help control the insect population of many pest insects and larvae including disease-carrying mosquitos. The second and most vital purpose for bog turtles is as an indicator species. Just like many reptiles and amphibians, these turtles are typically only found in healthy living conditions, where water is clean and the environment is biologically diverse. If the water quality is uninhabitable, bog turtles can indicate this by choosing to live elsewhere, however this isn’t as easy as you may think.

The species is listed as critically endangered to extinction by the International Union for Conservation of Nature (IUCN) due to habitat loss and fragmentation. Bogs, marshes and wetlands are often converted to farm or residential land, leaving the turtles without their habitats. Their habitats are also fragmented, meaning the ideal environment for the turtles has a physical separation, such as too dry land or even infrastructure, which separates populations and prevents them from breeding and creating new genetically diverse populations.

There are many conservation efforts and organizations committed to saving the turtles’ habitats including the Turtle Survival Alliance, however the species also faces a high immortality rate in hatchlings. The turtles lay one clutch of up to six eggs per year, but only half of the eggs, on average, will hatch and survive to reach maturity, which occurs between the ages of four and 10 years old. This is where other organizations, including zoological facilities, step in.

The Virginia Zoo is one of approximately ten zoos that breed bog turtles through the Species Survival Plan® (SSP). If you aren’t already familiar with this program, it is run by the Association for Zoos and Aquariums (AZA), and oversees and manages species’ population in zoos by pairing individuals and monitoring breeding to maximize genetic diversity and long-term sustainability of populations. The SSP also ensures the species’ survival in the wild through supporting conservation efforts such as programs that protect or restore habitats.

How does the SSP do all of that? An SSP coordinator uses a “family tree” to determine which mature males and females are eligible to breed based on the genetic diversity of the captive population. Bog turtles can be sent from one zoo to another for breeding, and once paired, their breeding is monitored by Zoo Keepers.

Before bog turtles can breed, the sex of each individual must be determined. Males and females are determined by looking at the plastron, or the underside of the shell. Mature males have a concave, or sunk in, plastron while mature females have a flat plastron. Juveniles are difficult to sex, which is why it can take years before determining sexes.

Breeding bog turtles has it’s own process. Once the turtles emerge from brumation, or underground hibernation over winter, a male and female are introduced to each other. If they choose to mate, Keepers will see nesting occur between April and July. Once eggs have been laid, Keepers will monitor incubation, which can last from 42 days to 80 days, and if necessary, they will retrieve the eggs and place them in an incubator to increase the odds of survival. After the incubation period, the eggs hatch into baby bog turtles who will slowly mature and hopefully go on to breed.

The Virginia Zoo currently has six bog turtles, including a breeding pair, in its creep (group of turtles). So far, seven bog turtles have been hatched at the Zoo and three of them can currently be found in the World of Reptiles Nursery. The Zoo’s bog turtle SSP has been very successful. We have raised the second largest population of bog turtles in the entire Zoo community, allowing us to help this awesome species creep away from extinction and towards survival! Be sure to celebrate all of our turtle and tortoise species for World Turtle Day, especially these little fighters!