Zoo HorticultureEvery Rose Has its Thorns

The Zoo’s Rose Garden is undergoing a renovation that entails removing all roses from the location. This garden has been plagued with Rose rosette disease (Emaravirus sp.) also known as witches’ broom of rose, a virus transmitted by an eriophyid mite (Phyllocoptes fructiphilus Keifer). These eriophyid mites are microscopic and usually are undetected. The mite is wingless; however, can passively travel in the wind, on clothing or equipment. Rose rosette was first discovered in the United States in the 1940s and has been observed in recent years in the Eastern U.S. as well as the Midwest and southern states.

Found in newly growing rose shoots, the mites feed and reproduce in this location.  The shoots become elongated and contorted, or bent out of shape, and resemble a witch’s broom. The symptoms may sometimes resemble herbicide damage, such as spraying weed killer on your lawn. Progression of this disease results in small leaves and shortened petioles (the stalk that joins a leaf to a stem), with bright red, shorter lateral buds. Within two to five years, plants are usually killed. Many of the rose plants at the Zoo have suffered with the spread of this disease, leaving the majority in a deteriorated condition. 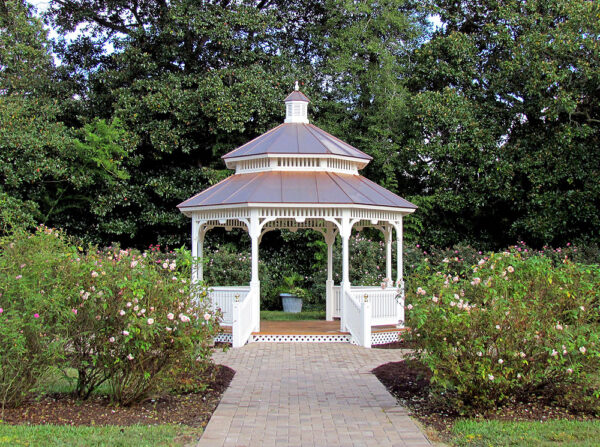 Rose rosette is extremely difficult to eradicate, leaving the Zoo no choice but to remove the roses from the iconic garden and event venue. It was a difficult decision for the Horticulture Department to make; however, this disease is limited to plants in the genus Rosa, and therefore should not affect other plants or gardens. It is host specific and when found on one plant species, it will not usually feed on other species. Consequently, the Rose Garden will be no more, but will now become the Formal Garden. Various shrubs and hedges will replace the removed roses and another flora vignette will bloom, with the gazebo as the centerpiece. Please bear with us as we work to transform the area!