There’s a famous song, “Welcome to the jungle, it has tons of rain”, or at least that’s what the lyrics should have said! Jungle is a nickname for rainforest, which is a type of biome that is hot, humid, has very dense vegetation and receives a high amount of rainfall every year. There are two main types of rainforests, temperate and tropical. Temperate rainforests are found closer to coastlines and receive around 100 inches of rain annually, while tropical rainforests receive upwards of 400 inches of rain per year and can be found in areas close to the equator.

Rainforests are considered endangered biomes because they only encompass six percent of the Earth’s surface and are continuously dwindling in size due to deforestation and human overdevelopment. They are the oldest living ecosystems and contain more than half of the world’s animal and plant species, at least the ones that have been discovered! Warm temperatures and moisture make rainforests perfect habitats for all kinds of species.

At the Virginia Zoo, there are dozens of species native to rainforests around the world, and each animal’s habitat at the Zoo is designed to be just like the species would live in the wild. To create the ideal environment, you have to investigate each individual rainforest layer. Rainforests have four basic layers, also known as stories. Each story is unique because they receive various amounts of sunlight and rain. As a result, different plant species grow in each layer and animals have adapted to living in layers that fill their niche, or best suit their needs. Here are a few rainforest species you can find at the Zoo and what type of tropical rainforest layer habitat they are found in!

The lowest rainforest layer is known as the forest floor, which receives the least amount of sunlight and rain. Very few types of plants thrive on the forest floor, but there is an abundance of grasses and shrubs. Decomposition occurs in this layer, recycling nutrients into the soil for vegetation in other layers to use. Despite having the least amount of plant life and food sources available in comparison to other rainforest layers, ground-dwelling animals can still be found here.

In the rainforests of Asia, Malayan tigers thrive among any concealing greenery they can find, which aids in stalking prey, such as deer and boar, and helping to stay hidden from potential danger. For the big cats, poaching for skins and the capture of cubs for the illegal pet trade, as well as deforestation for the harvesting of palm oil are major threats that have caused the species to become critically endangered. The Zoo’s three Malayan tigers, dad Christopher and 3-year-old cubs Stubbley and Osceola, can be found along the Asia – Trail of the Tiger.

In the rainforests of Australia, giant dinosaur-like birds can be found living on the forest floor, and there’s a reason they’re on the ground and not in trees: they can’t fly. The Southern cassowary is the third-largest bird species in the world. Cassowaries live on the forest floor and survive by eating fallen fruits from trees, although the ones at the Zoo are fairly undiscriminating and will also eat eggs. Thanks to their diet, cassowaries are excellent seed dispersers and help new plants grow. This cassowary species is listed as least concern, however their populations are decreasing due to hunting. The Virginia Zoo has three cassowaries – Elgie and Hallager can be found in exhibits in the Asia – Trail of the Tiger and Boris lives in an exhibit adjacent to the Australia Walkabout.

The largest spider in the world by mass and size, with an average body size of nearly five inches and a leg span of up to 11 inches, can be found in the rainforests of South America. The Goliath birdeater is a species of tarantula that, despite its name, doesn’t actually eat birds that often. They mostly eat mice, frogs, lizards and invertebrates. Although they like to burrow under rocks and tree roots, birdeaters will also seek shelter from flooding rains by climbing to the emergent layer of the rainforest. The Zoo’s Goliath birdeater can be found in the World of Reptiles and Friends.

Just above the forest floor is the understory, where plants have huge leaves to soak up as much sunlight as they can get and an abundance of insects and amphibians can be found. The understory is very hot and wet from humidity, making it the perfect environment for many animal and plant species. Plants include ferns, vines and small trees, including some fruit-bearing trees like banana trees. These type of plants also help animals camouflage with their surroundings.

Amphibians thrive in the understory because they are able to absorb the humid, wet air to keep their skin moist. The golden mantella lives in pandanus rainforests in Madagascar, which are palm and mangrove rainforests found close to rivers. The frog species is listed as critically endangered due to habitat loss, which restricts the population to a very small area of land with human development surrounding it. This species of frog, and dozens of others, can be found in the Zoo’s World of Reptiles.

The king cobra is one of many snake species found in the rainforests of Asia. They can thrive on the forest floor, but are also tree-dwelling, or arboreal. King cobras are often considered the superior cobra species because they can eat anything they can fit in their mouth, but mostly restrict their diet to cold-blooded animals, especially other venomous snakes. Not only are they one of the longer snake species, but they are also one of the most venomous, with enough venom in one strike to kill 20 men or one full-grown elephant. Despite being a top rainforest predator, king cobras are listed as vulnerable to extinction due to habitat destruction. Clarice is the Zoo’s female king cobra who can be found in the World of Reptiles.

The canopy is the most commonly known layer of the rainforest. In this primary layer towering over the understory and forest floor, most animal species can be found because food is also abundant. Plants also weave in and out of each other and create coverage for animals, making the canopy a highly desirable habitat.

In the rainforests of South and Central America, these slow-moving mammals have stolen hearts all over the globe. Whether two-toed or three-toed, sloths are one of the most popular rainforest animals. Sloths hang from or sit on branches in the canopy and eat fruits and flowers, which are easier to find here than other layers. About once a week they climb down to the ground to defecate, which puts them at risk to become prey. Sloths themselves are a perfect environment for algae to grow on their moist hair, and tiny bugs also enjoy living on sloths as well. These lovable creatures are also at risk for extinction due to habitat destruction. There are currently three two-toed sloths at the Zoo; KC is an Animal Ambassador that lives behind-the-scenes and new arrivals Honey and Mervin are acclimating to their new exhibit in the World of Reptiles.

Rhinoceros hornbills are a species of bird known for their jet black bodies and colorful horn on their head, also known as a casque, which resembles the horn of a rhinoceros. They are found in rainforests in Asia and need large trees to nest and feed. The birds’ diets include mostly fruits and occasionally insects, small animals, and birds. When nesting, a bonded pair seal the female inside a hole in a tree using mud so she can incubate the eggs, and the male will feed and care for his mate through a tiny hole. Rhino hornbills are vulnerable to extinction due to habitat destruction and hunting. These birds are harvested for their meat and the use of their casques and feathers for ceremonial fashion. In the Zoo’s Asia – Trail of the Tiger, bonded pair Oona and Riobi can be seen flying around in their aviary.

The top layer of the rainforest is known as the emergent layer. This story consists of flying creatures, some primates and the tallest trees. The emergent layer receives the most rain and sunlight, and is also the windiest, occasionally reaching up to 40 miles per hour. Animals and the wind help scatter and blow pollen and seeds from this layer to the forest floor so new trees and plants can begin growing. Animals that live in the emergent layer must be lighter in weight, as the branches of trees are not very sturdy in comparison to those in the canopy and understory. 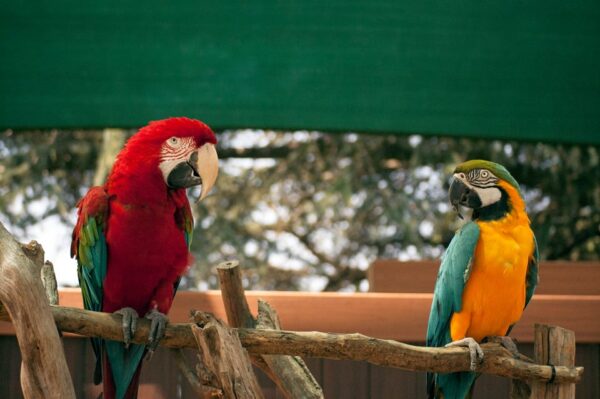 Macaws, which are parrots, live in the emergent layer of rainforests in South America. There are more than a dozen species of macaws, including the green-winged macaw and blue and gold macaw. These colorful birds eat fruits and seeds. They can live in pairs or groups and often talk loudly to each other, but don’t talk to other birds like they do with humans. Macaws mimic human speech when under human care, but would never learn actual words or actions in the wild. While not all macaw and parrot species are threatened with extinction, many face threats including habitat loss and the international pet trade, in which individuals are wild-caught and then sold as pets. Big Red and Billie Jean are the Zoo’s two macaws. The are Animal Ambassadors and live behind-the-scenes, but can be seen by the public during education programs.

Bornean and Sumatran orangutans are from the rainforests of Asia. The critically endangered animals are the largest arboreal mammals in the world, building their nests high in the tree tops and occasionally coming down to the ground. They primarily eat fruits, but also enjoy eating leaves, bark, insects and flowers. Orangutans are very slow breeders, only giving birth to one infant every six to eight years. Their populations are affected by severe habitat loss and fragmentation, illegal hunting for meat and natural disasters, such as fires that occur yearly in their native habitats. At the Zoo, Schnitz and Pepper can be found in the Asia – Trail of the Tiger indoor orangutan exhibit and Solaris, Dara and baby Sofie can be found in the outdoor exhibit when temperatures are above 45 degrees.

What do all rainforests and the species of plants and animals that live in them have in common? They are facing extinction. Rainforests are the source of many items that we use in our own homes and as a consequence rainforests are being destructed to harvest chocolate, sugar, coffee, cinnamon, palm oil, rubber, medicine and more. Animals are being forced to find new homes or lose their lives due to human conflict. To help save the rainforests and their species, you can make a conscious choice to change your buying habits by purchasing sustainably harvested items, such as those certified by the Rainforest Alliance or the Roundtable on Sustainable Palm Oil, or avoid these products altogether. You can also donate to the Virginia Zoo’s Conservation Fund, which supports initiatives that conduct on-the-ground conservation work in rainforests, to help save these forest-dwelling species from going extinct within our lifetime. Help us keep our rainforests thriving.