Departures and ArrivalsChanges for the Cheetahs

After almost three years at the Virginia Zoo, cheetahs Chester and Rico are leaving to head across country in search of mates. The brothers, who came from the Metro Richmond Zoo in April 2016, are being relocated to the Wildlife Safari in Winston, Oregon as part of the Association of Zoos and Aquariums (AZA) Cheetah Species Survival Program (SSP). This will be the first time the boys will be breeding, so we wish them luck in becoming first-time fathers and helping to rebuild diminishing cheetah populations. 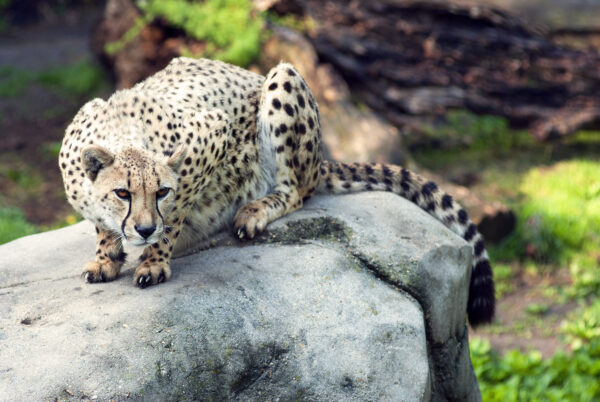 The cheetah is listed as vulnerable to extinction by the International Union for Conservation of Nature (IUCN) due to habitat fragmentation, human-animal conflict and poaching of cubs for sale in the illegal pet trade. It is estimated there are less than 7,000 cheetahs left, so Chester and Rico are vital to the conservation of their species.

Chester and Rico will be joining a very successful cheetah breeding program in Oregon. Cheetah breeding in zoological facilities is typically only successful if the males and females are not housed together and are introduced only for breeding. If housed together, males and females acclimate to each other and the females can stop cycling, preventing successful breeding. To increase the chances of success, multiple outside habitats and completely separate inside enclosures are needed, which is the type of set-up that Chester and Rico will be going into. Currently the Virginia Zoo has one main outside and inside area for our cheetahs, making our exhibit better suited for single animals or non-breeding, bonded pairs.

During their time here, Chester and Rico have been a favorite by Zoo visitors for their unique personalities, grace and evident love for each other through grooming and napping together. The five-year-old brothers spend most of their time doing what cats do best, lounging around or exploring their exhibit by climbing on their favorite rocks or even up into their tree! They are the first cheetahs to ever live at the Zoo, and they certainly aren’t the last. The Zoo will be welcoming two female cheetahs to the Africa – Okavango Delta exhibit.

Charo, a six-year-old cheetah, and Lima, only two years old, will arrive from the Fossil Rim Wildlife Center in Texas to home Virginia their new home. This pair of cheetahs has a unique relationship, as females are usually solitary and rarely live in groups with other females. In May 2017, Charo gave birth to a litter of three male cubs. At the same time in St. Louis Lima was born, but her biological mother was unable to care for her. Keepers reacted quickly to transport Lima from St. Louis to Texas to be placed with Charo thanks to a cross-fostering program for cheetahs. The hopes were Lima would be accepted and cared for by Charo, who was a first-time mother. The transition was a success and the two have been bonded since. You can read more on their story from Fossil Rim.

Once the girls arrive at the Zoo, they will be given time to adjust to their new exhibit and may not be visible by the public immediately. Until then, say your farewells to Chester and Rico before they leave!