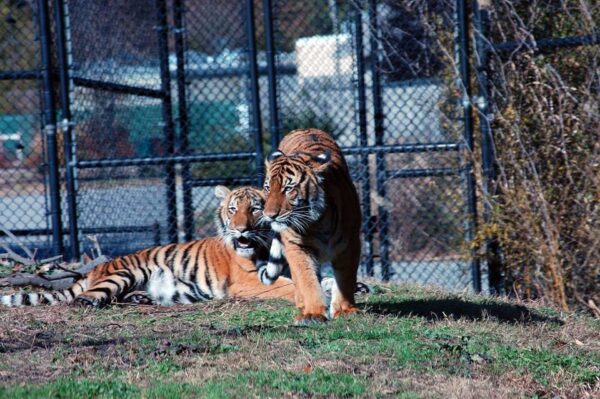 Tales of the Tails Animal StoriesEarning Their Stripes

The year is now 2019, and the Virginia Zoo is excited to continue to offer its popular blog series Tales of the Tails, which is a monthly blog featuring a species of animal and the individuals representing that species who are found here at the Virginia Zoo. We’ve given Zoo fans a plethora of information and fun facts on some of their most favorite animals, from the giraffes to the tapirs, the siamangs to the Aldabra tortoises and even our rhinos and Siamese crocodiles. But there’s another species at the Zoo that has stolen the hearts of everyone who has ever come to know them: the tigers.

Tigers are easily recognized by their black stripes on bright orange fur, and black ears with a single white dot on each. Tigers typically live in tropical rainforests, evergreen forests, temperate forests, mangrove swamps, grasslands and savannas in Asian countries such as India, Indonesia, Bangladesh, Thailand, Malaysia, Nepal, China and some parts of Eastern Russia.

These big cats are typically solitary, only coming together in mating pairs for a few days. After a 90 – 112 day gestation period, the female will then give birth to a litter of up to four cubs in which she will raise for up to two years. The mortality rate in juvenile tiger cubs is high, and most do not survive to reach two years old. If the cubs do survive, they can live up to 15 years in the wild and more than 20 years under human care. 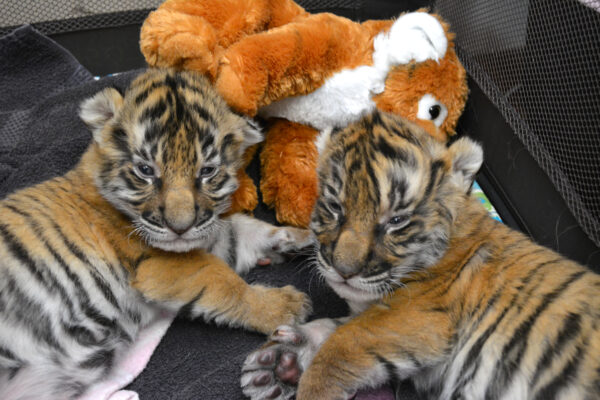 In total, there are less than 4,000 tigers left in the wild, with several factors contributing to their declining populations. Tiger habitats are being cleared for agriculture, timber, roads and other developments, forcing tigers to leave protected areas and into areas where human-animal conflict is more likely. Tigers have been known to prey on livestock and are often killed by farmers in retaliation. The big cats are also poached for their skins and cubs, which are sold in the illegal international pet trade.

Palm oil is another major factor contributing to the declining tiger populations. Viewed by many as a good alternative to trans-fats, palm oil is found in candy, cookies, baked goods, shampoo, cosmetics, pet foods and even cleaning products. When palm oil is produced at certified sustainable plantations and mills, rainforest areas are protected. However, non-sustainable plantations result in the destruction of critical habitat for not only tigers, but orangutans, elephants, sun bears, rhinos and many other animals. We encourage you to take action and make globally responsible consumer choices that help save tigers by reading more about palm oil here.

The Virginia Zoo has one species of tiger, the Malayan tiger, with three individuals living at the Zoo. The Zoo contributes directly to the conservation of these big cats by participating in the Species Survival Program® for tigers, which oversees and manages species’ population in zoos by pairing individuals and monitoring breeding to maximize genetic diversity and long-term sustainability of populations. The SSP also ensures the species’ survival in the wild through supporting conservation efforts such as programs to combat poaching.

Malayan tigers were once considered Indochinese tigers until DNA testing in 2004 revealed genetic differences, resulting in the new species. Malayan tigers are found only in southern and central Malaysia.

Malayan tigers are a smaller species of tiger, with adult males weighing around 260 pounds, while females average 220 pounds. Tigers prey on animals of all shapes and sizes, including small prey such as birds, fish, rodents, amphibians, and reptiles in addition to larger mammals such as primates, porcupines, elephants and rhinos.

Christopher is the first of three male Malayan tigers at the Virginia Zoo. He was born on April 1, 2011 at the San Diego Zoo and arrived at the Virginia Zoo two years later. Christopher spends most of his time scent marking, which is common for tigers to do to mark their territory or home range. He also enjoys enrichment such as the large red boomer ball and rolling around in pumpkin pie spice. In 2016, Christopher and Api, who moved to another zoo per an SSP recommendation to hopefully continue contributing to the tiger population, had a litter of two cubs. Osceola and Stubbley were ultimately hand-raised by Keepers after noticing Api neglecting proper maternal care.

The two cubs were an immediate hit with the public after the announcement of their births. Visitors were given chances to see the pair up-close during special window viewing hours at the Animal Wellness Campus, and have watched them grow from two-pound small cats, to now more than 240 pound big cats. After a naming contest, the two cubs were named Osceola and Stubbley.

Osceola is the oldest of the two cubs. He was born January 6, 2016 at the Virginia Zoo, making Zoo history as the first tiger cub born at the Zoo. Osceola enjoys rolling around in water-based paint and playing with enrichment items from Keepers. He can also be found wrestling with his brother, as they share time on exhibit together.

Stubbley is the youngest of the two cubs, born on January 7, 2016. Stubbley shares the same exact interests as Osceola, and the pair are often inseparable. Stubbley and Osceola both also like to swim and play in their pool in the warmer months and can be seen pawing at visitors at the viewing glass.

Zoo fans have all been wondering if and when the tigers will start mating, and potentially leaving the Zoo. While the cubs, who are more like teenagers now, are reaching adulthood, there are no plans yet for them to leave the Zoo in search of breeding, nor is the Virginia Zoo expecting any new tigers to arrive. Christopher also does not yet have a genetic match to be paired with, and so all three tigers are here to stay for just a little while longer.