For Zoo Bird Keepers, a typical day involves checking up and feeding our feathered residents found all around the Zoo. Soon Keepers will also be spending parts of their day relocating many of the bird species to their winter enclosures where they will stay during cooler weather to protect them from the elements. A few weeks ago, when Hampton Roads was under imminent threat from Hurricane Florence, several of our birds were moved into safer indoor enclosures to ride out the storm. The Luzon bleeding heart doves found in the Asia Aviary were no exception to the move, and the transfer couldn’t have come at a better time. 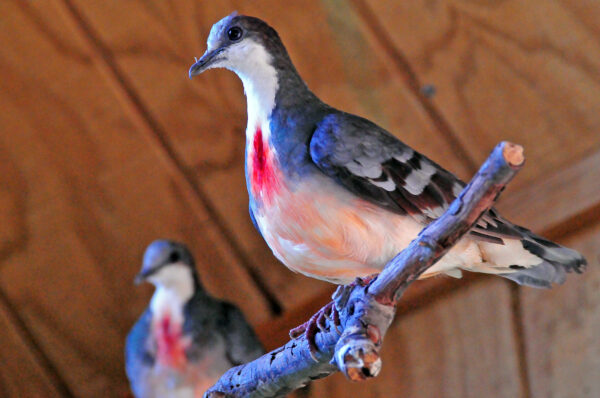 Luzon bleeding heart doves are a species of dove that, like most dove species, spend most of their time on the ground, only flying to trees to roost, nest or sleep. They are light blue-grey in color with white chests and a patch of blood-red feathers centered on their chests, which gives them their unique name. They are endemic to Luzon in the Philippines and are near threatened with extinction due to hunting and logging of their habitat.

The breeding pair of doves laid two eggs just before the move, and those eggs hatched into two needy chicks on September 7. These birds typically lay one to two eggs per clutch and are currently on a Species Survival Plan® at the Zoo. This program oversees and manages the species’ population in zoos by monitoring breeding to prevent overpopulation and inbreeding, and also ensures the species’ survival in the wild through conservation efforts, so every animal born or hatched under an SSP at the Zoo is dire to the survival of that species.

When Keepers went to check on the new hatchlings in their behind-the-scenes habitat shortly after hatching, they noticed only one chick growing larger and being solely cared for by the parents. The second, smaller chick was being neglected for an unknown reason, and Keepers knew it was time to step in and begin hand-rearing the chick.

This isn’t the first time a chick has been hand-reared at the Zoo. In 2017, Keepers helped raise Jezebel, a Southern ground hornbill chick, after they noticed the parents weren’t able to raise her. The Luzon bleeding heart dove chick was taken to another behind-the-scenes area when it was around a week old and has been raised by Keepers for more than a month now.

Bird Keepers began caring for the chick by hand-feeding it eight times every day for a week. The food consisted of a liquid bird formula, which includes its daily recommended nutrients and was fed using a syringe. Over time, Keepers reduced daily formula feedings and additional food like soft bird diet and mealworms were slowly introduced.

“The goal was to see the chick eating food on its own, which it is now doing,” said Lead Bird Keeper Tara Culbertson. “We are hoping to introduce it back to its parents and sibling, as well as an older brother this week,” Tara added. Keepers have been monitoring its weight by measuring how much it gains every day after its meals to make sure it is growing strong enough to be on its own. When they first began caring for the chick it weighed almost one ounce and last weighed in at four-and-a-half ounces – a good sign of a healthy, growing bird!

Luzon bleeding heart doves reach maturity at around three to four months old, so the chick is constantly growing and is almost as big as its sibling that is being raised by the parents. Both chicks are starting to grow in their blood-red chest feathers and have been flapping their wings in attempts to start flying! Keepers won’t know the sex of either chick until they are fully grown, as their adult feathers will then need to be sent off for DNA testing. Zoo visitors won’t be able to see the birds until next Spring when they will be moved back onto exhibit in Asia – Trail of the Tiger, but feel free to admire these photos of the adorable chick’s transformation.