Tales of the TailsAround the Croc

Halloween is around the corner, so what a better time to introduce two of the “scariest” animals at the Zoo. Once you meet them, however, you’ll realize they aren’t so scary after all, and that like the other animals at the Zoo, they are unique and play an important role in the ecosystem. Now, if we haven’t scared you off, meet two of the Zoo’s newest reptiles, the Siamese crocodiles.

The first thing we need to clear up is the difference between crocodiles and alligators. Alligators and crocodiles all belong to the Crocodilian family, just as monkeys and apes are all primates. The major difference between the two is their snout. Alligators typically have wider u-shaped snouts, and crocodiles have more narrow, v-shaped snouts. The next major difference is their teeth. Alligator teeth protrude from their mouths at around the same length. Crocodiles, on the other hand, are often referred to as having a “toothy grin” in which you can see the fourth tooth on each side of the lower jaw sticks up over their upper lip.

Siamese crocodiles live in slow-moving rivers, streams, marshes, and swamps in southeast Asian countries like Laos, Cambodia, Myanmar, Thailand and Vietnam. They are small to medium-sized, reaching up to 13 feet in length from nose to tip of the tail. They can live between 25 and 35 years, but most won’t reach that age due to poaching for their skins.

There are less than 150 Siamese crocodiles in Cambodia and less than 1,000 total individuals remain in the wild. Despite being an apex predator in their natural habitats, meaning they have no competition for prey, Siamese crocodiles’ only true threat is humans. This species is still recovering from commercial hunting for their skins in the twentieth century. Illegal collection of their eggs, habitat loss, and drowning in fishing gear are also major threats to this species, urging conservationists to take action to help save these crocodiles from going extinct.

At the Virginia Zoo, our Siamese crocodiles are under a Species Survival Plan®, established by the Association for Zoos and Aquariums. This program oversees and manages species’ population in zoos by monitoring breeding to prevent overpopulation and inbreeding. The SSP also ensures the species’ survival in the wild through conservation efforts such as programs to combat poaching and programs where new crocodiles are reintroduced back into the wild. Maximizing the genetic diversity of the species through breeding is also a priority of the SSP, which is why animals are often transferred to different zoos. 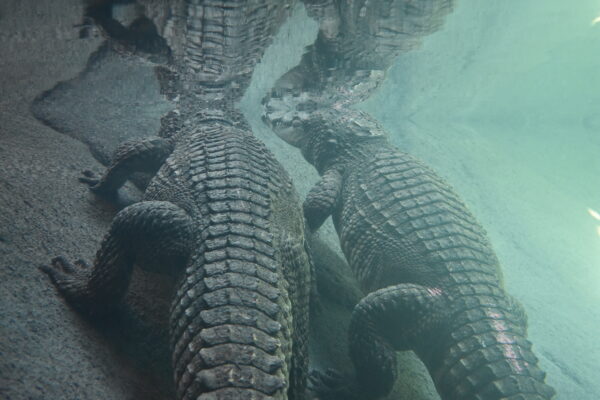 Both of the female crocs are very similar, measuring approximately seven feet long and weighing around 150 pounds. They have the same diet, which consists of 10 crocodile mazuri pellets, given three times a week. The pellets are designed to be tossed into the water to encourage the animals to come to the surface for feeding. Keepers say the girls tend to be shy and spend most of their time floating in the middle of their pool, but they have more recently started to beach on land and explore other parts of their marsh.

Shadie was hatched on August 26, 2008 at the St. Augustine Alligator Farm, where both of her parents can still be found today. The name Shadie was named through the Zoo’s annual Zoo To Do event. She often rubs her snout onto different objects around the marsh.

The other female crocodile, who has yet to be named, was hatched on July 15, 2008 at the Detroit Zoo. After a stint at the St. Augustine Alligator Farm, she and Shadie, as well as their new Keepers, made the 650-mile journey to the Virginia Zoo in July.

Since it’s the month of Croctober, and the second of our two crocs is without a name, now is the chance for our Zoo fans to give her an identity! Our three reptile Keepers have submitted their own ideas, but the public is also encouraged to suggest and vote on names for the croc for $1 per vote or entry. Help us name our crocodile and support conservation all at the same time. Voting opens on October 24th HERE.