Reason for Visit: Episodes of regurgitation after eating

Diego is a one year old male Screaming hairy armadillo who lives in the program animal building here at the Virginia Zoo. He was one of two animals in his litter, along with his sister, Dora, who is also housed in the same building. Diego has always been smaller than his sister, but that never affected his ability to eat, run and play like a normal armadillo. Earlier in the year, zookeepers noticed that Diego regurgitated after eating. Initially, it was thought that it was attributed to his eagerness at meal time, where he would get so excited he would gobble up his food too quickly and sometimes make himself sick. However, over time these episodes started to occur more frequently, so Diego made a visit to the veterinary hospital at the Animal Wellness Campus.

Performing a physical exam on an awake armadillo can be difficult. They are covered with a thick armor of bony plates and overlapping scales called scutes and have the ability to curl up into a ball, which protects them from things they perceive as a threat. Therefore, in order to perform a thorough physical exam, Diego was placed under anesthesia. There are many things that can cause regurgitation including infectious disease, intestinal obstruction, dietary indiscretion, etc. By anesthetizing him, we were able to obtain a sample of blood to assess his overall health and perform radiographs to rule out potential obstructions.

Unfortunately, an armadillo’s scutes obscure much of what is seen on a radiograph, which prevents a full assessment of the internal organs. In small animal medicine, you can feed a dog or a cat barium, a contrast agent, and take serial radiographs to track the contrast agent as it moves through the gastrointestinal tract to identify problems. Since Diego needed to be anesthetized for radiographs, giving him a contrast agent was too risky. Therefore, we reached out to our friends at Blue Pearl Veterinary Hospital for help with advanced diagnostics. 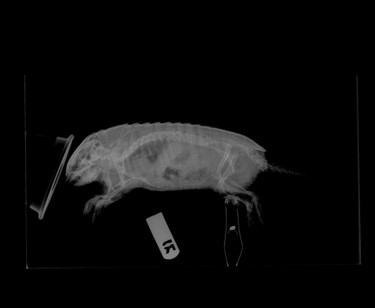 Diego travelled to Blue Pearl Veterinary Hospital for a computed tomography (CT) scan. A CT scan combines a series of x-ray images taken from different angles to form an image of soft tissue structures. With a CT scan, we were able to map out all of Diego’s internal organs to get a clearer picture of what was going on. The problem was identified in his esophagus, where it was much more distended than it should have been. The rest of his organs appeared to be okay. This gave us a diagnosis of megaesophagus and a new challenge: how to manage it. 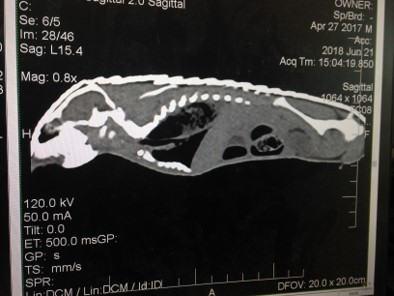 Megaesophagus results in a flaccid esophagus, preventing animals from being able to appropriately swallow food. Animals with this condition need to be fed at an elevation, meaning they need to be standing when eating so that gravity can help get food down into the stomach. Directly after eating, they need to stay elevated for approximately 10-15 minutes to allow the food to move through the GI tract. The first step to managing any animal with a chronic condition such as Diego’s is having caring zookeepers who understand that animal’s behavior and are passionate about creating methods that work for the individual.

Zookeeper Tara has worked very hard to figure out a feeding method that works perfectly for Diego. She holds him in a standing position to hand feed him then swaddles him in a blanket and places in a pouch that hangs around her waist. This way, she can keep him upright and monitor him for any regurgitation. Diego often uses this opportunity to take a post-meal nap while he is in the pouch!

Diego has been doing very well since his diagnosis. He has gained weight and has not had any episodes of regurgitation after starting his new feeding regimen. He also receives a medication for intestinal motility to assist with movement of the food through his GI tract. His diagnosis was a collaborative effort and the animals in our care deserve nothing less than the best. We are incredibly fortunate to have so many caring individuals that work together for our happy, healthy armadillo!