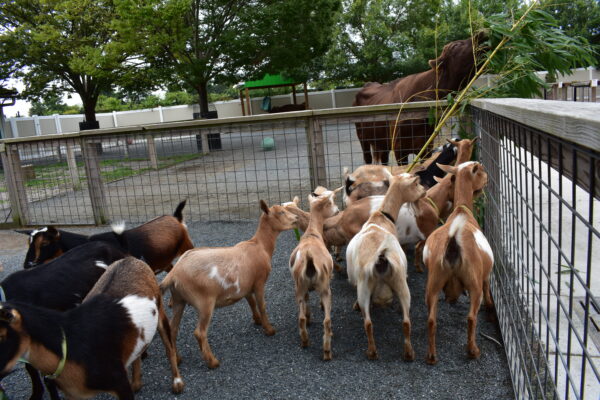 Chef Yohn was back at it again for this month’s Animeals, and this time he had some help from his assistant, Sous Chef James. Yesterday was World Goat Day, so what better recipients of a frosty, delicious treat than the Zoo’s herd of 20 goat kids and moms.

Sous Chef James took the lead on this unique treat for the goats, and put in more than one day’s work to accomplish the end results. He mixed food coloring with water and poured the liquid into a five-gallon bucket, only filling the bucket a third of the way. Once that layer froze overnight, he’d repeat the same steps with different food coloring and also added different foods for the goats to munch on. 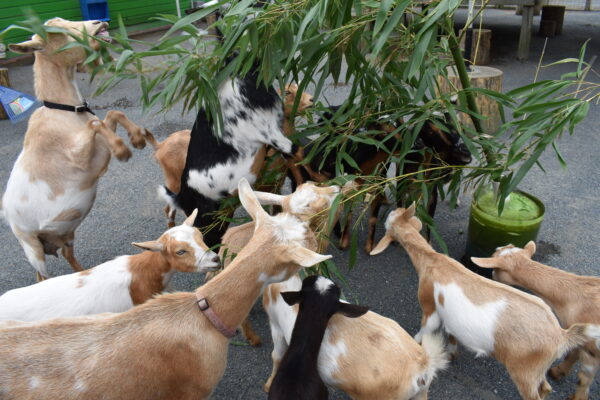 Sous Chef James used two heads of cabbage, sweet potato shavings, and corn kernels to add flair to each layer of the frozen treats. For the last layer, he set a hollow PVC pipe partially into the water and vegetable mix. Once the pipe was frozen inside of the ice, the open end was filled with tasty stalks of bamboo, perfect for munching on.

Chef Yohn delivered the ice buckets early in the morning, just in time to feed the hungry goats who were already begging their Keepers for breakfast. With temperatures nearly reaching the mid-80s by the time the Zoo opened, the goats were already licking their lips in anticipation for the treats to come. Before Yohn could remove the ice from the buckets and stuff the hollow PVC with bamboo, the goats were swarming at his feet. He placed one block on either end of the exhibit, and the goats eagerly began munching away. Judy the cow also feasted on the branches of bamboo she could reach from her exhibit. 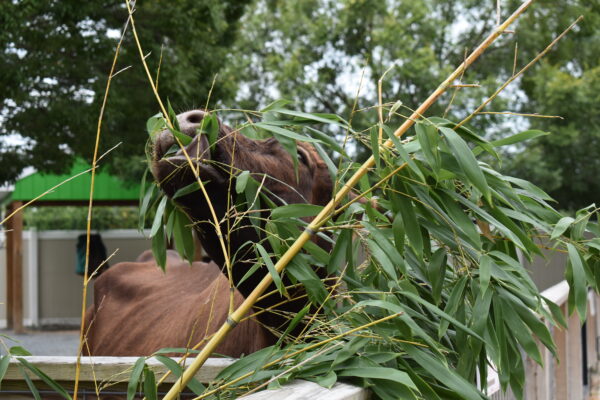 Goats will typically eat anything green, so the bamboo was an immediate treat for them. Bailey was the first to eat the experimental treat, and others followed suit. As the ice began to melt, new surprises emerged from the blocks, and some of the goats licked and munched their way to retrieve the corn and cabbage leaves. Others weren’t interested in the brightly-colored snack, but instead opted for fresh hay from Keepers. 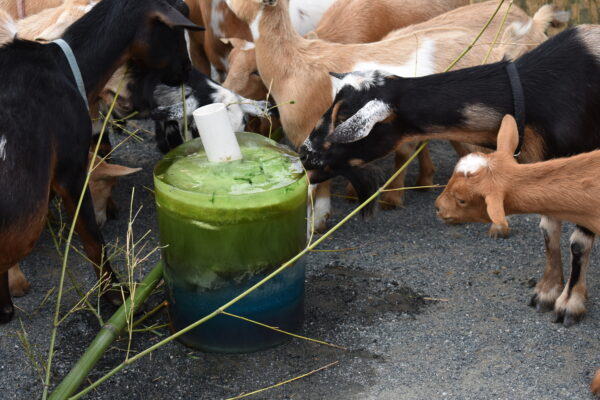 As the morning went on and the temperature increased, the ice melted, giving way to new treats for the goats to find. Overall, they enjoyed their World Goat Day Animeals, and staff and guests also enjoyed watching them eat it!

Check back next month to see which animal ambassador will feast on her Animeals!