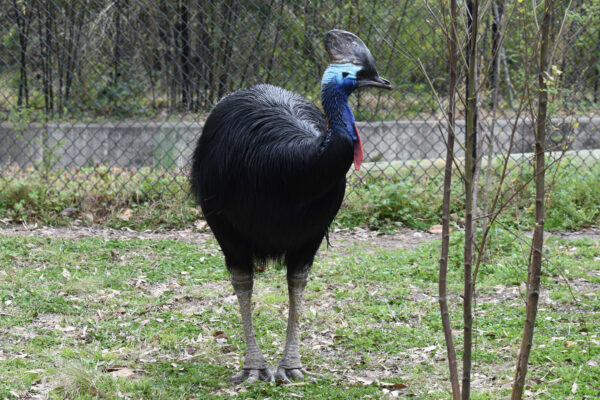 Tales of the TailsShould you be Wary of the Cassowary?

To most people, cassowaries resemble the combination of a dinosaur, a turkey and an emu. Cassowaries have a black feathered body, a large helmet on their head known as a casque, a long bright red wattle hanging from their neck, and large talons on their three toes. They also have distinct blue skin that covers not just their head, but their entire body.

Cassowaries are closely related to emu and distantly related to the ostrich, all of which are ratites. Ratites are large-bodied terrestrial birds that have flat breastbones, making them unable to fly. The cassowary is the second-largest bird in the world, depending on weight and height. The ostrich outweighs and towers over the cassowary, making it the largest bird in the world. Emus are taller than cassowaries, however, they weigh less, which is why there is a discrepancy as to whether the emu or the cassowary is the second largest bird.

Cassowaries are solitary animals until they begin to breed around the age of three or four. Once a pair breeds and the female lays up to five eggs, she abandons the clutch forever, leaving it with her male mate to incubate and take care of. After 50 days of incubation, the three to six inch, one-pound bright green eggs will hatch into tiny black and yellow-striped chicks that will need protection and nurturing by Dad for up to a year.

Adult cassowaries are known to be very aggressive, especially when a male is guarding a nest. This behemoth of the bird world has extremely long and sharp six-inch talons that they use against predators.

Although the cassowary is very territorial, these unique-looking birds need our help. The flightless bird is listed as vulnerable by the International Union for Conservation of Nature (IUCN) due to being a ratite, which makes it an easy target for exploitation by humans for its meat, eggs and feathers. The bird’s native tropical rainforest habitat in New Guinea and Australia is also depleting due to deforestation.

There are three species of cassowary: the Northern cassowary, Southern cassowary and Dwarf cassowary. All three species play an important role in the ecosystem as seed-dispersers. Cassowaries digest the flesh of fruit, but not the seeds, ultimately passing them and dispersing them onto the rainforest floor where they can grow into new trees. Their diet mainly consists of a wide variety of fruits, but they have also been known to eat fungi, insects, fish, frogs, small mammals and carrion.

The Virginia Zoo has three Southern cassowaries, the largest species with less than 20,000 individuals left in the wild. Two cassowaries can be seen along the Asia – Trail of the Tiger, and the third cassowary is located within the Australia Walkabout. 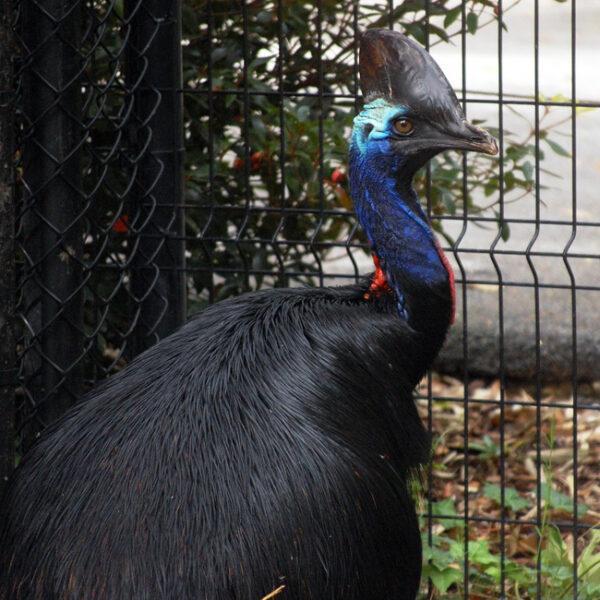 Boris, a male cassowary, can be seen from the visitor pathway in the Australia Walkabout, but isn’t on exhibit with the other Walkabout residents. Boris is estimated to be 21 years old and came to the Virginia Zoo from the Dallas Zoo in 2010. He weighs around 123 pounds and enjoys resting in his yard. His favorite type of enrichment is finding treats in the hanging feeder, especially grapes.

In the Asia exhibit, Hallagar was hatched on June 11, 2013 at the Virginia Zoo. Hallagar is the offspring of Boris, the Zoo’s other male cassowary. He also enjoys finding grapes in the hanging feeder for enrichment, and spends most of his time exploring his yard and napping. Weighing in at 123 pounds, Hallagar and the other cassowaries all have a special diet consisting of apple jungle pellets and a mix of fruits and vegetables.

Elgie is the Zoo’s only female cassowary. She was hatched on May 1, 2013 and arrived at the Virginia Zoo in 2014 from the Natural Bridge Zoo in Virginia. Elgie weighs 128 pounds and is almost six feet tall – taller than both of the male cassowaries at the Zoo. She enjoys eating grapes and hard-boiled eggs, and enjoys being in the water. When she isn’t being misted with a water hose, Keepers often find her laying in her water bowl and watching guests walk by. 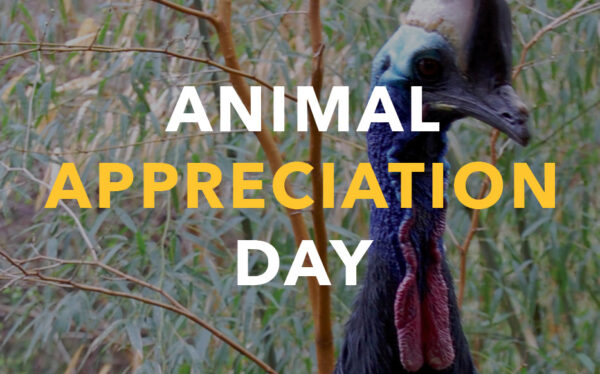 Symbolically adopt our Cassowaries through July 25 at the $30 level and you’ll be entered to win a Sneak Peek Behind the Scenes encounter with the cassowaries for you and one guest. Plus, your purchase will directly benefit the Rainforest Trust Australia, who is working to restore cassowary habitats in the Daintree Lowland Rainforest in Australia. For more info on Cassowary or to zoodopt these ancient-looking animals, click here.