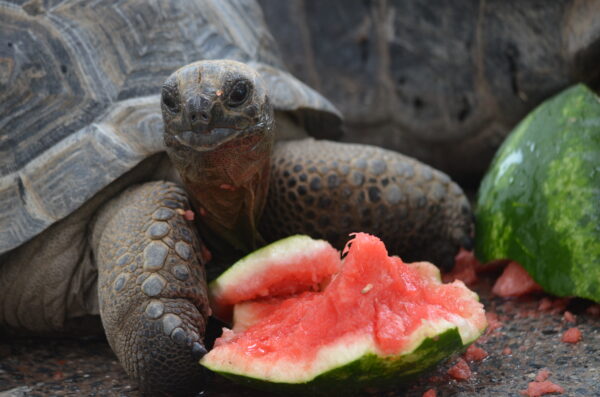 Tales of the TailsAldabra Cadabra

They’re hairless, heavy and never in a hurry; gregarious and gargantuan. They’re educational and ectothermic. They’re reptiles and are the second largest tortoise species in the world. They’re Aldabra tortoises! 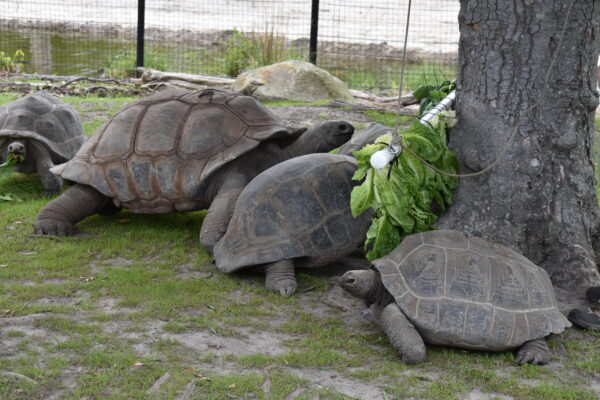 Where are Aldabra tortoises from? These gentle giants can be found on Aldabra Island, part of the Seychelles northeast of Madagascar, in the Indian Ocean. The species’ habitat includes scrub and mangrove swamps with heavy vegetation, as well as grassy plains.

What do they eat? Aldabra tortoises have been known to change their habitats by eating large amounts of the vegetation and even knocking over plants and small trees while trying to reach their leaves, creating new pathways for other animals. They also disperse seeds back into the environment after they travel through their digestive system, providing food for other animals. Their diet typically consists of grasses, woody shrubs and plants, but some will eat other dead animals to survive.

The tortoises here at the Zoo are fed a diet developed to help keep them healthy, with a mix of produce, browse, a commercial tortoise diet, and grass hay. Although it might be tempting for visitors to try and feed them vegetation found near their exhibit, it is safer for both you and the tortoises to just observe and not touch or try to feed them – unless you are on one of our Behind-the-Scenes Tours with the help from one of the reptile keepers! 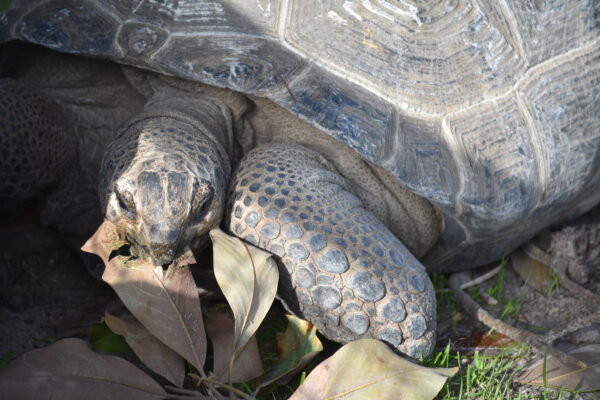 What about Aldabra tortoise reproduction? Aldabras are one of the more social tortoise species. Males will fight with one another for breeding rights and territory, and then the dominant male will breed with the females. The breeding season extends from February to May and the females carry the eggs for about ten weeks, after which they are buried in the ground. A clutch size is nine to 25 eggs, which are the size of tennis balls, but not all of them develop and hatch. At this point, none of the Virginia Zoo’s tortoises have laid eggs.

When are they most active? Aldabras sleep more than half of the day. They will often wallow in mud to protect themselves against mosquitoes, then sleep for an average of 18 hours in a 24-hour period, although this amount varies among individuals. 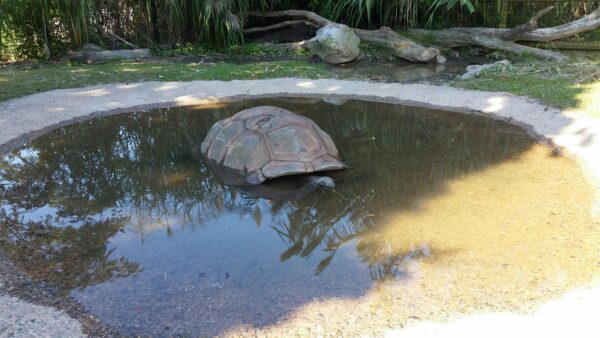 Who are the Virginia Zoo’s Aldabra tortoises? The Virginia Zoo has five Aldabras: males AJ and Jackson, and females Dottie, Lyn St. James and Bubbles. They all arrived in 2010 and can be found in their yard just outside of the Africa- Okavango Delta.

AJ is the oldest living animal at the Zoo. Although his exact age is unknown, Keepers estimate he is around 85 years old. AJ hatched in the Seychelles Islands, and then lived at the Indianapolis Zoo before arriving in Virginia. AJ likes to eat bright foods and prefers to sink into the mud any chance he can get, and is very territorial about his mud wallow. He weighs 507 pounds and is also the largest of the five tortoises.

Jackson is the smaller of the two males and just turned 12 years old on May 3. Jackson was hatched at the Tulsa Zoo. He also prefers bright foods and enjoys climbing over the rocks and logs in the tortoise yard. Even though Jackson is 12, he is not old enough to breed as Aldabra tortoises usually reach maturity around the age of 25. Jackson weighs 160 pounds, making him the second largest of the creep, or group of tortoises.

Lyn St. James is the oldest of three females, and Keepers estimate she is around 78 years old, and weighs 146 pounds. She was hatched in the Seychelles and then lived at the Indianapolis Zoo before coming to the Virginia Zoo. Lyn enjoys interacting with her Keepers, but tends to only do so inside of the tortoise barn. Keepers say she is almost always the first to head outside when the door opens and can often be seen napping more than anything else.

Bubbles is 12 years old and weighs 117 pounds. She was hatched at the Tulsa Zoo on February 5, 2006, before coming to the Virginia Zoo in 2009. Keepers say Bubbles is the first in line at feeding time and when she isn’t eating, she spends her time napping. She prefers to be inside the tortoise barn instead of in the yard.

Even though they are one of the largest tortoise species in the world, Aldabra tortoises are vulnerable to extinction due to hunting, habitat loss, the illegal pet trade and introduced predatory species that will eat tortoise eggs and babies. Conservation organizations such as the Turtle Survival Alliance have practices in place to help turtle and tortoise species from going extinct. The Virginia Zoo is proud to work with the TSA and donates funds to the organization every year.

Be sure to come see our Aldabra tortoises creep around their exhibit, especially on May 23: World Turtle Day! You can even schedule a Behind-the-Scenes Tour to meet the Tortoise Five in person!