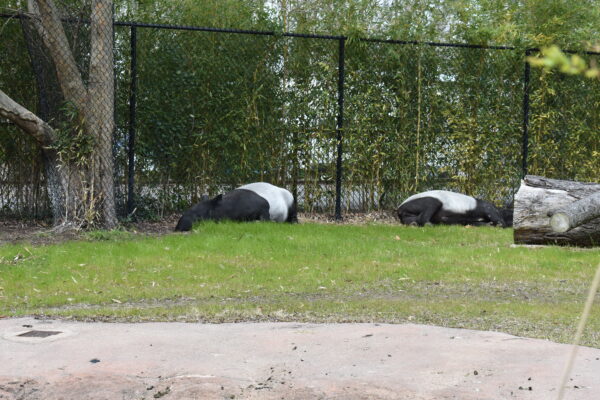 What animal has hooves, a long snout and a large, round body? Your first guess might be an elephant, hippo or even an anteater, but for the animal we’re featuring this month, all of those answers are wrong. This month’s Tales of the Tails blog is about a unique mammal from Asia and tropical South America known as a tapir. 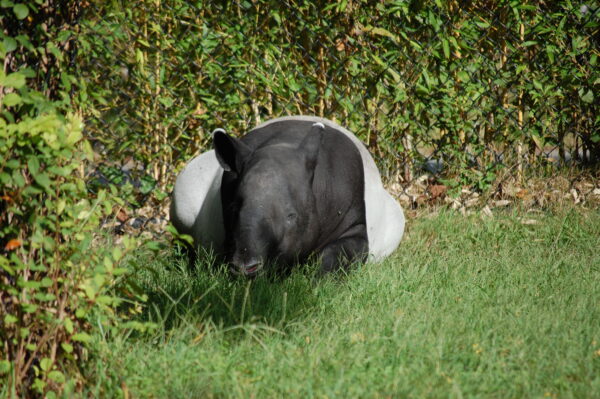 Tapirs can typically be found in grasslands and tropical rainforests, or areas where the environment is dominantly moist. They are related to rhinos and horses, and are easily recognizable by their long snout, which is actually a prehensile nose. They use their long nose to wiggle food into their mouth and can also use it as a snorkel when doing one of their favorite things: swimming! 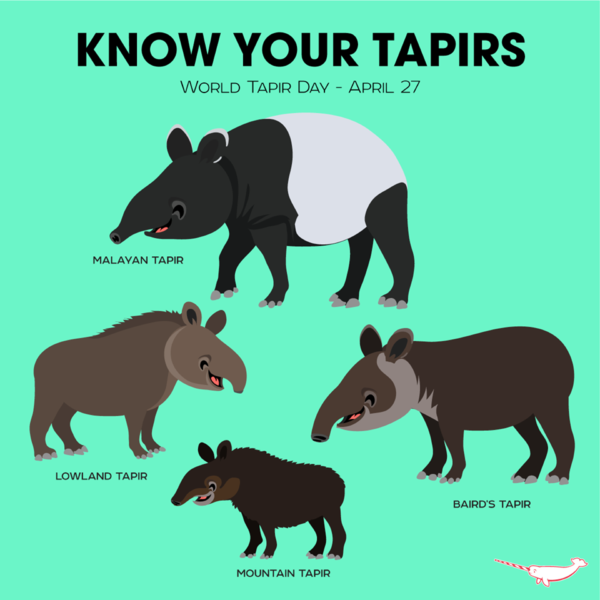 The Lowland tapir is considered vulnerable to extinction, while the other three species are endangered. Main reasons for the decline in tapir populations include deforestation and degradation of habitats, as well as hunting and poaching for their meat or hides.

The Virginia Zoo has two Malayan tapirs. Malayan tapirs are the largest species of tapir, and are only found in Malaysia, Indonesia and Thailand. They are mostly black with a large white patch on their back and torso, which is believed to help them camouflage from their main predator, tigers.

Even though the Virginia Zoo only has Malayan tapirs, the Zoo supports all tapir species’ conservation by donating to the Tapir Specialist Group and the Lowland Tapir Conservation Initiative (LTCI). Virginia Zoo Asia Keeper Chelsea Swain also worked with the LTCI last summer to conduct research on wild tapirs in Brazil.

The Virginia Zoo’s tapirs are a part of a Species Survival Plan® established by the Association for Zoos and Aquariums. This program oversees and manages species’ population in zoos by monitoring breeding to prevent overpopulation and inbreeding. The SSP also ensures the species’ survival in the wild through conservation efforts such as programs to combat poaching and the illegal wildlife trade. Maximizing the genetic diversity of the species through breeding is also a priority of the SSP, which is why animals are often transferred to different zoos.

Haddie and Rosco are the Zoo’s two adult tapirs. Their shared exhibit is found in Asia – Trail of the Tiger just past the gibbon and otter enclosure, and across from the moon bear exhibit. They can be found foraging for food and taking dips in their pool during the morning and late afternoon hours, but spend a lot of their time napping in the shadiest part of the exhibit. The pair can also be heard squealing or whistling at each other to communicate.

Haddie is the Zoo’s seven-year-old female Malayan tapir. She was born on May 10 at the Sedgwick County Zoo in Kansas. Before coming to the Virginia Zoo in September 2016, Haddie lived at the Henry Vilas Zoo in Wisconsin. She weighs more than 680 pounds and stands just under four feet tall.

Haddie eats a regular diet consisting of herbivore grain, hay, produce and veggies, but enjoys eating bamboo for enrichment. She can be regularly seen napping, but also enjoys swimming in the pool when it’s warm outside. Keepers say she is an excellent swimmer and can hold her breath for several minutes while sinking to the bottom of the pool and walking on the bottom like a hippo!

Rosco is the Zoo’s male Malayan tapir. Rosco was born on October 9, 2014, at the Center for Conservation of Tropical Ungulates in Florida. He was transferred to the Virginia Zoo in June 2017. Rosco eats the same types of food as Haddie, but prefers baby food and oranges for enrichment. Rosco weighs close to 600 pounds and is between three and four feet tall.

When Rosco isn’t napping, eating or swimming, he likes to whistle (loud high-pitched) and chuck when he and Haddie are interested in each other and when it’s feeding time. When it is close to feeding time and the tapirs hear their Keepers, they will whistle at them for food. The pair both also love being scratched. During training sessions, a scratch with a rake or brush is often better than produce as a reward.

Every year, April 27th is World Tapir Day, a day to celebrate and learn about the different species and how to protect them in the wild. This year, The Virginia Zoo is hosting a celebration of tapirs for an Animal Appreciation Day, April 27, from 11:30 am to 1:30 pm! Any person who zoodopts the tapirs before or on April 27 will be entered to win a Sneak Peek Behind-the-Scenes tour with our very own Haddie and Rosco! This special package is $50 and includes:

Join us for World Tapir Day, and don’t forget to say hello to the tapirs on your next visit to the Zoo!