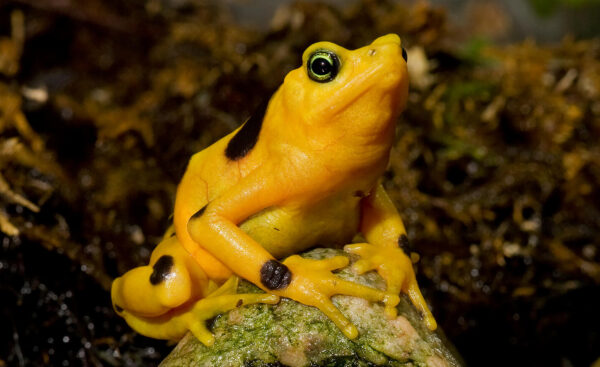 Tales of the TailsLeaps and Bounds

Hop on in for another great edition of Tales of the Tails, the blog series that features one of the many species of animals you can find right here at the Virginia Zoo. This month we’re a tad excited to be featuring some little amphibians for World Frog Day, which is celebrated today, and annually on March 20!

This species will make its Virginia Zoo debut in the World of Reptiles this summer, but is currently behind-the-scenes until opening day. Without further ado, we present the Panamanian golden frog!

The Panamanian golden frog, Atelopus zeteki, is found in the tropical cloud forests of Panama. This species of frog also earned its name from the vibrant gold-yellow color of its skin, which aids in warning predators of its toxicity. These frogs also have black spots on their skin, which are as unique as a human’s fingerprint.

The skin of Panamanian golden frogs secretes a potent neurotoxin known as zetekitoxin. This toxin is unique to this species and acts as a defense mechanism to harm any potential predators by causing paralysis or death.

Panamanian golden frogs are relatively small in size, only growing 1.5 inches long for males and 2 inches for females. Despite their small size, they have a big appetite. Small arthropods such as flightless fruit flies, small crickets, and springtail bugs are on the adult frogs’ typical menu, while the tadpoles graze on algae on rocks underwater.

Golden frogs typically live a solitary life, but will move near other frogs to mate. The male frogs of this species live near streams year-round, often perched on moss-covered rocks. The females tend to live further from the water on the forest floor during the rainy season, and return to streams to mate with male frogs during the dry season. The sound of the water is so loud that the male’s mating call is often unheard, so he will make a waving motion to signal his location to other frogs. The wave will warn males to stay away while enticing the females to hop on over.

These frogs can lay between 200 – 600 eggs at a time. The eggs will hatch into tadpoles after less than a week, then they will develop into juvenile froglets after around four months. The frogs don’t acquire their golden color or full toxicity until they are adults. The average lifespan for a Panamanian golden frog is nine years in captivity, and the lifespan of a wild golden frog is unknown.

There are an estimated 6,000 Panamanian golden frogs left in the world. The species is listed as critically endangered according to the International Union for Conservation, and it is widely believed that the species is extinct in parts or most of its regions in the wild.

The golden frog population has declined by 80 percent in the last decade for one main reason: Amphibian chytrid fungus. This fungus thrives near mountain streams and is the source of the disease Chytridiomycosis, which causes the keratin in a frog’s skin to thicken. Frogs and other amphibians breathe, drink and absorb nutrients through their skin, not their mouths, so any thickening of the skin inhibits the animal from obtaining minerals such as salt, potassium and electrolytes. Ultimately, the disease suffocates or dehydrates the host’s body, resulting in death. Scientists have called chytrid fungus the worst infectious disease ever recorded among vertebrates in terms of the number of species impacted, as the fungus can infect almost every species of amphibian, not just frogs, in the world. 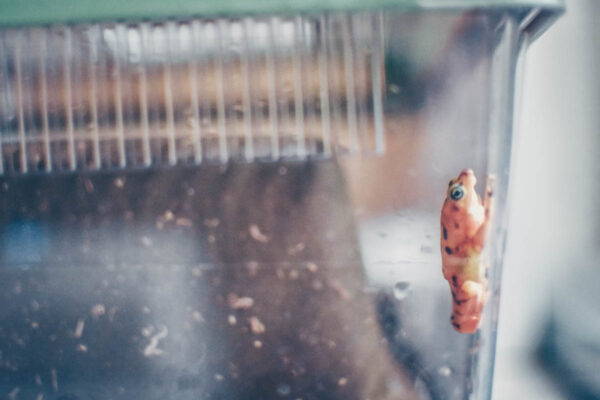 Sadly, there is no cure for chytrid fungus, but conservationists are hopeful for the species’ future. Efforts to protect the species’ native habitats in Panama and conservation programs, such as captive breeding programs and a Species Survival Plan, exist to help bring the frogs back from the brink of a massive extinction. The Maryland Zoo was the first zoo to successfully breed the frogs in captivity and have paved the way for new individuals in zoos across the country. 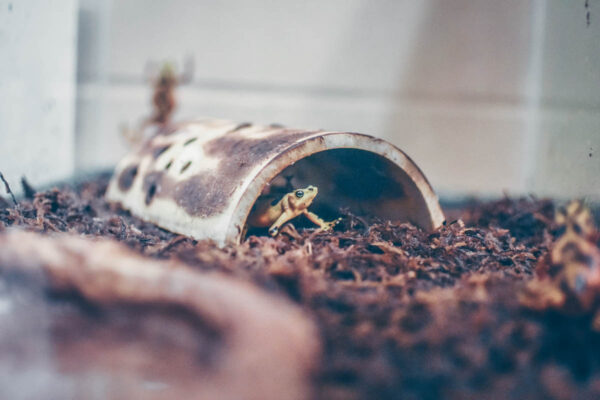 The frogs will be visible in the World of Reptiles, but guests will also be able to potentially see the growth of the amphibians through their life cycle from a tadpole to adult. There will be at least one enclosure in the building’s new Frog Lab so visitors will be able to see these frogs up close. While Keepers will be attempting to breed the frogs in this lab, the eggs are sensitive to light and may not be easily visible at all times.

The Panamanian golden frog should be on your list of must-see animals on your visit to the Zoo this summer. Even though they aren’t on exhibit yet, you can still admire them in spirit and donate to help save their species from extinction.