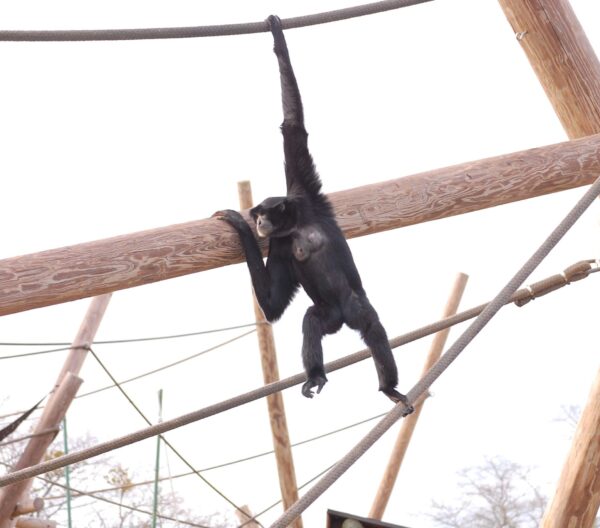 Lola, the Virginia Zoo’s five-and-a-half-year-old female siamang has reached maturity and is ready to leave the family group.

A siamang family group consists of one adult male and one adult female, along with two or three offspring. Hitam and Bali, the Zoo’s adult female and male siamangs, became parents in 2012 when Lola was born. Then in 2015 a male, Gunter, was born. While adults typically pair for life, young siamangs usually stay with their family for six to eight years, then venture out on their own and eventually start their own family group. Lola is almost six years old, so it’s not uncommon of for siamangs at this age to leave the group.

Over the past several months Lola’s Keepers have observed noticeable changes in the social structure of the siamang family. This led the Animal Care Staff to conclude Lola was likely ready to leave her family group, so they started looking at other opportunities for Lola. Keepers consulted with a Species Survival Plan (SSP) Coordinator through the Association of Zoos & Aquariums to find an approach to managing the group without Lola leaving right away. The animals were separated in different enclosures, but still had visual and tactile access. With this change in how the group was managed, Lola started exhibiting more relaxed and normal behaviors. It also allowed for the family to interact at their choosing, but also allowed for some alone time when needed.

However, this was not a permanent solution. As Lola continued to mature, it was clear that she would need to be moved to another zoological facility for the opportunity to build social connections with other animals. Based on guidance from the SSP, Lola will be moving to another AZA-accredited facility soon so that she can have the opportunity to make new relationships with other gibbons. Ultimately, down the road she may be paired with another male siamang, as designated by the SSP, and one day will hopefully start a family of her own.

Be sure to stop by Siamang Island or take a peek into their dayroom to say your goodbyes to Lola.