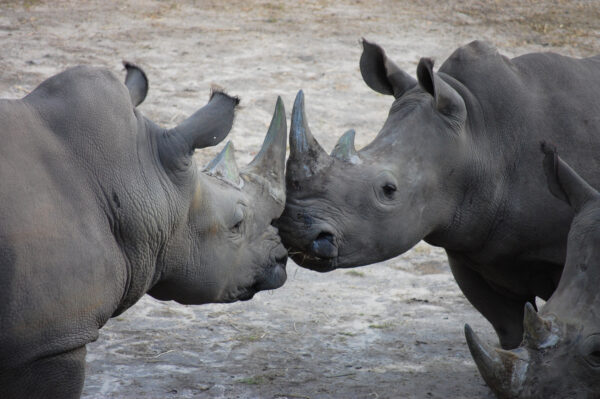 In case you’ve missed it, the Virginia Zoo now has three Southern White rhinos on exhibit! Sisters Bora and Zina were joined by an older male named Sibindi in November, and all three rhinos were recently introduced to each other.

Bora and Zina arrived at the Zoo in April 2017, have already been through quarantine and have been out on exhibit together since the beginning of summer. Once Sibindi arrived, he was placed in routine quarantine for 30 days before finally being introduced to the girls.

Since all of the rhinos are housed together, the rhinos were able to smell each other from a distance but were not able to immediately interact. Sibindi was also given time access to both the holding yard and exhibit to become acclimated with the new surroundings before officially meeting the Bora and Zina.

Keepers don’t have any specific expectations for how introductions will go between any of the animals, but rhino introductions can involve sparring, chasing, running, eating together, or even avoiding each other. Rhinos will also make noises such as grunting or bellows to communicate with the other rhinos. Keeper staff are always prepared for any situation and were ready to separate the rhinos if necessary.

Once it was time to introduce the rhinos to each other, Keepers separated Sibindi into the smaller holding yard and Bora and Zina into the larger exhibit. The rhinos interacted through the fence by smelling and rubbing their faces against each other, followed by an occasional grunt and a sprint around the exhibit. According to Keepers, the first interaction went very well and would result in an official introduction after a few days of close monitoring.

Keepers decided it was time to fully introduce the rhinos in the larger exhibit yard. They set up small piles of hay around the exhibit and gave Bora and Zina access to the yard first. The girls made their way to the food while Sibindi was let out and made his way slowly toward them.

After a few minutes of slowly approaching and smelling each other, all three ended up munching on a pile of hay together. There was some bluff charging from the females toward Sibindi, but overall all it was a fairly calm introduction. The trio stayed on exhibit for most of the day under the watchful eye of the Africa Keepers.

Weather permitting, the trio go out on exhibit every day together and Keeper staff monitor them intermittently as they do the rest of the animals. The recent snow storm prevented the rhinos from going outside on exhibit the first couple of days, so they stayed inside in their heated barn. While inside, the rhinos can interact with each other but are separated into different stalls.

Our new crash, or group of rhinos, is still getting to know each other, but Keepers are pleased with their behaviors. If you’re wondering if the Zoo could see rhino calves in the future, there is no way to guarantee or predict breeding success with any animal, and it is ultimately up to the rhinos themselves. While Sibindi has successfully bred with other females in the past, Bora and Zina are just coming into breeding age.

Now that the rhinos are all settled in, the Virginia Zoo is pleased to offer Behind-the-Scenes Rhino Tours again! Visitors have the opportunity to meet one or more of our three White rhinos up close, while learning more about Bora, Zina and Sibindi from their Zoo Keepers. Tours could be held inside their overnight barn or behind the scenes outdoors, depending on the weather. Tours start at $150 and reservations begin in February.