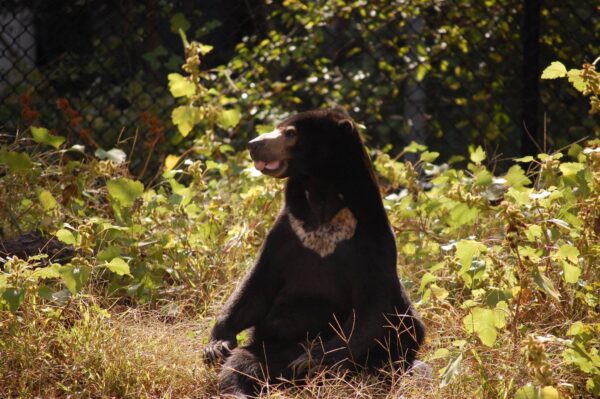 Tales of the TailsBeary Cool Animals

The Virginia Zoo has two pairs of bears, moon bear brothers Thai and Chai, and sun bear couple Palu and Suntil. For this edition of Tales of the Tails, we have everything you need to know about the elusive pair of Malayan sun bears living at the Zoo.

Sun bears are native to eastern India and southern China, specifically in areas such as Indonesia, Malaysia and Thailand. The species earned its name from the yellowish-white patch on their chest, which resembles a rising sun.

Sun bears have long claws for digging in the dirt and logs, and their nearly 10-inch-long tongues help reach every tasty insect they can dig up. Sun bears are also known to feed on fruits, small mammals and birds, and will occasionally treat themselves to honey from beehives.

Sun bears are excellent climbers and spend most of their time in trees. The species is the smallest of the eight existing bear species in the world, growing to be no more than five feet in length and weigh up to 150 pounds. Their small size makes them agile climbers and allows them to easily move through trees.

In the wild, sun bears can live to be 25 years old and more than 30 years under human care. The species is listed as Vulnerable to extinction due to habitat loss and degradation from deforestation, poaching for the use of their body parts for medicinal purposes, and the illegal pet trade.

There is not currently a Species Survival Program (SSP) for sun bears, but the Virginia Zoo works with the Association of Zoos & Aquarium’s Bear Taxon Advisory Group on any related bear management needs.

Palu is a nine-year-old male Sun bear. He was born on October 25, 2008 at the San Diego Zoo. The best place to spot Palu in his exhibit is napping in a tree or foraging for snacks. He eats around one quart of fruits and veggies, and a little over one pound omnivore chow a day. On Sundays, Palu also receives beef shank.

For enrichment, Palu enjoys things like boxes, paper bags, mealworms hidden in special feeders, coconuts, bones and moon bear scent. Palu shows the most interest in coconuts and bones. He can be seen rubbing the coconut’s scent on his head using his paws, and will break bones using rocks to retrieve the bone marrow from the inside.

Palu shares his exhibit with Suntil, a 19-year-old female sun bear. Suntil came from Malaysia and lived at the Woodland Park Zoo in Seattle, Washington before being paired with Palu at the Virginia Zoo in 2012. Suntil can be found napping in her favorite tree located on the left side of the exhibit, or lounging in the sun. When she isn’t napping, Suntil can be seen digging for bugs or climbing the trees in the yard.

Suntil has roughly the same diet as Palu, but enjoys different enrichment. Her favorite items are large black tubs and bones. Suntil will drag the tub around the exhibit until she finds the perfect spot and then will climb in and nap or relax! She will also lay on her back, hold a bone with all four paws and lick the bone marrow out for enrichment.

Although the pair have been together for six years, Suntil prefers to be on her own unless it’s time to mate! Suntil and Palu have never produced cubs, and sun bears tend to go through a Pseudopregnancy, or a false pregnancy, if they do not become pregnant.  Suntil will display denning behavior occasionally throughout the year even if she is not pregnant.

Suntil and Palu can be found in their exhibit in Asia – Trail of the Tiger, but guests can also book an up-close behind-the-scenes encounter and meet one of them in person!