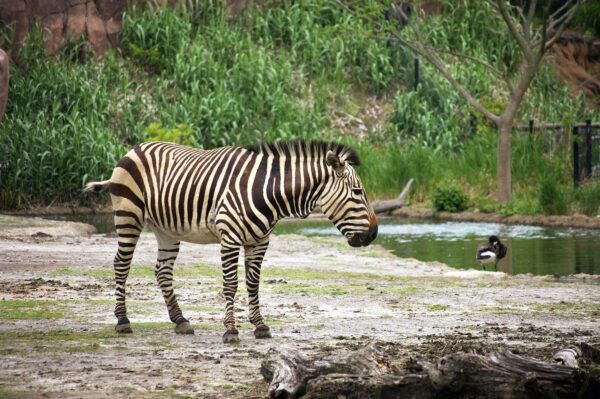 Tales of the TailsNot All Black and White

What looks like a horse, lives in Africa and has black and white stripes? A zebra, of course! Known as one of the more easily recognizable creatures in the Animal Kingdom, zebras are actually much more than the color (and pattern) of their skin.

There are three species of zebra and seven subspecies: 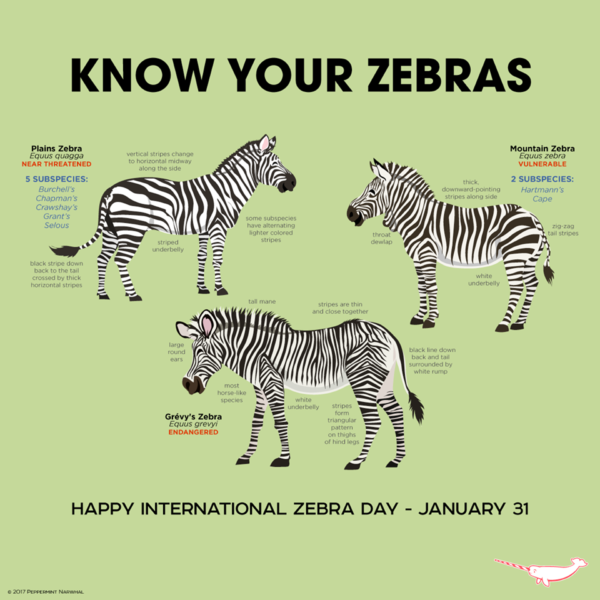 All zebra species are threatened or vulnerable to extinction. The biggest threats to zebras are habitat loss due to farming and competition for water with livestock. Zebras are also poached for their unique skins.

Zebras are completely different than other animals, and their stripes are one of the many reasons they are so unique. Like human fingerprints, no two zebras’ stripes are the same. Most zebras have black stripes, but some can be born with white stripes, meaning most of their skin is black instead of white. A zebra’s stripes actually go all the way to the skin and would still be prevalent even if the zebra were to have no hair. 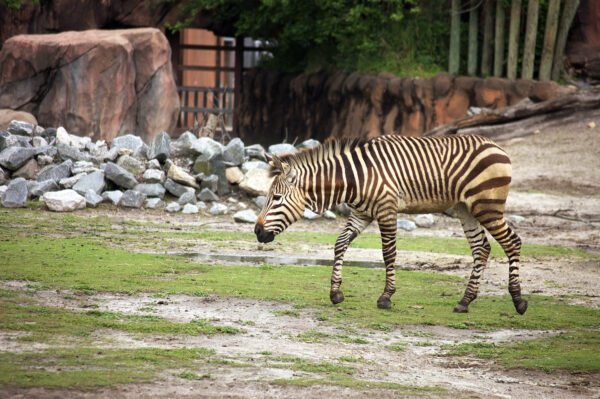 A zebra’s stripes not only make it unique from others, but they serve a larger purpose: protection. When a group of zebras, also known as a dazzle, are together, their combined stripes create a visual illusion that makes it hard for predators to pick out a single zebra to prey on. A zebra’s main predator, the lion, is colorblind, so when zebras stand in tall grass, their stripes can also help camouflage themselves in the foliage.

Other animals can prey on zebras, such as hyenas, cheetahs and even the occasional crocodile. Zebras, on the other hand, are not predatory animals. They are herbivores and their diet primarily consists of grass, but also includes leaves and bark.

At the Virginia Zoo, the zebras are fed a diet that includes a pellet grain, Timothy hay, a small amount of sweet feed, browse and a variety of produce including carrots.

Guests can easily spot the Zoo’s three Hartmann’s Mountain zebras directly across from the Zoo’s Africa Village Cafe. Zack, the Zoo’s only male zebra, was born on February 11, 2011, making him seven years old. Before coming to the Virginia Zoo in 2012, Zack was at the Fossil Rim Wildlife Center in Texas.

Zack enjoys playing with the other zebras, and can often be seen chasing the others around the exhibit. He seems to prefer eating sweet feed and carrots, but will also take interest in browse for enrichment. A fun fact about him is that he has sired two zebra foals in his lifetime- both with Abby.

Abby is one of two female zebras at the Virginia Zoo. Abby was born on May 1, 2001 at the Canyon Colorado Equid Sanctuary. Before coming to the Virginia Zoo in 2013, Abby lived at the San Diego Zoo Safari Park in California. If you see a zebra rolling around in the dirt or mud, chances are it’s Abby or Rose. Besides rolling around, Abby seems to enjoy eating carrots and sweet feed for enrichment. Abby has given birth to three foals. She is the most dominant member of the herd but has the shortest tail.

The last of the Zoo’s three zebras is Rose. She was born on April 17, 2004, making her 14 years old. She came to the Virginia Zoo from Busch Gardens Tampa Bay in 2012. Rose also enjoys rolling around in the dirt or mud. Her favorite food appears to be carrots and sweet feed, but she will eat almost any produce given to her.

January 31st is International Zebra Day! The next time you’re visiting the Zoo’s Africa – Okavango Delta, earn your stripes by visiting the watusi and zebra exhibit, and see if you can tell the difference between Zack, Abby and Rose!