Chelsea Swain is a Virginia Zoo Asia Zoo Keeper. She graduated from Christopher Newport University and then interned at The Wildlife Center of Virginia, as well as the Virginia Zoo. She has volunteered at the Virginia Aquarium on the Dive Team and Stranding Team, and at the Smithsonian Conservation Biology Institute with cheetahs. Before becoming a full-time Zoo Keeper in 2015, Chelsea worked as an educator at the Virginia Zoo, and part-time keeper and Bird of Prey trainer at Busch Gardens. Chelsea most recently traveled to Brazil for work to learn about Lowland tapir conservation and research, and has a lot to discuss about her life-changing trip!

Tell us about your recent conservation trip.

I went to the Pantanal in Brazil with the Lowland Tapir Conservation Initiative. The Pantanal is a floodplain and one of the world’s largest freshwater wetlands. It took most of the day to get into the Pantanal where the research was conducted. The land provided completely pristine conditions for wildlife, hardly touched by man. I saw nature in its purest form.

How long was your trip and what did you do?

I was in Brazil from August 14 to September 1, plus a few extra days for traveling to and from the country. In Pantanal, every day was an adventure beginning at sun-up. We checked box traps, observed and participated in medical procedures on wild tapirs, used radio collars to track tapir activity, and set up and monitored camera traps. I also had the opportunity to see other wildlife in the Pantanal that one could only see on a nature documentary, including wild capybaras, Caiman crocodiles, Dung beetles, parrots and coati.

How did you hear about the trip?

Who is Patrícia Medici?

Tell us about the background of the project.

The Lowland Tapir Conservation Initiative was created and led by Dr. Medici since 1996 through an organization called IPÊ (Instituto de Pesquisas Ecológicas). This organization studies the basic ecology, population demography, population biology, epidemiology, genetics, and habitat use of tapirs, and also studies the effects of habitat fragmentation, as well as promotion of community involvement through sustainable development, environmental education and habitat restoration efforts. The Initiative project involves many people, including the local community, and others from around the world like scientists, conservationists and veterinarians. The community and millions of its natural inhabitants (including Lowland tapirs) benefit from this organization. The zoo community also benefits from this project as well. Dr. Medici is a very strong believer in sharing her information and is very involved in the networking world of tapirs.

What drew you to participating in and helping with the project?

I LOVE tapirs. We have Malayan tapirs here at the Virginia Zoo. They are some of the most amazing animals. Known as the “gardeners of the forest,” they are critical to the ecosystem they live in and how it is formed. They are also an umbrella species, meaning that by protecting them, it will help protect all of the other species they share the same habitat with.

Tapir getting fitted with a collar during an exam.

What is the main goal of the program?

The Lowland Tapir Conservation Initiative has been able to conduct long-term research for the past 20 years thus promoting Lowland tapir conservation. Lowland tapirs are the largest land mammals in Brazil and a keystone species. The collaboration between zoos and wildlife researchers helps preserve and conserve these beautiful creatures. 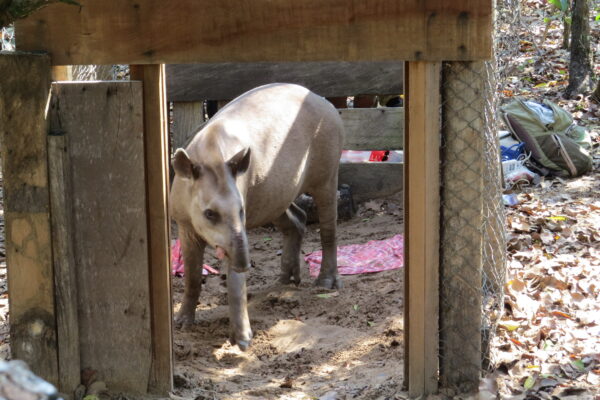 Tapir waking up after an exam.

Most memorable experience from your trip?

One of the most memorable experiences is seeing a young tapir. After tracking down a female tapir (via radio collar) and performing a procedure, we got to see her juvenile tapir. Overall, getting to see tapirs in their natural habitat was surreal. Their habitat is truly a magical place and I am honored and proud to be able to be a part of conserving it.

What is the biggest personal or professional take-away from your experience?

I learned so much on my trip! This was an eye-opening experience. It takes a lot of passion, time, blood, sweat and tick bites to be a wildlife researcher. Dr. Medici and other members of the group provided invaluable lessons regarding all of the efforts needed to conduct conservation research in the current state of the world and the political and environmental pressures that are often included. Not soon after I left, this group had to fight fires started by arsonists in the Cerrado, the Brazilian savanna. These people have invested so much time, emotion, and money into studying this area and helping preserve it. To see it burn is absolutely heartbreaking. It really hits home to think of all of the other forests around the world that are being cleared by fire, either by nature or man (the majority of that being man).  We have such an effect on this world and we need to be active.  When guests ask me at the Virginia Zoo, “What can we do to help?,” I say tell them that one small thing everyone can do is buy products that do not contain palm oil, or to buy products that contain sustainably farmed palm oil. Palm oil is a major cause of habitat destruction for many species of animals. This land is precious! We need to help preserve it.

Come visit us at the Virginia Zoo on World Tapir Day next year to learn more, help conserve our species, and have fun! We also offer behind-the-scenes tours where I or another Keeper will personally answer all of your questions about our Malayan tapirs Haddie and Rosco, as well as their counterparts in the wild.

Chelsea’s conservation and research trip is just one of many great examples of Virginia Zoo Keepers taking action outside of their daily animal care routines. All of our Keepers do amazing conservation work at local, national and international levels. The Virginia Zoo is lucky to have such dedicated, committed, and caring staff to tend to the animals on our grounds, as well as off grounds.