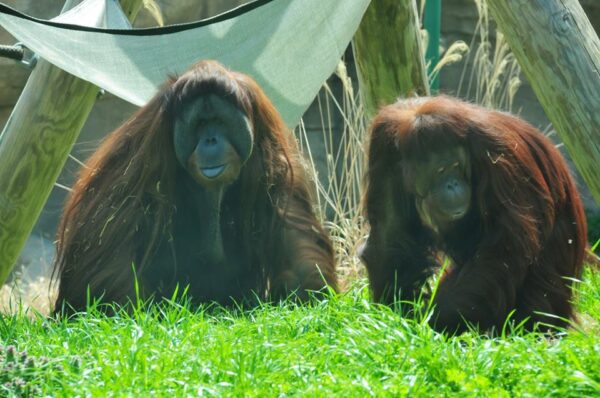 Tales of the TailsThe People of the Forest

We’re not monkeying around…. Orangutans aren’t monkeys! They are primates, but orangutans, gibbons, siamangs, chimpanzees and gorillas are all apes – not monkeys. But how do you know the difference between the two? Monkeys have tails which they typically use for balancing, swinging from branches and sometimes to hold items, such as food. Apes, on the other hand, lack this extra-long body part.

What else do I need to know about orangutans? Well, for starters, the word orangutan means “people of the forest”. These arboreal mammals are relatively large and can only be found in tropical and swamp forests in Asia, specifically on the Southeast Asian islands of Borneo and Sumatra. They’re widely known for their vibrant orange colored hair, which is also given in the name orangutan. 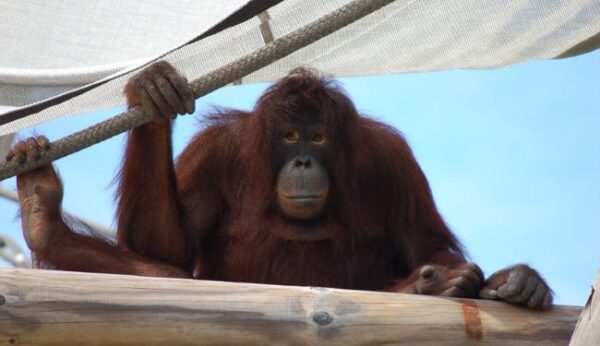 There are two species of orangutan: Bornean and Sumatran. The species name indicates the location of their habitat in the wild, as well as a few other subtle differences. Sumatran orangutans have long, lighter colored hair. Males and females can both grow facial hair, but only males can grow large, rigid cheek pads, which are called flanges.

Bornean orangutans typically have much larger bodies and flanges than Sumatran orangutans, and they also have a large pouch under their throat. The hair on these orangutans is usually shinier and the females will lack facial hair.

Not all male orangutans grow large flanges, but this doesn’t hinder them from finding a mate. Orangutans are usually solitary, but will pair up for a few days at a time for breeding. After a gestation period of eight to 10 months, a female orangutan will give birth to one or two infants. Then, there is a seven or eight year period where she does not mate.

Orangutans have the slowest reproduction rate of all mammals. One reason they reproduce so slowly is that the infants will stay close to their mothers for five to seven years before venturing out on their own. Their infrequent reproduction isn’t the only reason the number of orangutans is declining. 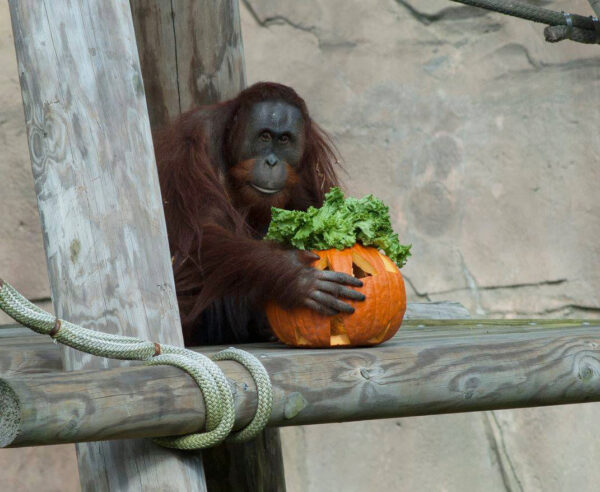 Orangutans, both Bornean and Sumatran, are critically endangered according to the International Union for the Conservation of Nature Red List. It is estimated there are less than 54,000 Bornean orangutans and 6,000 Sumatran orangutans left in the wild. There are several threats to both species, including poaching, exploitation in the illegal pet trade, human-animal conflict, and the biggest threat is habitat loss.

Orangutans live in forests that are rich in palm oil, a product that is found in more than half of packaged products in supermarkets around the world. Their habitats are being cut down and destroyed to harvest palm oil, killing the orangutans and forcing them outside of areas where they were once under protective laws.

How can I help? Manufacturers, government organizations and others have collaborated to create the Roundtable on Sustainable Palm Oil. This organization promotes the production and use of sustainable palm oil, which is harvested from farms where orangutans do not live. You can help support orangutans by buying products approved by this organization, as well as products that do not use palm oil. The Virginia Zoo only purchases sustainable palm oil candy and treats for its annual ZooBoo event, and we guarantee it’s easy for everyone to do! The Cheyenne Mountain Zoo has an app dedicated to helping you find out which foods you eat are palm-oil friendly.

The Virginia Zoo’s orangutans are a part of a Species Survival Plan® established by the Association for Zoos and Aquariums. This program oversees and manages the orangutans’ population in zoos by monitoring breeding to prevent overpopulation and inbreeding, and also ensures the species’ survival in the wild through conservation efforts such as programs to combat illegal palm oil harvesting.

There are four orangutans at the Virginia Zoo, each with their own unique personality – Schnitz, Pepper, Dara and Solaris.

Solaris is the youngest of the four at 14 years old. He was born on June 22, 2003 at the Houston Zoo and he is a Bornean orangutan. Solaris came to the Virginia Zoo in May 2014, leaving his mother Kelly and sister Aurora at the Houston Zoo. Solaris solicits attention, especially from his Keepers. He enjoys eating alfalfa and applesauce and has a variety of hobbies. Guests can usually see him watching Pepper and Schnitz at the shared window between the indoor and outdoor orangutan exhibits, but Solaris also enjoys sleeping or hiding in wheel barrels or big tubs with a cozy blanket or sheet.

Solaris shares his exhibit with fellow Bornean orangutan and mate, Dara. Dara was born on September 23, 1999 at the Seneca Park Zoo in Rochester, New York. She arrived at the Virginia Zoo in April 2014. Keepers say that Dara is very smart, and her quick learning shows during training sessions. She loves to drink juice and eat different types of nuts. Her favorite hobbies include gathering straw to build nests, napping and making noises by clapping or using her mouth to get attention.

Pepper and Schnitz can be found in the indoor orangutan exhibit. Both are a hybrid orangutan species with similar interests.

Born on June 27, 1982, Schnitz is the largest orangutan at the Virginia Zoo. He has large cheek flanges and weighs almost 270 pounds. Schnitz enjoys eating mixed nuts and watching Dara and Solaris at the shared window, but he also enjoys playing with blankets and barrels. Schnitz is often seen doing what he does best – sitting with a blanket over his head! Keepers say he is very shy and sweet-natured.

Pepper is 37 years old, born on May 22, 1980. She came from the Brookfield Zoo in Chicago in November 2010. She enjoys eating alfalfa, nuts and raisins and will almost always try to get “the good stuff” before Schnitz. Pepper is always the first to run into the exhibit when enrichment is set up, and her favorite hobby is washing “laundry” in soapy tubs. She is also very clever and will often retrieve and trade items with her Keepers.

November 12-18, 2017 is Orangutan Caring Week, a week honoring and raising awareness for these incredible creatures. You can also contribute to saving their species by donating to our Conservation and Research fund here.