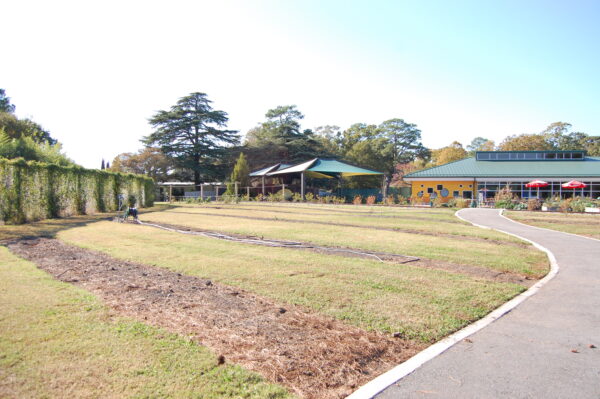 The Zoo’s orchard, located within the Animal Wellness Campus, has been hit hard by a destructive disease which has affected all of the Asian pear fruit trees. Fire blight, caused by the bacterium Erwinia amylovora, is a common and frequently devastating problem for these species of trees and related plants. This bacteria tends to move in trees from infection sites toward the root system. Infected flowers and flower stems, during the spring season, wilt and turn black. During the fall season, leaves on infected pear shoots will begin to have a red appearance and then turn black.

Splashing rain or insects transmit this bacteria to nearby blossoms or succulent growing shoots. Once blossoms are contaminated with the bacteria, pollinators (honey bees) become carriers that are very efficient transmitters of Fire blight. The disease can destroy limbs and even entire shrubs or trees. Stressed trees are also more susceptible to injury and disease.

The development of Fire blight is influenced primarily by seasonal weather. Ideal conditions for disease development are when temperatures are between 75° to 85° Fahrenheit and are accompanied by wind, rain or hail. When weather conditions are optimal to Fire blight development, it can be difficult, if not impossible, to control this disease. It is important to dip shears or other gardening tools used to cut away dead branches in 10 percent bleach to make sure the disease isn’t transmitted to other plants or trees.

It is very difficult to combat tree and plant diseases without the use of chemicals. For home growers, a mixture of Bordeaux or other copper products applied several times as blossoms open, might reduce new infections, but won’t eliminate all new infections or those already existing in the wood. Ultimately, the Horticulture staff decided to remove all trees to eliminate further destruction, as two other pear trees were detected with Fire blight elsewhere on Zoo grounds.

Choosing Fire blight resistant trees is the best answer and ornamental trees tend to be less susceptible to Fire blight.

The horticulture team will be planting new orchard trees in the Spring of 2018.

Disclaimer:  The Zoo’s Horticulture Department’s suggestion to use Bordeaux mixture or other chemicals for home growers is intended to provide helpful and informative material; however, proper use and instruction materials should be followed as noted on chemical labels and in conjunction with consideration for animals, humans and the environment.