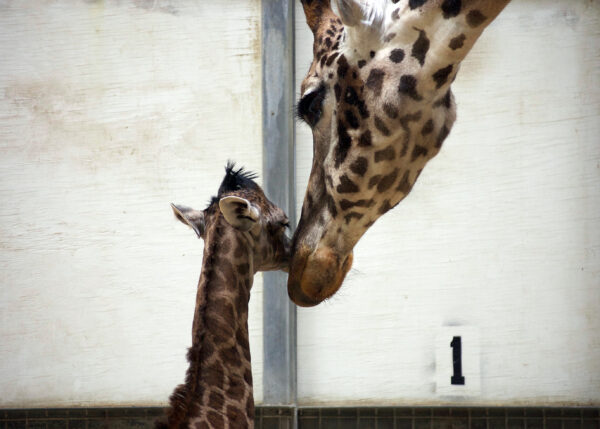 Tales of the Tails Animal StoriesHigh There!

What animal is known for its unique spots, long neck and for being the Watchtower of the Serengeti? What about the animal from Africa that can run up to 35 mph? It’s also the tallest animal in the world and has, on average, a 25 pound heart! Have you guessed it yet?

Despite being the world’s tallest land animal, there is no one explanation as to why giraffes are so tall. They have seven vertebrae in their necks, exactly the same as humans have, so why are their necks so much longer than ours? One theory is that giraffes’ necks extend higher than others to reach food other animals could never get, giving giraffes an advantage. Male giraffes also compete for breeding rights with females by swinging their heads and long necks at each other.

While one species (with nine subspecies) of giraffe is currently recognized, recent research has shown that there are four distinct species of giraffe. Two of these species have two and three subspecies respectively.

Due to an approximately 40% decline in the giraffe population during the past three decades, their conservation status has been uplisted to Vulnerable on the IUCN Red List of Threatened Species, meaning they are now closer than ever to becoming extinct. Factors contributing to their demise include habitat loss and poaching.

Male giraffes can grow up to 20 feet tall, while females can grow to be up to 16 feet tall. When giraffes are born, they have an abrupt entrance into the world as they can fall at least five feet to the ground as the mother gives birth standing up.

Giraffes spend most of their lives standing up. In addition to giving birth while standing, they also eat, drink water and can even sleep standing up. Despite being the tallest mammal, giraffes have to awkwardly spread their legs apart and bend down to drink water, because their necks aren’t long enough to reach the ground. They also only sleep up to 30 minutes in a 24 hour period, which usually occurs in multiple two-to-three minute naps. 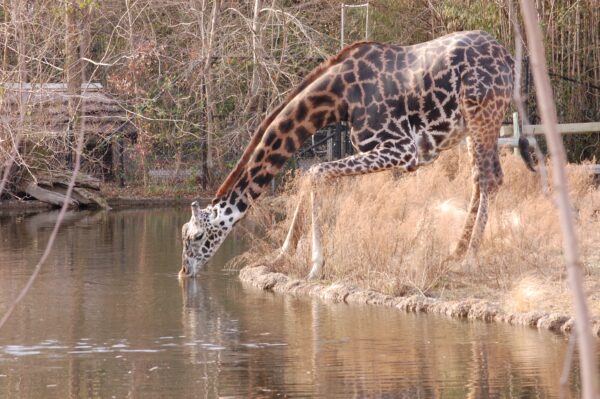 Giraffes don’t need much sleep to survive, and their lack of resting time helps them stay more alert for predators in the wild, such as lions and crocodiles. They also have hooves that measure over a foot wide, which they use for defense. Giraffes will often kick predators with their strong legs, stunning or even killing their attacker. Giraffes become especially defensive when they have their young nearby.

Giraffes give birth to one calf after a long 15 month gestation period. When the baby is born, it can stand within a few hours and can measure over six feet tall. The calf will reach maturity at around three years old, and can start breeding at this time.

Another interesting fact about giraffes is that they have two “horns” protruding from their head. These are called ossicones. They are used as weapons when males fight for dominance for mating rights. Giraffes are born with their ossicones. However, they lie flat and are not attached to the skull to avoid injury at birth, and straighten out shortly after birth. 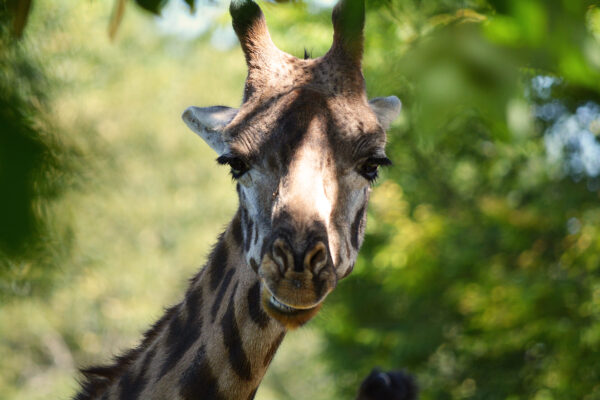 Virginia Zoo enthusiasts are very familiar with our Masai giraffes, which welcomed a newborn female calf into their herd, otherwise known as a tower. The calf, which will earn her name via a public naming contest, weighed 149 pounds and stood almost six feet tall. The calf shares the same exhibit in the Africa – Okavango Delta as her mother Imara, father Billy and other resident female Noelly.

Zoo Keepers say the calf has been developing very well. She is still drinking her mother’s milk, but has been munching on browse already. She is very curious and appears to enjoy exploring her new surroundings. Zoo staff and guests alike are in awe of how cute she is, and her crooked ossicone only adds to her cuteness. 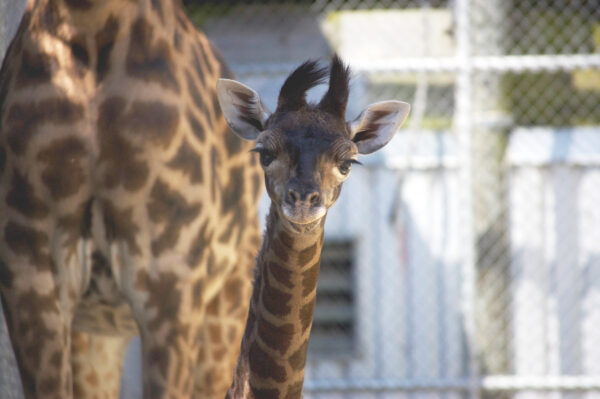 Imara, the calf’s mother, has been at the Virginia Zoo for much longer than her offspring; since 2003 to be exact. Imara was born at the Roger Williams Park Zoo in Providence, Rhode Island on April 4, 2002. This 15 year old giraffe still has a lot of years left in her life, as giraffes under human care can live to be up to 30 years old. She’ll eat just about anything, but is especially fond of Hackberry, Mulberry, Magnolia and Bamboo. At 16 feet tall, Imara’s daily diet consists of her favorite foods as well as 13 pounds of grain, alfalfa and browse; produce such as carrots and sweet potatoes are usually given to her during training sessions or behind-the-scenes giraffe tours. Imara usually spends her time browsing around her exhibit, probably because she seems to want to be aware of her surroundings at all times, especially with a newborn. Imara can also be seen dropping her chewed cud on the ground frequently.

Giraffes are ruminants, which are mammals that are able to acquire nutrients from plant-based food by fermenting it in a specialized stomach prior to digestion, then regurgitating it to chew on again before swallowing it to fully digest. Cud is the matter that they chew on after regurgitating it from their stomach.

Billy, Imara’s five-time mate, was born on July 6, 2001 at the Cleveland Metroparks Zoo. Less than a year later on May 22, 2002, Billy arrived at the Virginia Zoo. Billy is a massive giraffe, standing at almost 19 feet tall! His diet requires him to eat 12 pounds of grain including alfalfa and browse, as well as produce for training and behind-the-scenes tours. His favorite foods appear to be Mulberry, Hackberry and Magnolia. Billy is considered the quickest learner by his Keepers, and he appears to enjoy learning new things. He also enjoys laying in the sun and following the other female giraffe, Noelly, around their exhibit.

Noelly is the Virginia Zoo’s other mature female giraffe. She is around four years old and came from the Brevard Zoo in 2015. She is a lot shorter than Imara and Billy, standing only a little over nine feet tall. Noelly also has a smaller diet which consists of 10 pounds of grain and produce given to her during training sessions and tours. She loves eating pears and apples for enrichment, as well as the same types of browse as her older exhibit-mates. Noelly enjoys “hanging out” with Imara, and has been very fond of the new baby. Zoo Keepers know Noelly as the shy, but sweet giraffe.

When visiting the Zoo, guests can see Billy and Noelly in the outdoor Africa – Okavango Delta exhibit, while Imara and calf are in the indoor stalls and outdoor holding yard as the baby gets more acclimated to her new surroundings.

Are you obsessed with our newest giraffe? Guests can now take home their very own mom and baby giraffe duo by “zoodopting” them through our adoption program, which provides for our giraffes’ needs for an entire year. This special won’t last long, so get yours today! 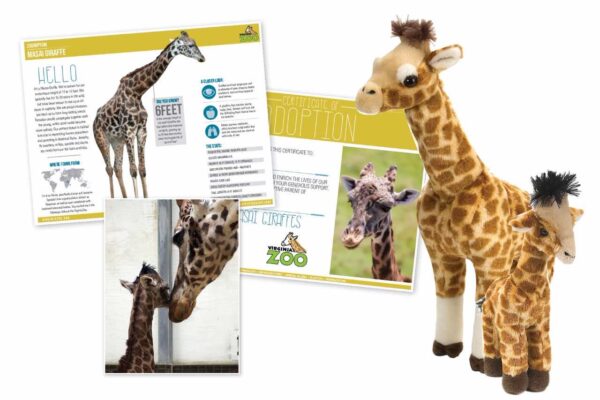 Become a Watchtower of the Serengeti and be on the lookout for next month’s Tales of the Tails featuring our ZooFarm’s Dexter Cattle!