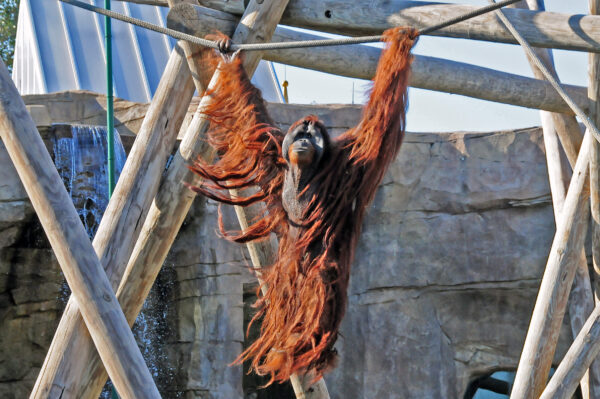 As most of you are aware, today is an international holiday where millions of people all over the world fall victim to tricks, pranks and jokes. While April Fools Day is fun and “emusing” to humans, some species of animals are also known for being the ultimate tricksters, especially when it comes to survival. Here are some of the trickster animals you can find at the Virginia Zoo!

Virginia opossums are famous for entering a defensive catatonic state, commonly known as “going opossum”. During this death feigning behavior the animal becomes motionless, which may last as little as a minute or it may continue up to six hours. This behavior is relatively rare and is most frequently displayed in young opossums. Instead, it is more common for a threatened adult to bare their teeth and stand their ground, or flee.

The Virginia Zoo has two opossums, siblings Seamus (left) and Fiona (right). The two were hand raised by vet staff since birth, and are currently animal ambassadors for education programs. Because of their training and conditioning to be around people and other animal ambassadors, Seamus and Fiona have not exhibited the behavior that other wild opossums would.

Bornean orangutans, despite being a larger species of ape, often become prey to leopards and tigers in the wild. The species has developed a way to help fend off the big cats. When they sense a predator is nearby, the orangutans make kissing noises with their mouths while deepening their voice, and often use leaves to make the sound even more intimidating. The deeper the “kiss squeak”, the bigger the orangutan sounds, which will ultimately ward off any predator looking for an easy prey.

When threatened, Madagascar hognose snakes will hiss, flatten their necks and raise their heads off of the ground like another type of snake known as the cobra. Using this mimicry, which is acting like another animal, the hognose will deter any predator that comes near. If this technique doesn’t work, the snake will then roll onto its back and play dead. It can even emit foul smelling scents and hang its tongue out of its mouth while drooling blood. While these acts of deception are very intriguing, they rarely occur, as Hognose snakes mostly try to avoid predators by burrowing in leaves or sand.

Harley and Nova are the Virginia Zoo’s two female Hognose snakes. They have both been trained as animal ambassadors and live behind-the-scenes in the Program Animal Building. The two snakes are used in education programs, in which the animal handlers discuss their deceptive tactics to fend off predators.

Not just Malayan tigers, but all species of tigers and some other species of big cats have large white circles on the backs of their ears. While there is no exact proof of what they are for, many zoologists believe these “eyes” on their ears are used as guides to help the cubs find their mothers when following behind them, or to ultimately trick other predators. The white “flashes” are believed to trick predators that are hunting the tiger from behind into thinking the tiger has spotted them.

This unique looking snake has the best advantage in its native rainforest habitat. The snake’s green color blends in with its surroundings, otherwise known as camouflage. A Rhino rat snake will sit very still in lush greenery while waiting for prey to kill. The prey, which includes rats and other small rodents, has no idea there is a predator near, ultimately aiding in its demise.

Have a happy April Fools Day, and stay alert for tricksters!