Animal StoriesTales of the Tails – It’s Binturong and oh so right!

It’s a bear. No, it’s a primate. Or maybe it’s a cat. Actually, it’s neither one of those animals. It’s a binturong!

Also known as bearcats for their resemblance to the two animals, binturongs are actually not related to bears or cats. Binturongs are from the Viverridae family, an ancient group of small-to-medium-sized mammals found only in the eastern hemisphere.

Binturongs have long bodies covered in coarse black fur, with gray or red highlights. On the end of their body is a prehensile tail that is almost as long as their body, which is used as an aid in climbing. Binturongs are arboreal and will use their tails as an anchor when trekking from branch to branch and to keep them from falling off of the branch while sleeping. 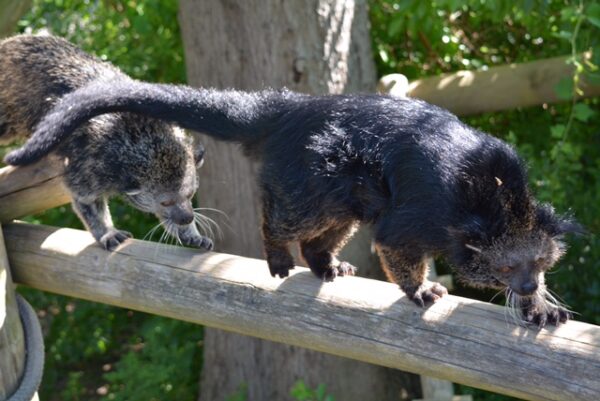 Despite being classified as a carnivore, binturongs are mainly frugivorous. This means they mostly eat fruits, but will occasionally eat eggs, plant shoots and leaves, small invertebrates, fish, birds and small mammals.

Binturongs come from the dense tropical rain forests of Southeast Asia and are not often spotted in the wild. The species is considered as vulnerable to extinction due to the rapid 30 percent decline in several populations over the last 30 years.

The Virginia Zoo participates in a Species Survival Program® for binturongs and donates to several global conservation efforts to help save bearcats from going extinct. This program oversees and manages the species’ population in zoos by monitoring breeding to prevent overpopulation and inbreeding, and also ensures the species’ survival in the wild through conservation efforts such as educational training programs. Maximizing the genetic diversity of the species through breeding is also a priority of the SSP, which is why animals are often transferred to different zoos.

The Zoo has two binturong exhibits, and when guests approach the enclosures we often hear them say, “I smell popcorn!” Binturongs, like most other vivverids, have scent glands that emit a unique odor. The scent that binturongs give off smells like popcorn. Or does popcorn smell like a binturong? Either way, the smell isn’t to entice visitors to come join them for a buttery snack, but is used as a warning to other animals, and mostly to let other binturongs know that it’s time to mate!

In Asia – Trail of the Tiger, guests can find one of two binturong exhibits. Male Tasik and female Suzy can be found here, perusing the branches in their enclosure.

Sixteen-year-old Tasik is a light-colored binturong with blonde, sleek hair. He weighs about 30 pounds and measures over three and a half feet long, not including his tail. His tail is over a foot long, measuring at about 18 inches.

According to his Keepers, Tasik seems to enjoy finding his favorite snack – grapes, in puzzle feeders and balls. However, Tasik apparently enjoys napping the most, as he is seen sleeping on the highest structures in the exhibit during the majority of the day. He prefers to sleep up high, usually on the highest shelf inside or in the upper nest box next to the guest pathway. Keepers often refer to Tasik as a gargoyle because of how he sits on top of the tallest climbing structure peering down into the exhibit.

Suzy is Tasik’s exhibit mate. Born on July 18, 2000, Suzy is 16.5 years old. She was born at the San Diego Zoo in Calif., then was moved to the Fresno Chaffee Zoo in Calif. In December 2010, Suzy arrived at the Virginia Zoo and has been here ever since.

Suzy is darker in color than Tasik, has fluffier and bushier hair, and has reddish/rust colored highlights. She weighs 32 pounds and is almost four feet long with an 18 inch long tail.

Suzy appears to like almost the same things as Tasik does. Keepers say her favorite food is grapes, and that she also enjoys puzzle or ball feeders. Suzy loves to nap, but she is the opposite of Tasik in that she loves to nap on the ground in the warmth of the sun instead of up high.

Before moving into the enclosure with Tasik, Suzy and her mother, Mercedes, lived together. A little-known fact about Tasik and Suzy is that despite being older binturongs, the pair have never been parents. Another interesting fact about the couple is that they are trained to sit on scales to be weighed every month.

Across the Zoo, located in the ZooFarm, is where the second binturong exhibit is located. Male Rungus and female Bee live in the enclosure that splits between the inside and outside of the yellow barn.

Rungus was born on July 2, 2002, making him 14 years old. He was first at the Aquarium of the Pacific in Long Beach, Calif. and then moved to the Fresno Chaffee Zoo in Calif. On December 17, 2010 Rungus finally made his way to the Virginia Zoo.

Rungus is a large, dark colored binturong, weighing in at 41 pounds. Rungus enjoys being both on the ground and up in the houses outside, and inside he usually stays close to the ground. Binturongs are nocturnal, so you’ll see Rungus sleeping the majority of the day. When he’s not sleeping, Rungus enjoys enrichment set out for him by his Keepers. His favorite type of enrichment involves anything with food.

Bee shares the exhibit with Rungus. She was born on November 23, 2012 and is four years old. Before coming to the Virginia Zoo on April 2, 2015, Bee lived at the Singapore Zoological Gardens. She enjoys sleeping much of the day, but is fond of enrichment too.

Bee is smaller than Rungus, weighing 27 pounds. She is also light in color and prefers to sleep high up, whether it’s inside on the highest shelf or outside in the tallest box.

Even though the Virginia Zoo has four thriving and healthy binturongs, the species as a whole is listed as vulnerable in some parts of their range and endangered in others. They are currently at risk due to several factors including habitat loss, the fur and pet trade, and poaching for medicinal purposes. Binturongs are also considered a delicacy in some nations, and are hunted for food.

If you can’t make it out to the Zoo to see Tasik, Suzy, Rungus and Bee, you can still support the binturongs by donating to the Virginia Zoo Keeper Fund or Conservation and Research Fund, which ensures the well-being of these animals during their stay at the Zoo, as well as the conservation efforts currently in place to help their relatives in the wild. Donate today to help save binturongs across the world.