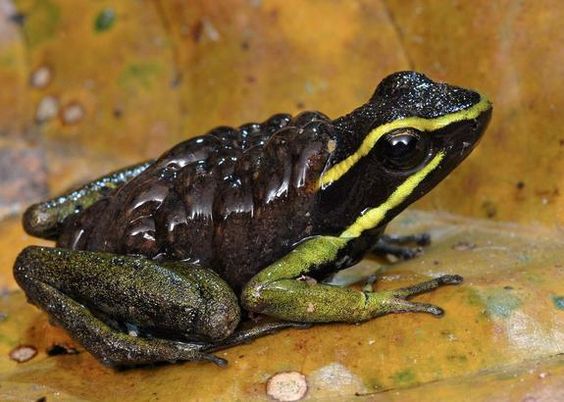 An American folk event, this holiday made its debut in Al Capp’s Li’l Abner comic strip in 1937. Sadie Hawkins was a lonely girl who grew tired of waiting to be asked on a date by any young man in her town. As she aged, her father was also worried she would never marry, so he gathered all of the local eligible bachelors for the start of Sadie Hawkins Day, a day in which Sadie would get to marry the man that she could catch in a foot race. The townspeople liked the holiday so much, they made it an annual affair. This holiday also inspired real-life situations where gender roles became reversed, and women would ask men out on a date or for their hand in marriage.

In the animal kingdom, there are several species of animals that have reversed gender roles, not in dating or marriage, but in reproduction. In this role, the males will either give birth and/or take care of the young instead of the females.

The most notorious animal in which the males give birth to offspring is the seahorse. After courting with each other, a female seahorse implants her eggs into the male seahorse’s pouch, which is where the eggs will become fertilized. The male seahorse will then incubate the eggs in his pouch, which regulates the temperature, blood flow and water salinity of the eggs to prepare the future babies for life in the ocean.

How many babies will he ultimately deliver? Depending on the species of seahorse, anywhere from five to over 1,000 eggs can hatch, with a very small number of them actually surviving and reaching adulthood.

One theory as to why males carry the young instead of the females is so the females have a larger turn-around time for producing more eggs. Not having to care for possibly over a thousand babies gives mom more time to make eggs that she can give to the male seahorse once he’s given birth. 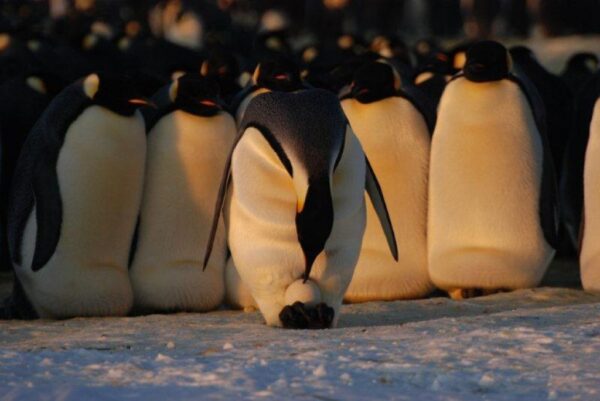 Father Emperor penguins huddle together while keeping their eggs warm

Emperor Penguins are also known for their reversed paternal and maternal roles. Once the female lays her egg, the male will put the egg on top of his feet and cover it with his a pouch of the skin on his body to keep it warm. He watches over the egg for up to 65 days in frigid temperatures while huddling for warmth with other father penguins. During this time, the mother penguin will leave and travel up to 50 miles away in search of food. After her journey, she returns to a newly hatched chick and regurgitates her food to feed the baby penguin. Now that mother penguin has returned to take care of her hatchling, the male penguin leaves in search of food for himself and returns in time to see his offspring as they head off into the world on their own.

A male cassowary and his chicks

Male Southern cassowaries, which are some of the Virginia Zoo’s current residents, do all of the child care – they lay on the eggs and care for the babies for up to nine months after they hatch, which includes teaching the chicks how to forage for food.

This single parent goes through a lot while caring for his unborn chicks. He has to protect them in the nest 24/7, which means no hunting for food or water. He also shuts his bowels off and doesn’t use the bathroom until the eggs hatch.

Where is mama bird at this time? She’s long gone. Female cassowaries breed, lay their eggs, abandon them with their current cassowary mate and disappear to breed again elsewhere.

Several other species of animals also have reversed gender roles. Another Zoo resident, male emus are similar to cassowaries in that they incubate their eggs in the nest until they hatch. 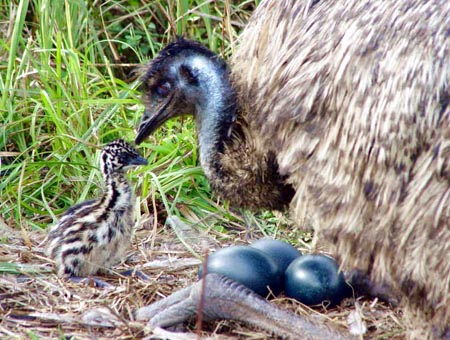 Emu with its nest and newborn chick

Some species of male frogs also care for their young, including the Poison Dart frog. The father frog will often watch over the tadpoles and keep them from drying out by either urinating on them, or carrying the eggs or the young on their backs to water sources where they can eat algae and develop on their own.

Whether it’s mom, or in this case dad, caring for their babies, we’re just glad to see these adorable baby animals well taken care of!