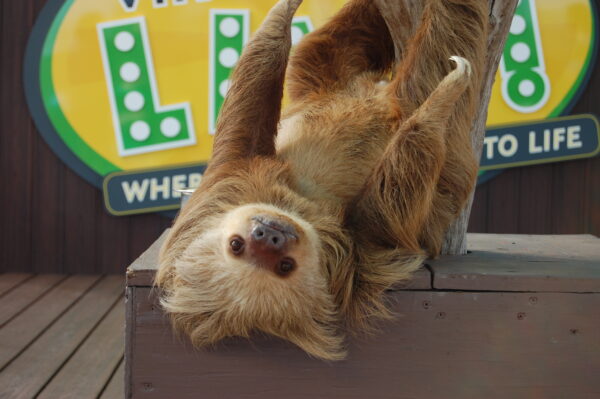 Today marks the celebration of International Sloth Day! This holiday exists to help educate the public about the well-being of sloths, conservation efforts being made to help them thrive in the wild and to celebrate the lives of these cute, sleepy creatures.

Sloths can be found in central and South America and typically live in tropical rain forests. There are two different types of sloths, and six different species:

Pygmy sloths are critically endangered and maned sloths are vulnerable to extinction due to loss of habitat.

The Virginia Zoo has its very own sloth, Dudley! Dudley is a Hoffman’s two-toed sloth and is originally from the Republic de Panama. He has been a Zoo resident since May 1979, and is estimated to be around 38 years old!

Dudley is one of our Program Animal Ambassadors. He began training in March and made his debut with Program Animal Coordinator Stephanie Peters at the premiere of the movie Zootopia earlier this year. Since his debut as a program animal ambassador, Dudley has made several appearances on the Virginia ZooLive! Stage.

Despite being in sloth showbiz, Dudley really enjoys doing what sloths do best: eating hearty meals and taking naps. Dudley loves eating grapes, romaine lettuce and yellow squash. His keepers make sure any of the produce he gets fed is cooked due to Dudley’s dental issues. After a good meal, Dudley doesn’t hesitate to rest his eyes for a few hours. After all, sloths need about 15-20 hours of beauty rest, and Dudley always makes sure to look his best!

When Dudley has free time, he enjoys roaming around the branches in his enclosure and relaxing in his milk crate – which often ends up being his nap spot. Keepers also entertain Dudley with enrichment on a daily basis.

In celebration of International Sloth Day, Dudley is scheduled to make an appearance at the Virginia ZooLive! Stage at 1pm on Thursday, October 20!

Dudley is available for Zoodoption, sloth merchandise will be for sale on-site, and so much more!

Make sure to join us at the Zoo to celebrate Dudley and sloths everywhere!